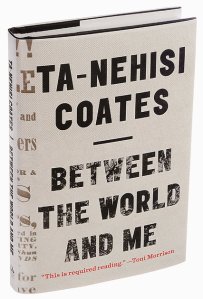 I read this book in spite of its popularity, not because of it. I read it in a day and can’t quite imagine doing otherwise – this isn’t the sort of volume from which one can be easily distracted. In writing incisively about matters that are highly timely – the Black Lives Matter movement and the series of assaults on black men by white police officers that brought it about – Coates frames the book as a letter to his son Samori, whom Coates saw leave the room in tears when he learned that Darren Wilson would not be punished for the killing of Michael Brown. Coates, who is exactly my age, grew up in a stable family within a dangerous Baltimore neighborhood. He was well cared for (though sometimes punished violently; his analysis of the role of parental fear in family violence is excellent) and educated, though his treatment of public schools that emphasized rote learning and obedience is scathing, and he enrolled at Howard University, which he calls “the Mecca” and where he learned that black skin did not have to be synonymous with poverty, gang violence, and fear-driven ways of thinking. He portrays Howard as a deeply intellectual and creative place where he experienced a life-altering awakening to his own intellectual potential – but he also portrays it as a bit of a fairy land, a place that in his experience did not reflect or even acknowledge the realities of race relations in this country. Samori was born into somewhat precarious circumstances, in that his parents were unmarried and still undergraduates – but both Coates and his then-partner were responsible and came from responsible and supportive families, and Coates dropped out of Howard before he graduated to train himself as a freelance journalist, becoming over time one of the most well-respected writers on the contemporary African-American experience. As a result, he and the other adults in Samori’s life have largely been able to protect Samori, and the boy’s initiation into the widely-publicized incidents of white-on-black police violence shocked Coates out of his parental (though not personal) complacency just as much as it shocked Samori.

The central message of the long letter to Samori that comprises this book is that black people in the United States do not own their bodies. Clearly this is a legacy – probably the primary legacy – of slavery. When the economic spine of a democratic nation is built around the hypocrisy of slavery, the cognitive dissonance required of its leaders – and in some level this includes all whites, who take advantage of the safety of their skin color even if their lives contain few other privileges – is unfathomable to me. I started to consider this question on my own for the first time about eight or nine years ago when I picked apart Narrative of the Life of Frederick Douglass in order to teach it in an 11th-grade English class. Like most new-ish teachers, I started with the obvious effects of the slave system: the breaking up of black families, the pattern of enforced illiteracy and ignorance, a deeply-bred distrust among slaves of everyone except a trusted few. Once I started, though, it was hard to stop. I saw the systematic way that young white people were taught to blind themselves to the full humanity of slaves, even when their untrained eyes inclined themselves to recognize and even embrace it. I saw the legacy of slavery in the culture of the rural south, obsessed both then and now with the paranoid (and armed) protection of one’s property, not only because of fear of theft but because of repressed guilt, which bred a need to keep the realities of what exactly happened on these plantations a fiercely-guarded secret. I made the connection between the “well-regulated militia” of the second amendment and the constant fear among whites of a slave rebellion. Douglass is subtle on this point, but he does allude to the constant triangular tension between wealthy slave-holding whites – their own bodies gone somewhat to seed by their easy lives – the poorer whites who often worked as overseers, working in some cases as many hours per day as their slaves but almost always distinguishing themselves by spectacular cruelty, and a much more numerous slave population strong in body yet constantly on the verge of exhaustion and starvation, their lives lived at the very bottom of Maslow’s hierarchy of needs yet still a nonstop perceived threat to their overlords. This dynamic laid out in Douglass’ Narrative is the same one played out in the ongoing episodes of police (and other) violence in recent years that have given rise to the Black Lives Matter movement. The Darren Wilsons and George Zimmermans in these equations are the equivalent of the poor white overseers – placed in positions of authority in spite of what may be generations of deeply-repressed, poorly-understood fear. The legal context of today’s violence has changed – though not as thoroughly as it should have – as have the setting and details of the incidents, but this central idea that Coates returns to again and again – that African Americans have never regained sovereignty over their bodies after the legal end of slavery – is true.

I know, I know – this review of Coates’ book is not really supposed to be an essay about me. I didn’t set out with the intention of writing so much about my own growing understanding of my country’s deep racial dysfunction. But I suppose I lingered so long here because I want to say that I get it. Like everyone else, I was born into a time, place, and body that I did not choose. As a white woman, I think I fear for my body a bit more than white men do – but I’ve also been convinced over and over and over again – by Frederick Douglass, by Richard Wright, by Ralph Ellison, by James Baldwin, by Toni Morrison, and now by Ta-Nehisi Coates – that the physical helplessness of African American men and women exceeds anything I have experienced personally. My understanding of this helplessness came mostly from reading – and from being pushed by very intelligent students to articulate what I saw in the books I read (this is one of the greatest benefits of teaching – you know, aside from the free T-shirts and the constant migraines) – so I empathized with Samori, who encountered the repressed dysfunction of his comfortable world on TV and online.

In spite of the fact that I did have some background in the subject matter, I had to do more Googling while I read this book than I am comfortable admitting, and I left this book with a rich and enticing reading list. The sections devoted to Coates’ intellectual coming-of-age at Howard are a treasure map of black scholarship in history, anthropology, literature, and other fields, consisting mostly of authors and titles that are new to me. While Coates’ book fits securely in the tradition of DuBois, Ellison, Baldwin, Malcolm X, and other black intellectuals who are part of the canon as I studied it, Coates actually spends little time discussing these authors directly. He assumes we know their work already – or at least that we know where the nearest library is if we don’t. I like it when authors take their readers seriously in that way – even if I was humbled by all the Googling I had to do.

This book is already a phenomenon on 2015’s literary scene, but I do encourage you to read it if you haven’t done so. You won’t feel preached at. This is a consequence of Coates’ choice to structure the book as a letter to Samori, I think. A reader with a little congenital defensiveness is allowed to sit on the sidelines if he chooses, focusing on the intimacy of the communication between father and son rather than the larger implications of Coates’ message for all Americans. Most will eventually allow themselves to be invited in, I think. Coates is wise and honest, and he is not afraid to mine his own vulnerability as he probes the deeply dysfunctional social system that is woven into our social systems, our constitution, and our assumptions and emotions as individual citizens of our complicated, wounded country.