A Review of Ta-Nehisi Coates’ The Beautiful Struggle 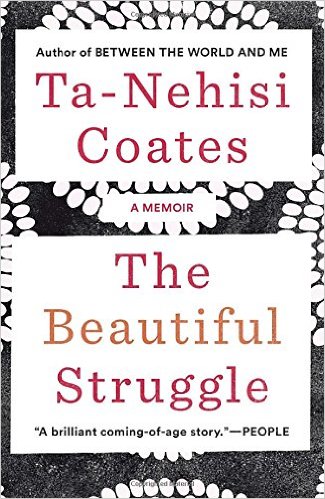 Earlier this year I reviewed Ta-Nehisi Coates’ new and highly-praised memoir Between the World and Me, and you can read my review of that book here. The Beautiful Struggle, published in 2008, is just as good. I read it in a few sittings over the course of about a day and a half, and I was totally engrossed. This is Coates’ coming of age narrative and intellectual autobiography; it’s also a sociological study of the culture in which Coates grew up. It’s about the strange, terrifying, and in some ways numbing experience of growing up in a vulnerable neighborhood in Baltimore just a few years before the time period documented in The Wire while also being Coates’ father’s fifth child born within seven years to three different women. It’s certainly also a memoir of family, but “family” is defined nontraditionally. Coates’ father fought fiercely against the intellectual (not to mention physical, psychological, and emotional) stunting of African American communities that live in ghettos like the one Coates grew up in. For years he ran a press out of his basement with the goal of reprinting and distributing works by African American intellectuals and activists that were otherwise unpublished or out of print. He also worked as a librarian at Howard University (referred to in both of Coates’ memoirs as “the Mecca”) and working what was probably a third full-time job shepherding five teenagers through their inner-city adolescence, away from drugs, violence, and crime and out of prison.

This memoir is also a wake-up call for people, like me circa a couple of weeks ago, who imagine that Coates emerged fully-formed as a staff writer for the Atlantic. This memoir makes clear how tenuous Coates’ adolescence was, how many escape strategies he cultivated – comic books, role-playing games, TV – and what a struggle it was for his parents and teachers to steer him toward “enlightenment” (of the non-Buddhist sort) and “awakening” – meaning an awakening to the truth about racial prejudice in this country in both the present (i.e. in the ‘80’s and ‘90’s) and in the past. It’s no accident that both of these words also appear in the writing of Transcendentalists like Emerson and Thoreau – Coates’ father is in a way a 20th-century Transcendentalist, embodying both Transcendentalist ideals and also the contradictions at the core of the flawed thinkers of 19th-century Concord.

This memoir begins with the incident – a very close call during a confrontation between rival gangs – that prompted Coates’ older brother to begin carrying a gun at all times. It proceeds through Coates’ middle and high school years, through his endless attempts to check out even as his father insisted that he wake up, through the teachers that reached and did not reach him, through his first encounter with gifted classes (“All our homework was weird and open-ended” [96]), through the complicated role of violence in his family: “And then he was swinging away, channeling a chi ancient as Equiano. The power was passed down from mothers guarding their sons from the lash, and later from the pyre, rope, and fat sheriff. My father swung with the power of an army of slaves in revolt. He swung like he was afraid, like the world was closing in and cornering him, like he was trying to save my life. I was upstairs crying myself to sleep when they held a brief conference. The conference consisted of only one sentence that mattered – Cheryl, who would you rather do this: me or the police?” (141).

I mentioned in my review of Between the World and Me that I was uncomfortable with how many words and phrases I needed to Google when I was reading it. I had a similar experience reading this memoir, but this time I resisted the urge to go right to my search engine. The expressions I didn’t know didn’t stop me from understanding the book as a whole, and in some ways to resist the desire for answers is one way to show respect for a book when you can only partly understand its author’s language. There is something healthy in letting that kind of confusion continue. Also, while in Between the World and Me the language I didn’t understand was mostly African-American slang, I found in this novel that I was equally confused by some of the other cultural differences between Coates and me. Take this passage, for example, which I think is about Dungeons and Dragons or some similar role-playing game, though really your guess is as good as mine: “What did I know of white kids gone demonic, Patricia Pulling, and steam tunnels? Fuck the dumb dichotomies and what people think this means. Even then, I was dreaming of Raistlin’s black robes one moment, and Dorsett’s spin move the next. This is what my father deeded – that our Knowledge of Self be more than America, that we understand the brain death that sprawled from the projects to the subdivisions. Consciousness was a beginning, but the imagine that could turn straight 18’s into paladins in plate, could make warrens in tunnels from graph paper, could pull armies of gnolls from miniatures – this was the Knowledge that ultimately would find a way out” (93).

Coates is willing to be unflinching in relating both the events and the epiphanies of his difficult adolescence; as a result, this book is fascinating and complex. And because he has a virtuosic ear for language, this book is profound, sad, and sometimes aphoristic. For any readers who might be planning an American literature curriculum at the high school level: this memoir would make a fabulous text at that level, paired with other works of African-American literature or even – my preference – with the Transcendentalists. Forget Into the Wild, which I taught for years: Chris McCandless and his silly bus. This is the book to read alongside Walden and, perhaps even more aptly, alongside Walt Whitman, whose lines echo in Coates’ marvelous internally-rhymed sentences like “She would stop by and find Dad in the back with brother Howard tackling a pint of Jack” (88) and “I was young and could not see the weaponry my ancestors had left for me, the shield in the tall brown grass, the ax lying right next to the tree” (41).

I could go on. Read it, folks.