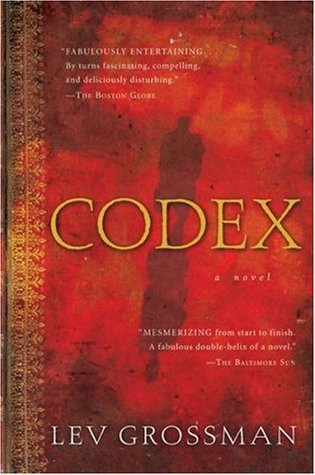 I was just on goodreads.com organizing my books, and I was looking at Codex and trying to figure out what shelves it belongs on. I feel like I need to create a shelf for mysteries concerning encoded illuminated manuscripts. Dan Brown’s Robert Langdon books belong in this genre too. And the more I think about Codex, the more I feel like Lev Grossman may have been trying to write Robert Langdon fanfiction when he wrote it. Yeah, okay, that’s sort of mean. But it was funny. And also a little bit true.

Our hero in Codex is a twenty-five year old investment banker named Edward Wozny. He is an up and coming rising star at his firm, and has recently been transferred to the London Office, from the New York Office. I think that’s considered a promotion. Edward has just begun a two-week vacation from work, his first since he graduated from Yale four years earlier. During this time he is supposed to be packing up his apartment, moving to London, finding an apartment in London, and he hasn’t even scheduled a flight to England yet! Managing all this in two weeks seems very ambitious to me. And the other weird thing that Edward is supposed to be doing in fourteen days is a quick side project for some really rich, important clients of his firm (who happen to be a Duke and Duchess). And that project? Cataloging and organizing their library that was shipped from the estate back in England sometime either right before or during World War II, and got sort of forgotten about. Why Edward, you ask? Well, we never do find out why. And neither does Edward. But something about the collection of antique books (and books that are so old they aren’t even books, they’re manuscripts and pamphlets) speaks to Edward, as does the side project that the Duchess has in mind for Edward: finding in the crates of books a lost manuscript by Gervase of Langford called A Viage to the Contree of the Cimmerians. Shortly after starting on this project, Edward is told that the Duke wants him to cease and desist the entire project. Edward becomes obsessed with this manuscript, and decides he is going to keep looking for it, despite being told not to.

The other thing that Edward decides to get obsessed with at the worst possible time is a video game called MOMUS, an open source project. The gaming technology involved in this seems more than a little dated (granted, this book was published in 2004), but Edward gets the game on a CD from a friend, he carries his game around on a portable drive around his neck (don’t saved games just live in the cloud now?), and Edward has to buy a $5000 laptop to run it efficiently. Do $5000 laptops even exist any more? Anyway, that’s a complaint that I don’t even know is valid at this point. The computer tech described just seems dated to me. I may be completely off base, because I don’t know much about laptops besides how I can use them to type blog posts, cruise the internet, check my email, and look at my pictures.

The thing that fascinates me about Edward is that he’s this professed type A banker who finds himself at loose ends for two weeks, and turns into a gamer as well as becomes wrapped up in an ages-old literary mystery. It’s just such a personality change and I don’t know that I’ve ever known anyone to have such a one hundred eighty degree alteration in attitude so quickly before, in real life or in fiction, unless there was a stroke, or head trauma, or if the character was a spy or having a complete mental breakdown.

Edward goes on a search at a rare book repository in Manhattan, and there he meets Margaret, a graduate student doing her dissertation on Gervase of Langford. She provides exceedingly important exposition about the book the duke and duchess are after, and its author, and the controversy surrounding whether or not the book exists, and whether or not Gervase actually wrote it. This mystery aspect was my favorite part of Codex, and it’s unfortunate that there was so much else going on that this plot got overshadowed sometimes.

I’m going to do something here that I don’t think I’ve never done before on PfP: I’m going to purposefully stop right now, and finish this review on Saturday. I only have one day off this week (because I took a few days off at the beginning of the week to go to Yosemite), and I don’t think I’ll be able to read enough of anything tomorrow to get enough material together for a post on Saturday. So I’m putting a pin in my Codex review for now, and I’ll get back to you about it. I’m also hoping by then to have reread the last two chapters (for the third time) of the book, so I can be sure that I understand what happened. I don’t love that the ending was so confusing to me last night.

6 Responses to Review of Lev Grossman’s Codex, part 1 (by Jill)