Thoughts on Paulo Coehlo’s The Alchemist 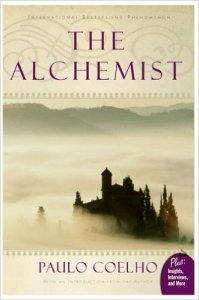 It’s possible that I was the last English teacher on earth who hadn’t read The Alchemist. When did this book become so omnipresent on 9th grade reading lists? Many students list it as a favorite, and it’s not surprising that its be-yourselfy message appeals to the millennial and post-millennial set. To me it felt like a 167-page graduation card. It’s sort of Franny and Zooey meets The Little Prince meets Star Wars if Star Wars were just about Luke and Obi-Wan and Yoda and no one else.

Like The Little Prince, which the reviewers on the book’s back cover invoke more than once, this book is set in the north African desert and is about lots of vague mystical things. I love The Little Prince, which may be because I encountered it in my early teens, which is just the right age to encounter books like these. The Alchemist is about a shepherd named Santiago who goes to see a Gypsy who knows how to interpret dreams. The Gypsy tells the shepherd to sell his sheep and go to Egypt. While Santiago is still deciding whether to go, he reads a book and is surprised when an old man approaches and begins to talk about the book Santiago is reading. This book “‘says the same thing almost all the other books in the world say,’” says the old man. “‘It describes people’s inability to choose their own Personal Legends. And it ends up saying that everyone believes the world’s greatest lie.’

“‘It’s this: that at a certain point in our lives, we lose control of what is happening to us, and our lives become controlled by fate. That’s the world’s greatest lie.’” (18)

Of course this is compelling. It’s compelling to ninth graders, and as I make my last few gasps in my sprint toward my 41st birthday, I’m not immune to its appeal either. The thing is, I feel the appeal, but I also feel compelled to mock it. I put the book down. I googled “Alchemist parody.” Is it possible this book has never been parodied? And if not, excuse me while I cancel all my plans and write a parody of it myself. But first I have to write all the other things I canceled plans in order to write.

This is the essence of my response to The Alchemist. I desperately want to mock it – but I am also compelled by it and wish the world were full of forces that were sitting there waiting to pull us to our best possible lives if only we were receptive and spiritual enough to gain access to them. What an alluring idea. But if all of us sell our sheep and go to Egypt in search of our Personal Legend (the capital letters are the best part), who’s going to stay put and work in the DMV? Who’s going to work in the grocery store and say, “Is that a chip card? Then you need to insert it” over and over and over again? Yes, of course I know that in an elevated, more spiritual world maybe we would no longer need to have a DMV, or someone would be born whose Personal Legend is to work in the DMV and who is absolutely delighted to be there serving you – though this then conjures up images out of a different novel common on high school reading lists: “Alphas and Betas have to work so hard, and Deltas and Epsilons are frightfully stupid. I’m glad I’m a Gamma.”

So Santiago sells his sheep and goes to North Africa, where he works for a crystal merchant for a while and learns cliché insights about life while doing so, and at some point he becomes obsessed with meeting someone called “the Alchemist.” He ends up in an oasis in the desert among people who remind me of the Prophet Muhammad’s extended family as described in a book I read earlier this year (excuse me, LAST year) – and since this book stubbornly refuses to reveal when in history it is set, this comparison might not be far off the mark. He meets an idealized female (all fake parables need one of those) named Fatima (see what I mean about the Muhammad thing?), and then the alchemist says some mumbo-jumbo things about her: “She knows that men have to go away in order to return. And she already has her treasure: it’s you. Now she expects that you will find what it is you’re looking for” (118), which is a little sexist, isn’t it – sort of like “he for God, she for the God in him” from Paradise Lost? And the alchemist tells Santiago that if he stays in the oasis and marries Fatima he’ll never be happy, because his soul will always want to go in search of its Personal Legend, which sounds more or less like the entire narrative of my life and excuse me for a minute while I drown my tears in some baby carrots.

And then Fatima says some Game of Thrones-ish things like “One is loved because one is loved. No reason is needed for the loving” (122), which apparently is how idealized females from the desert talk. Then Coehlo writes some sentences that more or less say “What makes the desert beautiful is that somewhere it hides a well,” which is from The Little Prince and is way more profound than anything in this book. And the alchemist tells Santiago that “before a dream is realized, the Soul of the World tests everything that was learned along the way… That’s the point at which most people give up. It’s the point at which, as we say in the language of the desert, one dies of thirst just when the palm trees have appeared on the horizon” (132), which is the sort of thing my Taekwondo teacher used to say when he wanted to scare people shitless about their black belt tests.

This book is a synthesis of pop spirituality. It draws on Christianity and Islam, hence the Muhammad vibe. Melchizedek and the Urim and Thummim make confusing cameo appearances. Every thirty pages or so someone says some bit of pseudo-wisdom like “The secret of happiness is to see all the marvels of the world, and never to forget the drops of oil on the spoon” (32). And we eat it up, we 21st-century American seekers, who have no idea what we’re looking for but are pretty sure we’ll find it somewhere on the internet, if we could just figure out where to look. And there are plenty of moments that tempt one to write “these are not the droids you’re looking for” in the margins, so I did so, feeling all intellectual and superior, even though if I could make my eyes all focused and intense and speak these words to some hooded desert security guard and cause him to become dazed and wave me through, I would be as pleased with myself as you would.

2 Responses to Thoughts on Paulo Coehlo’s The Alchemist