A Review of Jonathan Franzen’s Purity (by Bethany) 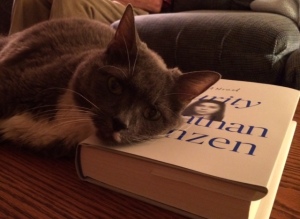 This novel is organized into seven long titled chapters. While it’s been years since I’ve thumbed through The Corrections and Freedom, I think this approach is standard for Franzen. I turned the pages of this novel readily from start to finish, yet I had trouble answering a few basic questions as I read – questions like “Who is the protagonist?” and “HIM? Why does HE get to speak in first person when the others don’t?” and so forth.

I’ll start with the first question. The “Purity” of the title is the given name of Pip Tyler, who is a likely candidate for the role of protagonist. The first chapter is called “Purity in Oakland” (Bay Area residents will recognize this as a bit of an oxymoron) and chronicles Pip’s frustrations as she deals with her crazy mother, her dead-end job, and the machinations of her housemates. The novel opens on a phone call between Pip and her mother, who complains that “[her] life is nothing but one long process of bodily betrayal” (3). This motif – of the soul raging inside the dying animal – is an ongoing one throughout the novel. Pip uses the term “moral hazard” to describe her relationship with her mother and identifies herself as “a bank too big in her mother’s economy to fail” (3). We are treated to an excruciating telephone exchange between mother and daughter, at the end of which we understand why Pip lives in Oakland in a house full of crazy squatters.

Pip’s living situation sounds horrible to me, but she seems to find a sense of comforting community with Dreyfuss, the middle-aged schizophrenic who once owned the house in which he, Pip, and others are now squatting; mentally handicapped Ramon; and married couple Stephen and Marie. It helps (and then doesn’t help) that Pip is in love with Stephen, I suppose, and when Marie decides to leave Stephen Pip takes the opportunity to get naked and beg him to sleep with her. She is humiliated, of course, so when a houseguest of Stephen’s named Annagret asks Pip to fill out a questionnaire to see if she is qualified for an internship with something called the Sunshine Project (more on that later), Pip agrees to answer the questions and, when she is offered the internship, she accepts it and moves to Bolivia.

Chapter Two, called “The Republic of Bad Taste,” brings us back in time to the late days of the East German Republic, where a character named Andreas Wolf is living in a church basement. We know from Chapter One that Andreas is the director of the Sunshine Project, but in Chapter Two Andreas is just a young man, estranged from his parents and working as a “youth counselor,” a job that involves lots of sex with teenaged girls. One of these girls is Annagret, of Chapter One fame. Andreas’ feelings toward Annagret far surpass his feelings toward the other emotionally-scarred nymphets under his care, so when she confesses to him that her stepfather – a prominent Stasi officer – rapes her, Andreas sets out to murder the stepfather. In Andreas’ mind, he and Annagret are carrying the murder out together, but really the planning, implementation, and cover-up of the killing are Andreas’ own doing. They agree that they shouldn’t see each other for a year, and during that year Andreas hopes to move the body from its temporary grave on the grounds of his own estranged parents’ vacation home. When Annagret moves to another city to live with her sister, though, she hopes never to see Andreas again.

Long story short, Communism falls and the Berlin Wall comes down. Through a series of lucky coincidences, Andreas ends up in the right place at the right time on two occasions – first, when he participates in a mob that raids the Stasi archives and manages to get his own case files, and second, when he leaves the archives and walks directly into the path of a Western newscaster, who interviews him and labels him as a “prominent East German dissident,” broadcasting his story worldwide. This is the beginning of Andreas’ career as media darling, internationally-excoriated leaker of classified documents, and fascinating sociopath, which is the status he has attained by the time Pip exchanges flirty emails with him in Chapter One.

Chapter Two ends like this: “His plastic shopping bag was visible in thousands of frames of video that day. It was firmly under his arm when, late in the afternoon, he ran home to the basement of the church. He was almost free. His only worry now was the unsecurely buried body, he was very close to having Annagret, his libido was back. He didn’t even glance at the files in the bag, just shoved them under his mattress and ran outside again. In a state of sex-mad lightness, he crossed the old border at Friedrichstrasse and made his way to the Kurfürstendamm, where he met the good American Tom Aberant” (168). At this point, we don’t know anything about Tom Aberant, nor do we know whether he really as aberrant as his name suggests (he’s not; he’s probably the least aberrant character in the novel); all we can do is file his name away until he appears again – which of course he does.

I can never keep track of all these new terms for plot devices – Easter eggs, dog whistles and such – and I don’t think any of them directly describe exactly what Franzen is doing here, but in this novel he consistently moves his plot forward via these little hints – names and details dropped that echo elsewhere in the novel. It’s a form of foreshadowing, of course, but as the novel progresses the hints also point backward in the text as well as forwards. To me, the structure of this novel is shaped like the face of a clock, if we imagine a clock with seven numerals instead of twelve. We can follow the numerals clockwise around the clock face in the usual way (and yes, the novel does begin more or less where it started, with some variations), but the hands can also serve as “shortcuts” to point out connections between the characters and events in each chapter. The presence of Tom Aberant’s name in Chapter Two, for example, provides a link into Chapter Four, in which we learn portions of the story in the first person from Tom’s point of view.

The links between various chapters in this novel don’t always take the form of the characters themselves. Certain character types recur as the novel progresses. For example, desperate characters of both sexes beg one another for affection, and domineering, poisonous mother-child relationships recur too in a feedback loop that’s as unpleasant as it sounds. Well before this book was released, I read many reviews that focused in on how misogynistic this novel is – and in some ways these reviews were right. Women are an emasculating, soul-sucking force in this novel. They’re Dementors, witches, succubi. There are certainly women like this in the world, and Pip’s mother – the worst of the bunch – reminds me a lot of a certain voice in my own head that I manage to keep silent most of the time but that is a real presence in my life nevertheless, and is no fun. I have trouble concluding that Franzen is a misogynist himself just because he’s assembled such a cavalcade of bitchery here – I like to avoid assuming that every character has to be a mouthpiece of its author. But those of you who are reading this and thinking “if it quacks like a duck…” have a point too.

And then there are the references to Great Expectations. According to her mother, Pip chose her nickname for herself shortly after her first day of answering to “Purity” in kindergarten. Franzen makes clear, though, that he intends his novel to wink occasionally in the direction of Dickens’ classic. Pip’s mother, though less violent, is as irrational as Mrs. Joe, for example, and it does turn out late in the novel that Pip has not only a benefactor but also a wounded, tragic figure like Miss Havisham who masquerades as a benefactor while at the same time manipulating the most private elements of Pip’s life as a way of exacting revenge not on Pip personally but on others. Though its circular plot is unconventional, in many ways this novel is very 19th century in structure, with mistaken identities and cryptic letters (OK, emails) and a major plot strand involving Pip’s quest to learn the identity of her father.

I found this novel compelling and recommend it highly, though I have trouble putting a finger on what exactly this novel has contributed to the literary world. I can imagine having the impetus to write a novel similar to this one – but I would have stayed away from the circular structure, which reflects the frustrating fact that most people don’t change but leaves me unsure about Franzen’s worldview. The characters in this novel are entrenched in a swamp of bullshit and mostly remain stuck there as the novel ends, though Andreas finds escape in suicide and Pip finds a way out of her financial difficulties, though her maternal difficulties will likely plague her for a long, long time.