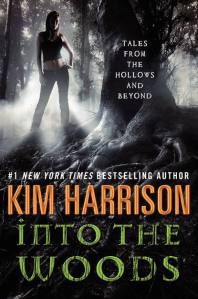 Yes, my friends, this will be my last post on Kim Harrison’s wonderful short story collection, Into the Woods.  I’m sad that it’s over but relieved to be moving on to something else.  I took a long time to finish this book, longer than I expected to take.  Usually I plow through Kim Harrison books in a week or less, depending on if I’ve got a long weekend.  This one took me two whole weeks.  Granted, it’s long, at over five hundred pages, and my work schedule has been pretty brutal since I started reading this book.  But whatever.  The last five stories in the collection were great.  The first one I’ll talk about is the last of the ones about The Hollows and all the usual suspects.  The other four are independent of The Hollows, and of each other.  It was nice to see that Harrison is more than a one-trick pony, and I’m hopeful that whatever comes after The Hollows will involve one or more of the worlds she created in these stories.

The last story in the section titled “The Hollows” is called “Million Dollar Baby,” and chronicles Jenks and Trent Kalamack’s adventure in Seattle following the events of Pale Demon.  This tale is alluded to in either Pale Demon or A Perfect Blood, but we never do find out the details of how Jenks and Trent got Trent’s daughter Lucy away from his ex-fiancée, Ellasbeth Withon, and her family.  This is what this story is all about.  It was one of my favorites in the entire collection.  Very action-packed, and since it was told in third person limited to Trent’s point of view, we get some important information about him.  Remember how I told you guys that everything he does he does to save the elves?  Well, he’s done some pretty terrible things, and he actually wishes he hadn’t done all of them.  He fears he is turning into his father, who was a very talented but ruthless man.  He fears his daughter will never love him if he continues on the same path he has been on.  He wants to be a better man.  And Jenks is an amazing backup for Trent here, which is no surprise.

The first story in the “Beyond The Hollows” section is called “Pet Shop Boys,” though there was only one boy working in the pet shop that I noticed.  Our protagonist is Cooper, a broke graduate student working part time at a pet shop.  He meets a very attractive red-headed woman named Felicity, and her daughter Emily when they come into the shop and buy a kitten.  Felicity invites Cooper to her company Christmas party at a very exclusive nightclub called Gateways.  Cooper decides to go, though he has misgivings.  Once he arrives, he realizes that his misgivings were well founded.  Felicity, her “co-workers,” and Emily are sort of hybridized vampire-fey people.  They drink blood and their hair changes from red to black and their eyes change from green to brown when they are satiated. (Please, Kim, tell me you came up with this long before Stephenie Meyer wrote Twilight!)  But they also can only cross the veil once a year on the winter solstice.  I think.  Or maybe they can only bring people over once a year?  These details aren’t worked out.  Anyway, Cooper elects to not go with Felicity and Emily and their carnivorous relations, though the difference with him is that Felicity truly wanted a partner to help raise her children, and she wanted him to go freely through the veil, as opposed to the other fools invited to the party, who eat fairy food, pass out, get fed on, then carried over to whatever dimension these folks come from.  Cooper’s boss, Kay, saves him, though she is more than she seems as well.  I’d really, really like to see more of this world.  I liked Cooper and think that a fairy-vampire hybrid species would be cool to read about.  Harrison mentions in the blurb that she wrote this story initially to go in an anthology and ended up shelving it because her agent thought it could turn into a series.  Here’s hoping!

Next up is “Temson Estates.”  This one was probably my least favorite, though it was still interesting.  I’m not sure what Harrison’s deal is with dryads, but this is the second of three stories that feature them, though the dryads here are very different from the dryad in “Ley Line Drifter.”  Here they are tree spirits, innocent and vague.  Will Temson inherits the woods surrounding his grandfather’s estate in (I assume) England.  He is American, and has never even seen these woods.  Though he has a background in forestry he wishes to sell the woods and have it logged—not clear-cut, but thinned.  His grandfather’s sister and her assistant are very opposed to this, and insist that he see the woods prior to selling it off.  He goes, meets the dryads, and changes his mind.  That is basically all.  Will doesn’t interest me much in this story, but the elder generations of the Temson family do.  Apparently there was a fair amount of “interbreeding” with the dryads, and Will himself is one-third dryad, thus explaining his love of trees.  This is all very sketchy to me, but it could make for interesting reading.

And then there is “Spider Silk.”  This is the third story with a dryad character.  This one, Penn, is much more similar to the dryad Sylvan in “Ley Line Drifter.”  Penn is pretty evil, and possibly a family delusion.  Lilly is a single mother raising two girls named Meg and Em in a small town and living with her mom, Emily, a widow, on the old family homestead.  Penn is a dryad who tormented Emily when she was young, but who has been gone for years.  Apparently Emily trapped him in a tree, but the tree has since died, and now he’s free to play his mind games with another generation of this family’s women.  But is this a true evil tree spirit or are all the women in this family crazy?  Since it’s Kim Harrison, I will assume for the sake of argument that the dryad is real and the women aren’t crazy.  This story reads more like the first few chapters in a novel than a freestanding story.  There are too many things not explained.  Like, what happened to Emily when she was fourteen?  Two versions of that story are presented to us, and I don’t quite believe either one.  What exactly is Penn?  What’s with the title?  There are several mentions of the characters wiping spider webs off of their faces, but otherwise nothing.  Or maybe the spider silk of the title is a reference to the ephemeral nature of Penn, who can come and go like the wind, like a ghost.  He’s there’s and then he’s gone, just like spider webs.

The last story in the collection is called “Grace.”  This one also reads like a treatment for a novel/series, which is fine with me, because I think I liked this one the best of the “Beyond The Hollows” stories, though “Pet Shop Boys” is a close second.  In this story’s world, something has happened to the earth’s electromagnetic field, and called “throws,” who can manipulate electricity, have emerged.  It seems almost like telekinesis, but different.  Grace is the protagonist, and she is a throw, working for The Strand, the agency that locates throws, evaluates them, and decides if they can handle their abilities.  If they can, they are trained and given a job within The Strand.  If not, they have their abilities removed, via a procedure called “burning.”  They say it’s harmless.  I’m not convinced I believe them.  Grace and her partner, Boyd, and her dog, Hoc, go on a run to pick up a seventeen-year-old throw named Zach.  Usually throws are identified and evaluated long before they get to this age.  It is not discussed how Zach stayed hidden for so long.  Zach doesn’t particularly want to be evaluated, and fights back.  And Zach fights dirty.  Dirty enough that Grace doesn’t think he should be allowed to keep his powers because he would be very likely to use them for immoral purposes.  There’s a romantic subplot, and Grace ends the story by being promoted into the elite division of The Strand because of her excellent work with Zach.  And that’s where the story ends.  It seems more like the end of a prologue to me.  Grace’s moral compass points true north, but she seems to be the only one in the story for whom that is the case.  I wonder what is going to happen to her and Hoc.  He is a very cool police doggie.  I hope this is the world that Harrison picks up when she has to move away from The Hollows.  I want to learn more about this reversed-pole world.

So that’s the end of my series of posts about Into the Woods.  I’m actually sort of glad I ended up doing several different posts about this book so I could talk about every story without writing one monster post.  I hope you guys liked it too.  If we keep going with this post-a-day business (spoiler alert: we are doing it in March, too!) I suspect there will be more short story collections in my near future.

This entry was posted in Kim Harrison. Bookmark the permalink.