A Review of Avi’s The Button War 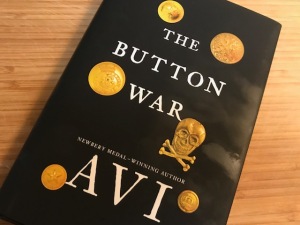 Summer is here and I’m reading like a maniac. At least half of the books I’ve read this month are for kids, since I just finished my first year teaching elementary and middle school (after ten years at the high school level) and still feel very behind the game in children’s literature published since 1990 or so, and I believe I’m about to do something I’ve never done once in the six years since Jill and I have been blogging: I am going to write a review of a children’s book that is 100% positive.

I hold children’s books to the same standards I hold books meant for adults. I expect them to show rather than tell, to feature well-rounded characters, to avoid weirdness for the sake of weirdness, and to avoid being didactic and moralistic. I expect their plots to emerge subtly from character and conflict and be guided but not overpowered by narrative voice. Before I started blogging, I didn’t realize what a tough customer this made me in the world of children’s books. But slowly I’ve discovered that children’s books that meet these standards are out there, and Avi’s The Button War is one of them.

This novel is set in a tiny village in Poland in the early months of World War I. The protagonist and first-person narrator is a twelve year-old boy named Patryk, and he’s part of a group of seven friends that are “nothing like a club, or a gang – more like a flock of wild goats” (2). Patryk’s community is so isolated that he doesn’t even know where the roads that leave his village go. He has been told that if you travel along one of them for a very long time, you will reach a city – but this fact holds the quality of myth. He doesn’t seem to know anyone who has visited that city or contemplate visiting it someday himself. The boys don’t even entirely agree that their village is located in Poland. Of his six friends, the one who occupies the most space in Patryk’s mental and emotional landscape is Jurek. Jurek is an orphan who lives with his older sister, who often kicks him out of the house when he misbehaves. For that reason, Jurek is semi-feral. He spends a lot of time in the woods hanging out at some ruins. We don’t know what kinds of structures these ruins used to be, but they are clearly a sign of some kind of past violence and – it soon becomes clear – a harbinger of violence to come. Jurek insists that these ruins are “his” because he is a descendant of “King Boleslaw,” whose palace Jurek believes the ruins to be. Patryk knows this story to be untrue, but he also resents it. It’s as if he knows that Jurek is a pathetic unloved kid who salvages his pride by claiming to be the descendant of a king but at the same time can’t help resenting Jurek for the little bit of pride this delusion allows him. Based on both my memory of being a kid and on my experience with kids as a teacher, this seems plausible to me. Kids have little patience with other people’s emotional defense mechanisms.

One of Patryk’s few connections with the outside world is the presence in his village of Russian soldiers. The boys accept the soldiers as part of their landscape and don’t seem to give them much thought – though Patryk notes that some of the adults in town “don’t like Russians.” One day, when the boys are hanging out near the ruins, Patryk finds a button on the ground that fell off of a Russian military uniform. Jurek insists that the button is his property because the ruins are his; Patryk will have none of it, and they both get their hackles up about this button and everyone goes home angry. Then one day, out of nowhere, the Germans bomb the local school. Patryk sees it happen. He has never seen or even heard of an airplane before, nor does he entirely know who Germans are or that a world war has begun – so this incident is enormously shocking. Not only that, but the village teacher is killed in the bombing, as is one of the boys’ classmates. In the aftermath, Jurek explores the rubble and finds the cane that the teacher used to beat the boys and declares that whichever of his friends can find the “best” military button will win the cane as a prize.

All of the boys – but especially Patryk, who is determined never to be one-upped by Jurek – get really invested in the button contest. And by invested, I mean that things get out of hand and some of them die. I won’t go into details, because this book is truly riveting and I do think readers deserve not to know too much about where things go – but the stakes are high, the button war is simply one theatre in a larger and entirely real war, and the boys are not spared. What makes this novel so heartbreaking is the fact that even once some of his friends have been killed, Patryk can’t force himself to stop caring about defeating Jurek in the button contest. He knows he should stop and has long talks with himself about how he must stop hunting for buttons, but he can’t do it. His rivalry with Jurek always wins out. One of the reviewers on the book jacket compares this novel to Lord of the Flies, and the comparison is apt. Both novels are equally compelling, though this one is for a somewhat younger audience (I will be reading it with my sixth graders this fall, and they will love it). However, it reminded me more of A Separate Peace, in which Gene remains constantly focused on his rivalry with Phineas and on what he thinks Phineas is thinking and feeling, unable to get out of his own head even as the war encroaches closer and closer to his once-safe world.

I recommend this novel to middle schoolers – especially to those dreaded “reluctant readers,” and, of course, especially to boys – though I enjoyed it in and of itself and recommend it to teenagers and adults too. If you plan to read it, clear your schedule. You won’t want to do much else until you’re through.