Concluding thoughts on Diana Gabaldon’s Drums of Autumn (by Jill) 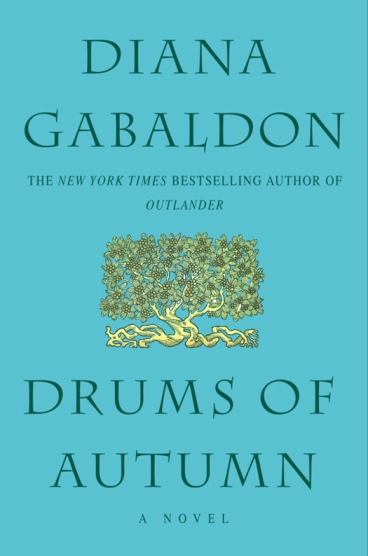 The last few hundred pages of Drums of Autumn definitely went much more quickly than the first few hundred, which was a good thing.  But the plot point that made the action pick up was possibly the worst kind of mistaken identity shenanigans I’ve ever experienced in a novel.  I just can’t believe the series of coincidences and nonsense that Diana Gabaldon put together, and how pig-headed Jamie, Bree, and young Ian were.  I know that’s supposed to be a Fraser family trait, but Gabaldon took it too far in this instance; it could have been the plot of a slapstick comedy if it were played correctly.  I actually wonder how they’ll play the fight between Jamie, Roger, and Ian on the show next season….  Anyway, the review that follows is riddled with spoilers, so beware.*

First, Bree and Roger travel through the stones at different pagan holy days: Bree goes at Beltane 1971 and Roger goes at Midsummer 1971.  (A brief aside in my complaining: Bree got to Lallybroch and meets Jenny and Ian and her cousins; I always love getting to spend time with Jenny.  She is one of my favorite minor characters in the Outlander series, and getting to see Bree meet her father’s side of the family is lovely, and an example of the level of story-telling that Gabaldon is capable of.)  They arrive in Scotland in 1769 and both make their way to North Carolina, spurred on by the knowledge that Jamie and Claire are set to die in a fire at Fraser’s Ridge in 1776 that they both acquire separately, but do not tell the other about.  Roger doesn’t tell Bree because he knows she will try to go to the past to save them, and Bree doesn’t tell Roger because she knows he will try to stop her.  They finally reunite and are hand fasted and consummate their marriage in a shed or a barn or somewhere, during which time here is far too much discussion of Bree’s glorious female attributes.  After they finally come up for air early the next morning they learn what brought the other through the stones.  Bree is enraged that Roger didn’t tell her about the fire, and they part in anger, never exchanging pertinent details, like what names they are going by in the past. Roger, for some reason, decided to start going by MacKenzie (his birth name) rather than Wakefield (his adopted father’s name, which he has gone by in the present day) when he arrived in the eighteenth century.  In the meantime, Brianna and Claire are reunited, and Brianna and Jamie finally meet.  These reunion scenes are also lovely.  But wait, there’s more.  Bree’s maid, Lizzie, realizes that Bree and Roger (whose name she heard was MacKenzie when she overhears him talking in a pub prior to meeting with Bree) have had sex when she does Bree’s washing, and she assumes it was against Bree’s wishes when she sees how upset her mistress is when she arrives back at their room after her blow up with Roger.  When she learns that MacKenzie is looking for Bree and is on the Ridge, she tells Jamie and Ian, and they beat the crap out of Roger and sell him to the Iroquois.  Bree eventually draws a very realistic likeness of Roger, in hopes of finding him more easily, when he continues to fail to show up as promised.  Jamie and Ian realize their error, and tell Claire and Bree, sending Bree into a Scottish rage, resulting in Jamie calling her a harlot or a whore or something like that.  Oh, did I not mention that Bree is pregnant, and that it may not be Roger’s baby?  Because she gets raped by Stephen Bonnet (yes, he’s still around) the day after she has sex with Roger when she goes to try to retrieve her mother’s wedding band (from her first wedding to Frank Randall).  Don’t ask me how Bree learns that Stephen Bonnet has it.  I don’t remember and I don’t really care.  By the time all the secrets are out, Bree is at least 5 months pregnant, and not fit for a winter gallop through the forest trying to find her husband/fiancé/possible baby daddy.  So Claire and Jamie go, along with Ian.  Eventually Roger is found and rescued, though the price they pay is Ian staying behind with the Mohawk and becoming one of the tribe.

So many pages to fix a mistake that could have been dealt with so quickly if Roger had just told Jamie and Ian his adopted name, or told Bree what name he was going by.  Or if there were social media or cell phones or something.  That being said, Drums of Autumn came out in 1997.  There was barely internet back then, much less social media.

I know that was a terrible rant, and really, it’s all in fun, and annoyance, with characters who I have spent a fair amount of time with at this point, and who I consider fictional family members.  I enjoyed this entry in the Outlander series enough to be considering starting book five, The Fiery Cross, as my next book, but not enough to have already started it.  I did pick it up.  And it’s over 1400 pages.  I’d like to finish at least one more book before 2017 comes to its end, and I know that I won’t be able to push through that many pages in slightly more than a month, no matter how many exciting adventures Jamie and Claire can manage to have in the 1770’s.  I’ll stick with something easy to close out this year….

*I have no wish to offend the legions of Diana Gabaldon fans out there with this post.  The complaining is very tongue-in-cheek and my irritation stems from my knowledge that she is better than some of the plot devices she uses in Drums of Autumn.