A Review of J.D. Vance’s Hillbilly Elegy: A Memoir of a Family and Culture in Crisis 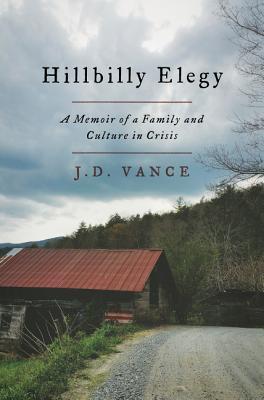 On the one hand, reacting to the Trump victory by immediately reading a bunch of books about poor people is a condescending and despicable thing to do. I feel a little dirty about it, honestly. On the other hand, the performance of J.D. Vance’s Hillbilly Elegy on various bestseller lists suggests that I am not the only one drawn to retroactive study of the forces behind Trump’s recent coup.

(* My reaction to this statement would be different, by the way, if Trump had said, “I support the poorly educated,” “I will fight for the needs of the poorly educated,” or something similar. It was the tone, the pace, and the emphasis he gave to the word “love” that gave me the willies. Also the word “poorly,” which implies a negative judgment but is then canceled out according to some weird Trumpian algebra when he counterbalanced it with the word “love.”)

(** I am skeptical of everything the internet does these days and have no doubt that a person of a different demographic and search history would get different results.)

Hillbilly Elegy is Vance’s memoir of growing up as part of an extended family with roots in Jackson, Kentucky. Like many “hillbillies” – which is not a word I would use on my own, but I’ll use it in this review because Vance seems to identify with it – Vance’s grandparents left Appalachia in the post-World War II years to work for Armco Kawasaki, a steel company in southern Ohio. Vance describes this migration as a resettlement of entire Appalachian families, much like the migration of black families and individuals to Chicago, Detroit, Pittsburgh, and other northern cities during and after Reconstruction, and he indicates that at first AK Steel did a good job of rewarding family members who moved as large, presumptively-stable units and individuals who logged long careers with the company. Over time, though, management of the company changed hands and changes in demographics and other factors caused the company to downsize and move entire divisions out of the area, leaving a vacuum behind in which thousands were left unemployed.

A person would have to live under a rock not to know the bare bones of this story. I think I became aware of the decline of Midwestern industry when I first saw Roger and Me, the film that made Michael Moore’s reputation back in the late 1980’s. This region – especially the auto industry – was decimated by the economic crash, and of course we know, at least in general terms, of all the jobs that have been “shipped overseas to Mexico and China,” which I place in quotation marks because I’m taking the word of various loud people on television. I don’t have my own statistics on this matter, though I wish I did.

This book is extremely well written – I read it over two days, staying up late last night to finish it – and populated with wonderful characters. Vance had to walk a tough line here, boldly sketching out the lines of his hard-living, gun-toting grandparents, eccentric uncles, drug-addicted mother and her parade of underachieving boyfriends. He approaches the realm of cliché, acknowledges it, and then transcends it. He pulls off this feat over and over again, on every page. He balances his feelings of frustration, love, and empathy for his flawed family with an academic approach, citing studies here and there to indicate his understanding of how his own experience fits into the context of the country as a whole. A fiction professor of mine once told our class that what we had to understand about “mountain people” (in our context this meant the people of the Arkansas Ozarks, but it applies in Vance’s memoir too) is that they are both much better and much worse than outsiders believe them to be. I remember embracing this idea and seeing what this understanding could do for me as a fiction writer, though I was also uncomfortable with the word “mountain.” Didn’t this truism apply to all people, regardless of origin? Aren’t we all both angels and beasts?

Early in his memoir, Vance addresses this question tangentially by pointing to the common ethnicity of Appalachian “hillbillies” – who, apparently, are of Scots-Irish descent. “In traveling across America,” Vance quotes a source, “the Scots-Irish have consistently blown my mind as far and away the most persistent and unchanging regional subculture in the country. Their family structures, religion and politics, and social lives all remain unchanged compared to the wholesale abandonment of tradition that’s occurred nearly everywhere else” (3). Vance goes on to explain that while this cultural continuity exists, the ethnic Scots-Irish Americans of Appalachia have made one major demographic shift in the past 30 years that reverberates through today’s politics: they switched their allegiance, en masse, from Democratic to Republican. They seemed to blame the failed steel industry on various social programs that promised them a brighter future – programs embodied by the New Deal and FDR’s Democratic ethos, which they saw as failed and hollow.

Vance reports that his family’s demographic is also the most pessimistic group in the contemporary U.S. – even among individuals that do not suffer financially. Vance recalls the jobs he held as a young man – good jobs that paid decent wages – and the way so many of his co-workers sabotaged their own success through constant absences and other inappropriate behavior on the job, even when their bosses were initially forgiving, and even when they had spouses and children at home who relied on their wages and benefits. Vance agrees that corporations have created some problems by shipping jobs overseas, but his focus is on “what goes on in the lives of real people when the industrial economy goes south. It’s about reacting to bad circumstances in the worst way possible. It’s about a culture that increasingly encourages social decay instead of counteracting it… There is a lack of agency here – a feeling that you have little control over your life and a willingness to blame everyone but yourself” (6).

My only real complaint about this book is that I wish Vance had spent more time on the cultural critique implied in the above statement. I would have happily read more about the cultural continuity among Americans of Scots-Irish descent – even going so far as to investigate the often horrible circumstances under which their ancestors immigrated to the U.S. I admire Vance’s book so much that I am loath to compare it to Outlander, but I couldn’t help thinking of one of the few bright spots in The Fiery Cross – when Diana Gabaldon incorporates into her narrative that Highland Scots immigrants brought along their tradition of setting a large cross on fire as a signal that the clan leader had called a meeting – a tradition that evolved into the cross burning made notorious by the KKK. I would have loved to see Vance delve into this connection in a more scholarly and/or more personal sort of way. However, I do understand why he backed away from this topic. Arguments based on ethnicity are a touchy thing, for one thing, and ultimately this memoir is a story about the very well rounded and richly textured people Vance grew up with. I wouldn’t want to lose one sentence of the story he tells, and while I would enjoy more cultural analysis I suspect that approach might cause some readers to back away – and I do think this is a book that Americans should read – with care, with sympathy, and with an open mind – whether or not they’re game for scholarly analysis.

I haven’t really followed through on my promise to connect Vance’s memoir to the results of our election. Over and over again, Vance recreates the pessimism his family and friends fell constant victim to – the tendency to escape from problems, either physically or via drugs and alcohol, rather than confront them, as well as an apparent need to blame others (e.g. immigrants who steal jobs) for one’s problems. Vance credits his grandparents for the fact that he was able to escape his community’s usual; cycle of failure and blame, and the portrait he paints of them alone makes this memoir worth reading. I’m not finished with my Grand Tour of Poverty Books – next up is George Packer’s The Unwinding: An Inner History of the New America – and I will be back soon to share my thoughts.