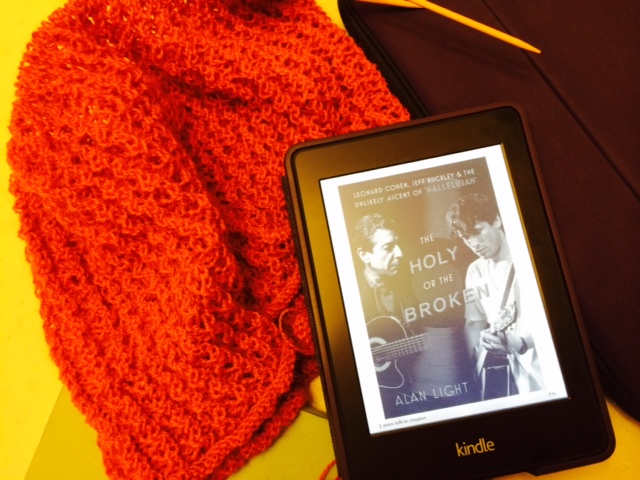 As I’ve mentioned before, I’ve been dividing my time between two cities lately – and this means having two phone chargers, two bottles of each of my prescription medicines, and, of course, two sets of knitting projects. I’m usually in San Jose on Wednesdays, but since this week I’m in San Francisco I thought I would show you my orange cowl, which made appearances on Yarn Along many, many months (years?) ago. I lost track of it for a while but am really enjoying it now. I could cast it off today and be done, but my gut tells me to keep going; I like cowls to be really long and slouchy.

I’m reading a few books, one of which is Alan Light’s The Holy or the Broken: Leonard Cohen, Jeff Buckley, and the Unlikely Ascent of ‘Hallelujah.’ Reading about music is not something I usually do (though I have done it once before, here) but I love the song and I love Leonard Cohen, and I’m enjoying the book so far. It’s not very technical, at least not yet. I’ll let you know more once I finish it.

And no, this Yarn Along photo was not taken on the surface of the sun. It was taken on an off-white tablecloth that for some reason GLOWS NEON YELLOW under the overhead light. The days are getting shorter, and natural light for Yarn Along photos will be harder and harder to come by.

Yarn Along is hosted by Ginny on her blog, Small Things.

This entry was posted in Uncategorized. Bookmark the permalink.

1 Response to Yarn Along