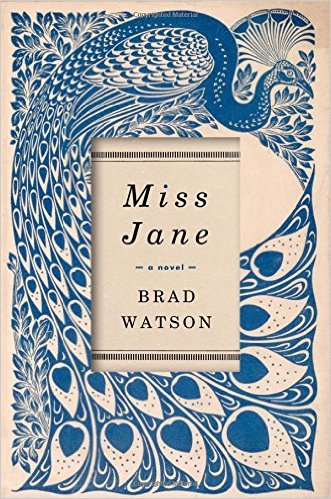 Fair warning: this book is not about Jane Austen. I learned to make this disclaimer when I was reading the book, and everyone who saw the title said, “Oh! Jane Austen!” And then I had the pleasure of replying, “No! Mangled genitalia!”

This novel is about Jane Chisolm, who is born with a vaguely-defined defect of her urinary anatomy. We’re never told exactly what’s wrong, but we know that his first glimpse of his daughter’s genitalia led Mr. Chisolm to say, “Good Lord… what trouble have we gone and brought into this world now?” We also know that her doctor is concerned about fecal contamination of Jane’s vagina and urinary tract and tells her father in vague terms that her various tubes and passageways are “mixed up.” As someone who writes fiction, I see the wisdom of keeping things minimalist in this regard, but as a reader, I was a little annoyed. I wanted to know exactly what was wrong with Jane’s girl parts. What I visualized was a sort of baseball-shaped cavity into which Jane’s rectum, urethra, and vagina all emptied like three underground rivers feeding into an open cave. I am pretty sure this is not accurate, and it bothered me that I kept visualizing this layout throughout the novel.

(Layout. Underground rivers. Baseball-shaped cavity. Various tubes and passageways. Girl parts. Urinary anatomy. Has a more awkward paragraph ever appeared in a book review? I promise I won’t go on like this forever. Actually, never mind – I’m not sure I can promise that.)

A couple more facts about Jane: first, she suffers from both urinary and bowel incontinence throughout her life, and second, her reproductive system is mostly functional, in that she menstruates and has all of the organs necessary to conceive children. Her doctor assumes that she would be unable to carry a baby to term, for reasons involving the possibly-erroneous baseball-shaped cavity, but Jane never tests his theory.

Jane is born in 1915 into a miserably unhappy family. Her father, Sylvester, is a good, well-intentioned man but an unregenerate drunk who pays Jane’s doctor in moonshine. Her deeply unhappy mother blames her husband for Jane’s deformities, viewing Jane’s birth defects as divine retribution for the fact that Sylvester had sex with her when she was on a serious dose of laudanum for her anxiety and grief over the death of her young son. In addition to the son they lost, the family has two adult sons who have left home and are rarely mentioned and a sour daughter in her early teens named Grace. In the incapacitating depression that takes over Mrs. Chisolm after Jane’s birth, Grace essentially raises Jane, passing along her own stoicism and independence. From early childhood, Jane learns to clean her (here we go again) secret passageways and manage her incontinence without help.

Dr. Thompson – the small-town family doctor who delivers Jane – keeps in close touch with the Chisolm family and corresponds with a friend who practices urology at Johns Hopkins, determined to find a way to “fix” Jane. The doctor is a bit of an enigma. His wife leaves him early in the novel, when he refuses to sell his medical practice and move to a city. The doctor is a philosophical type, musing over the crowd of sick, wounded, and disfigured adults that crowd his porch while he is out delivering Jane, “And to think all these came out of the womb fully formed.” The doctor intervenes in non-philosophical ways as well, such as taking Jane to Memphis to be examined by specialists, giving Jane a detailed sex talk when she starts to menstruate, and – wrenchingly – intervening when a local boy seem to be falling in love with her, telling him outright that Jane can’t have children and hinting at the problem with her (this again) safety-deposit box, giving him just enough information to scare him off. Early on, I thought Dr. Thompson was gay and that the friend he consults at Johns Hopkins is a former lover. Their letters contains little glimmers of flirtation and allusions to a memorable past, and it would make sense if an uninterested husband, rather than a host of scary patients, were the real reason for Mrs. Thompson’s departure, but the friendship between the two doctors fades as the novel progresses. The point of this characterization seems to be to establish that the doctor – like most of the other characters in his novel – has his own baseball-shaped chamber to torment him, though in the doctor’s case the emptiness is in his heart.

The novel lingers in Jane’s adolescence but does eventually bring us to middle age. Jane inherits her family’s land and is Dr. Thompson’s beneficiary as well, and when a surgical procedure to fix her (and again!) miswired radio becomes available, she declines the offer to be operated on pro bono. By this point she is comfortable in the solitude and routines of her rural life, and she’s also insulted by the reminder that there are and always have been doctors out there who know about her case and have been striving for decades to “fix” her condition. In the novel’s closing pages, I heard echoes of the ending of The Scarlet Letter, when Hester – who by this point can go anywhere she wants – chooses to come back to Boston, pin on her scarlet letter, and move into the cottage by the sea where she had lived in isolation with her daughter. Both Jane and Hester (and Hester’s daughter Pearl) are set apart from their society. Hester is punished for her “sin,” which any reader with a brain can recognize as no sin at all but an act of pride. Similarly, Jane isolates herself not because of her (not this again) inverted teacup but because of her own sin, which is also pride (look at the cover – peacocks!).

After all this, I suppose I should mention that Brad Watson’s prose is beautiful. “One day in July,” he writes, “she stood beside the tomato row in a mild state of wonder, watching a doomed tomato worm eat her best plant. The worm’s fat, segmented body was studded with the rows of pure white cocoons that had grown from wasp eggs laid under its skin. They looked like embedded teardrop pearls or beautiful tiny onion bulbs growing from its bright green skin. Inside the cocoons, wasp larvae sucked away the worm’s soft tissue as casually as a child drawing malt through a straw. The worm seemed entirely unperturbed. No doubt a tomato work is born expecting this particular method of slow death, a part of the pattern of its making somehow, something its brain or nerve center, whichever it has, is naturally conditioned to recognize and accept. Just as a person hardly registers, until near the end, the long slow decadence of death” (248). Sure, you could argue that agriculture/fertility metaphors are overdone, but to my ear Watson hits exactly the right note here. Jane is tending her private garden – a walled garden, if we’re going to think in medieval cult-of-virginity terms, and of course we are – and the narrative voice here is characterizing Jane and her own slow acceptance (and cultivation) of the limits of her life. We are all limited by our bodies, of course, but Jane learned to accept this reality earlier than most. At the same time, Watson alludes to natural selection, to the slow ways that creatures adapt to their surroundings and pass these adaptations along to their children. Because of her birth defect, Jane is exempted from all of this. Sex drives natural selection forward, and Jane will never have sex or be a mother – and there is a sad, ironic freedom in that.