Yes, Isabel Allende wrote a mystery novel. No, it’s not terrible. Thoughts on Ripper. (by Jill) 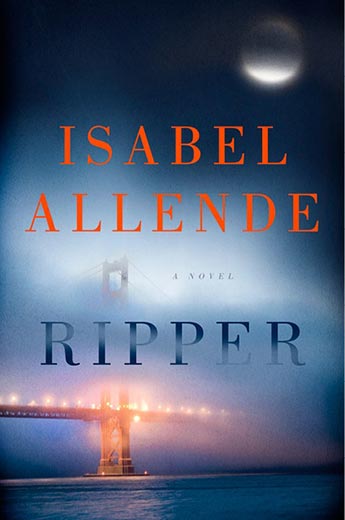 When Ripper came out back in 2014 quick on the heels of Maya’s Notebook I asked myself if Isabel Allende had lost her damn mind. And then I remembered that Maya’s Notebook took quite literally forever to get published in English, so really they weren’t simultaneously written. I was also dubious enough about Ripper that I didn’t bring it to my boss to read—she usually likes Allende’s period stuff but a modern novel and a mystery novel to boot had me somewhat skeptical that Cathy would enjoy this one. I mean, I was skeptical that I would enjoy it, despite the setting in San Francisco and its environs. But in the end, it ended up being a fun book. Not quite typical Allende, but then I figured out that her husband Willie fancies himself a writer of mystery novels. So I think that they might have sort of worked on this one together, which is adorable.

This novel, much like all of Allende’s fiction, revolves around a family, both family by birth and the family we choose. At the center is the Jackson clan, Indiana, her daughter Amanda, and Indiana’s father Blake. Blake and Amanda are the sensible members of the family, and Indiana is the free spirited Reiki healer who in typical Allende heroine fashion is not that attractive but who has about a million men who are in love with her. Indiana’s gentlemen callers form the second circle of family in this novel. First is Bob Martín, Indiana’s first love and Amanda’s father. He is a homicide detective with the SFPD. Alan Keller is Indiana’s boyfriend, if you can count an unemployed heir to one of San Francisco’s largest fortunes who meets her at a fancy hotel once a month for sex but never takes her out to society events a boyfriend. I sort of hated him, if it wasn’t obvious. Ryan Miller is my favorite. He is one of Indiana’s patients, an Iraq war veteran with PTSD and a missing leg as well as a retired war dog named Atilla, he is the best of the bunch, and his love for Indiana is true, even though he has some skeletons in his closet (he does some “private security” work for maybe the CIA). There are additional colorful characters, such as Danny D’Angelo, the waiter at the café in North Beach that Indiana frequents, who would be in love with Indiana if his romantic leanings weren’t for other gentlemen. Celeste Roko is a television psychic, and Amanda’s grandmother. There are also the other denizens of the Holistic Clinic where Indiana practices her healing arts. The supporting characters have as much life in them as is expected of minor characters in Isabel Allende’s novels (that means a lot).

And then there’s the novel’s namesake: Ripper. Ripper is an online game that Amanda plays with her grandfather and several other people who live all across the world. It’s a murder mystery game, and at some point they switch from working on fake murders to investigating real life murders, and for some reason they focus in on a series of murders in San Francisco. They decide that the group of them is the work of a serial murderer long before the police catch on. Handily, Amanda’s father is in charge of investigating these murders, and she is able to get Bob to listen to her and her friends and they eventually catch the guy, but not before he kidnaps Indiana and tries to murder her. That’s hardly the point of Ripper, but it’s one of the points of it.

I really was pleasantly surprised by this novel. I think it was better than Maya’s Notebook, though nowhere near as good as Allende’s period novels, and nowhere near as good as The House of the Spirits, which will be one of the best books I’ve ever read, as well as one of my favorites. I wasn’t really surprised at who the murderer ended up being, because he seemed like a nutball from the very beginning, but the path Allende takes to get us there is a good one with enough twists and turns that I doubted my hunch quite often.

I can’t quite make up my mind how I feel about Allende including her husband’s detective character, Samuel Hamilton, from his novels as a minor supporting character in Ripper. Honestly, I think it’s kind of cute and sweet, but I feel like I should mock it a bit for the sake of mocking adorable things. Because that’s what blogging is all about, isn’t it?

Overall, I do recommend Ripper, for mystery fans and also for serious Allende fans. It is not like her usual work, but it has enough that is true to her unique voice (though very light on the magical realism except for the psychic who predicted a bloodbath in San Francisco right as the serial murders started) that it still seems like one of her books.