Early Thoughts on Umberto Eco’s The Name of the Rose 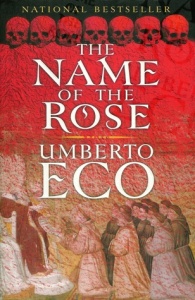 Because I really don’t have enough projects to juggle right now (that’s a joke), I decided to start reading Umberto Eco’s The Name of the Rose. I actually do have a reason for reading it now, but it’s not an interesting reason, so I’ll skip directly to my thoughts on the first fifty pages.

First of all, I can’t imagine a better companion piece to The House of Wisdom. That book paints a dreary picture of Western intellectual life during the Middle Ages, and the characters in Eco’s novel are just beginning their long climb out of the ignorance of that era. The protagonist is Adso (which is also the name of a cat in the Outlander series, by the way), a novice monk who has been assigned to travel to a monastery with a more experienced monk who is investigating some suspicious happenings there. The action has been a little slow in moving forward, but I think time moved slowly in the Middle Ages, so maybe this is just Eco’s verisimilitude.

The first thing I should mention is that this novel occasionally lapses into Latin. Since Eco originally wrote the novel in Italian, these moments may be slightly less jarring to a reader of Eco’s original text than they are to me. I remember a lot of Latin vocabulary and can often figure out the subject matter of a Latin sentence, but I don’t remember the declensions very well, and it’s impossible to translate Latin accurately without a command of the grammar. So I do a lot of guessing.

When I was reading this novel during my BART commute last week, I was bogged down in three pages of description of a stone carving in the entryway of a library. The description just went on and on, and Adso was so emotionally invested in his descriptions of various mythical beasts and demons and lions and so forth that I kept stopping and re-reading the passage to figure out why he was so rapt. It’s a stone carving of a lion, for God’s sake, I wanted to say, just like at the New York Public Library. Chill.

But then I got it. As a medieval monk, Adso believes 100% in the fact that mythical beasts like griffins and manticores and semi-mythical (to him) beasts like lions are the creations of the devil. The carving sent him into hell-fearing overload, and he truly couldn’t look away from the carving and follow Brother William into the library. It makes sense when you consider the medieval mindset. If I truly believed in hellfire and demons and lakes of fire, I would probably have trouble getting anything done in the presence of such a carving as well. The lives of medieval monks would have been so much easier if some of their confreres had found time to lock themselves away in an alchemy lab and invent Xanax.

This may be the single most insipid page ever written about an Umberto Eco novel, and I really do apologize. I will do this novel more justice later. I’m intrigued by it. I’m waiting for the “pyrotechnic inventions” promised on the cover to appear. I will let you know when they do.