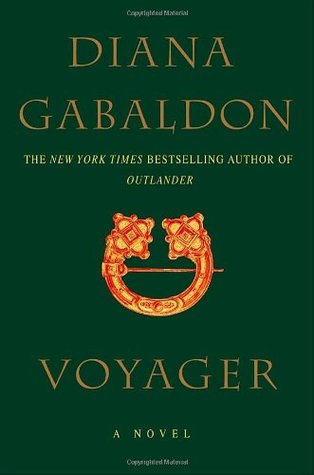 While I got a bunch of reading done over the weekend, somehow I don’t have anything to say about Voyager today. I suspect it’s because I want to just get back to reading it and screw blogging because I need to find out what happens next to Jamie and Claire!! Last night I had to stop reading right after Claire got press-ganged into serving as the Porpoise’s ship surgeon in the midst of an outbreak of typhoid fever. Oh, wait a minute. I’m jumping ahead. The last time I updated, Jamie’s print shop had just burnt down. Since then, Claire and Jamie travelled back to Lallybroch to return their nephew Ian to his parents, Jamie’s sister Jenny and her husband Ian after he ran away to Edinburgh to have adventures with his uncle. Claire finds out that Jamie at some point after obtaining his pardon that he married Laoghaire MacKenzie, Claire’s archnemesis from Outlander, who accused her of witchcraft in an attempt to get her killed and take Jamie for herself. Claire and Jamie fight, Claire leaves to go back to the stones at Craigh na Dun, and gets dragged back when Young Ian tracks her down after Laoghaire shoots Jamie and he is febrile and dying of infection (for the third time that I know of). Conveniently, Claire has brought penicillin back to the eighteenth century, and the antibiotic that is essentially useless in 2016 saves Jamie’s life.

And then, Jamie and Claire have to go get some buried treasure and take Young Ian with them (I’m not getting into this subplot because quite honestly I don’t get it), and when Ian swims out to the island with the seals to get the hidden treasure on a foggy, foggy day, he gets kidnapped and taken away on a boat to parts unknown. Somehow they figure out that the ship he was taken away on is bound for Jamaica, so Claire and Jamie hop on one of Cousin Jerome the wine merchant’s boats and take off after him. After some shenanigans with seasickness and thirty year old Fergus deciding to marry Laoghaire’s fifteen-year-old daughter Marsali and bring her on the Caribbean adventure, things seem to be going okay, until Claire gets taken aboard the Porpoise. And that’s when I went to sleep last night.

As much as I’m enjoying the ride that is Voyager, I have to admit that it almost seems like Gabaldon sat down when she was getting ready to start writing this book and came up with a list of outlandish situations to throw Jamie and Claire into and then strung them together into a novel. I’m sure that comment will irritate some Outlander fans, but come on! It’s true! I don’t remember ever thinking that events of Outlander or Dragonfly in Amber were over the top, but I’ve found myself thinking that every time something new happens in Voyager! Except when they were at Lallybroch. That part was lovely. And with that, I’m going to go to bed to find out what happens next to my favorite time-travelling surgeon and her hot ginger husband.

11 Responses to Progress! Update on Diana Gabaldon’s Voyager (by Jill)