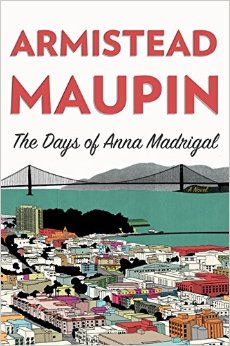 It’s really very unfortunate that this is the ninth book in Armistead Maupin’s Tales of the City series, and also the first one I’ve ever talked about on the blog. I started reading this series when I was but a child of seventeen. Or maybe sixteen. Probably sixteen. Armistead Maupin’s stories of a bunch of San Franciscans living and loving and doing drugs in the late seventies and early eighties started off as a column in the San Francisco Chronicle and were eventually published as a series of novels. I was first introduced to the series in 1993 or so when PBS showed a mini-series version of the first novel on Masterpiece Theater, starring Olympia Dukakis as Anna Madrigal, the pot-growing landlady of an apartment building on Russian Hill, at 28 Barbary Lane. The novel focuses on Mary Ann Singleton, a newly transplanted secretary from Cleveland, Ohio, and her adventures as she adapts to a much different lifestyle than the one she experienced in the Midwest. Of course, anything with my hometown as a setting/character fascinated me at the time, and still does. I got totally wrapped up in the miniseries and had to watch it over and over, and then we had to go to Green Apple and get all of the books, used of course, though the fact that I don’t have a set with all the same type of cover art has not ceased to annoy me to this day. This is a book-hoarder problem of the first order. Anyway, as time went by in the series, the focus shifted from Mary Ann, who after a time turned from our plucky lead character to one of the villains of the piece, in a way. It never made sense to me why Maupin changed her character as much as he did, and maybe it would make sense now if I reread them as more of an adult, but I don’t really know. Maybe Mary Ann changed with the times and all of the other characters preferred to stay in the seventies forever. Regardless, by the end of the primary series, Mary Ann has left San Francisco to the true San Franciscans, and a piece of my childhood died with her departure. That may sound like hyperbole, but I swear it isn’t. I had never before experienced a character in a novel (or in this case series of novels) who I had liked so much initially changing so much so as to become completely unrecognizable and also unlikeable. It hurt my feelings, and I kind of resented Armistead Maupin for a few years. Fortunately, Mary Ann Singleton redeems herself in Mary Ann in Autumn, a book which came out back in 2010, and details Mary Ann’s return to The City, and back into Mrs. Madrigal’s fold, though on a somewhat limited basis.

Truly, the entire series focuses on a moderately sized cast of major characters, with many minor ones who turn up from time to time, though the most important ones in The Days of Anna Madrigal are Mrs. Madrigal, or Anna; Michael “Mouse” Tolliver; Brian Hawkins; and Shawna Hawkins. The most important things to know about Anna are that she was raised in a whorehouse in Winnemucca, and when that was going on her name was Andy Ramsey, and she was a he. We didn’t find out that Anna was a transgender person until the very end of Tales of the City, and as time has gone by Anna has become an icon of the trans community in the Bay Area, or possibly the whole country. Michael and Brian were residents of 28 Barbary Lane back in the day. Michael is gay, and Brian was a heterosexual man-whore until Mary Ann made an honest man out of him. Shawna is Mary Ann and Brian’s adopted daughter, who Brian raises on his own with Michael’s assistance after Mary Ann takes off at the end of book six, Sure of You. There, I think we’re caught up on characters and relationships, at least for the scope of this review.

So The Days of Anna Madrigal is told as all of the Tales of the City books are, with the exception of Michael Tolliver Lives, with third person omniscient narration with each short-ish chapter focusing on a different character. The difference in this book is that we also flash back to Anna’s time in Winnemucca, back when she was still Andy, and only sixteen years old. Maupin has never done this before; his focus has always been very much the present day. I loved actually getting to meet Andy Ramsey. He seemed like a nice boy, and much more sure of things than I would have expected. I do wish that we’d gotten further into Andy’s story—he goes to war and gets married and has a daughter before he finally decides to live his life as the person he is inside. Maybe that will be a later story, though I got the impression that this was the end of the series.

One disappointment I had with this book was that so much of the present-day story line takes place away from San Francisco, at Burning Man, a week long art festival in the Nevada desert that defies explanation. I’ve never been, but I’ve seen pictures, and heard stories. The festival originated in San Francisco, which is, I suppose, why so many of the characters end up there, and why Armistead Maupin felt the need to write about it. Hell, he was probably at the first one, which according to Wikipedia was on Baker Beach (which is a beach in San Francisco, for those of you who don’t know) in 1986. Though I wish more of the action had taken place in The City, I did enjoy the trip to Black Rock City and Burning Man—I sort of want to go now, but it’s kind of really expensive. And I kind of hate being dirty. So maybe I won’t go.

I wish I had more to say about The Days of Anna Madrigal. It was just a nice visit with characters who are more like old friends to me. I’ve “known” these people for over half my life, and it made me a little sad to see how feeble Anna has become, and how old Michael, Brian, and Mary Ann are now. In my mind they’ll always be in their mid-twenties, partying at the bath houses, and not worrying about serious things like AIDS and ovarian cancer. But life is life, and I guess it’s good that Maupin has had his characters grow and change and all that, more real and all that.

Maybe I’ll have more to say in a couple of days, but maybe not. This book is pretty plot-driven, and giving too much of the plot away will probably ruin it. I thought that this was supposed to be the end of the series, but it didn’t seem to close the door on future installments, which I hope is the case. I’m not done hanging out with these people yet, and I hope I get to see them again.

This entry was posted in Armistead Maupin, Fiction - general, Reviews by Jill, Uncategorized. Bookmark the permalink.