A Review of Thomas Mallon’s Henry and Clara (by Bethany) 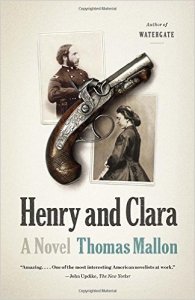 When I reported in on this book last weekend, I wasn’t sure how I felt about it. I think I felt 100% neutral about it, actually – and neutrality is unusual for me. I didn’t quite know what to do about it. By the end, though, I really liked it. The second half is much better than the first.

Here’s a little summary: Clara Harris and Henry Rathbone meet as children when Clara’s father marries Henry’s mother. Living in a blended household with their parents and five other siblings, they gradually become aware that they are in love with one another. Clara’s father, Ira Harris, is a judge, and later a senator. Henry’s mother, Pauline, is the sort of person who is attracted to power and influence. Her first husband – Henry’s father – was the mayor of Albany, NY, and one gets the impression that she married Ira not for his personal qualities but because he was also a prominent figure who could get Pauline close to powerful and exciting people. The family lives in Albany at first – where Ira is a judge – but they move to Washington, D.C. when Ira becomes a senator. They arrive in D.C. just in time for the Civil War to break out, and they spend their first few years there in a wartime city under siege conditions. First Lady Mary Todd Lincoln, not known for her equanimity, copes with wartime stress by surrounding herself with friends whose conversation she enjoys, and Clara is one of her favorite companions. The First Lady becomes very attached to Clara, much to the consternation of her stepmother, who had hoped that she would be the one invited to Mrs. Lincoln’s neverending slumber parties.

The family dynamics in the first half of the novel are plausible enough, but they’re also rather muted. I caught myself pining for certain other authors, namely Edith Wharton and Henry James, who I thought could have written this novel better than Thomas Mallon did. That’s a harsh thing to say, I know, but it wasn’t something I devised just to be nasty. These thoughts just appeared fully-formed: This novel would be SO much better if Edith Wharton wrote it, and so forth (this is, of course, true of most novels). The subject matter is tailor-made for either Wharton or James, and I think both of these writers would have sharpened the dialogue and heightened the irony in the first half of the novel in a way that would have improved the overall reading experience. However, Mallon really comes into his own as a novelist in the second half of the book, and by the end I really appreciated the novel for what it was and stopped wishing it could be something else.

Lots of factors complicate the burgeoning romance between Henry and Clara. First, the community as a whole thinks of them as siblings. Even when they remind people that they are only step-siblings and not blood relatives at all, they still get a lot of sidelong glances from their community. Second, Ira Harris doesn’t like Henry very much. Ira is the consummate politician, and he is always scheming behind the scenes to get cushy gigs for everyone in the family, including Henry, and Ira is always annoyed that Henry is not appreciative enough of his help and doesn’t work hard enough. Ira constantly compares Henry to his own overachieving son, Will. Pauline doesn’t like Clara much either, though for less precise reasons. Henry is her favorite child, and she seems not to think any woman will be quite good enough for him – and of course she is jealous of Clara, whose witty conversation makes her much more popular in society than Pauline is. For a long time both Pauline and Ira refuse even to consider giving Henry and Clara their permission to get married.

Then the Civil War begins. Clara spends the war keeping the FLOTUS entertained. Ira does his best to secure a desirable post for Henry, but Henry seems to have terrible luck and always ends up right in the middle of various bloodbaths. When he comes home, he continues to profess his love for Clara, but overall he is surly and unpleasant. He rarely wants to talk to anyone besides his mother, and he starts accusing Clara of flirting with other men whenever her gregarious personality attracts notice.

At the end of the war, Ira and Pauline finally consent to the engagement of Henry and Clara – both of whom are in their early thirties by this point. Clara has turned down many other suitors by this point – she’s almost a Penelope figure in her willingness to wait for Henry – including several who directly entreat her not to marry Henry because of the darker sides of his personality that emerge during and after the war. Henry and Clara are engaged – not yet married – when Ulysses S. Grant and his wife have to cancel a theatre date with President and Mrs. Lincoln at the last minute and the Lincolns offer the tickets to the young couple. After John Wilkes Booth shoots Lincoln, he stabs Henry brutally down the entire length of his arm. In the chaos that ensues, a doctor takes Henry home and tends his injured arm, and at Mrs. Lincoln’s request Clara follows the president to the house across the street where he spends the last night of his life.

Henry’s injury takes a long time to heal, and of course both Henry and Clara are traumatized by what happened at Ford’s Theatre. As rumors spread and the public continue to rehash what happened on the night Lincoln was shot, gossip starts to settle on Henry. Because he wasn’t stabbed until after Lincoln was shot – and because he was the only other male in the box besides Lincoln and an experienced soldier – people start to say that he should have defended Lincoln from Booth’s attack – or, at the very least, that he should have attacked Booth after the president was shot. Clara, Pauline, and others in the family shelter him from these rumors as much as possible, but he never loses his awareness of what the public thinks of him. As soon as he is recovered from his injury, Henry and Clara finally marry. Henry inherits a large sum of money from his father, and he uses the money to travel to Europe with Clara as much as he possibly can. They don’t settle in one place – they just dart from place to place for as long as a year at a stretch. This routine becomes tiresome to Clara quickly, and her annoyance with Henry’s itinerant lifestyle becomes intolerable after they have three children in quick succession.

Lincoln’s assassination takes place right at the midpoint of the book. The second half consists of journal entries and letters written by Clara interspersed with troubling domestic scenes – all of which make clear that Henry’s mental health is deteriorating. He seems to suffer from severe post-traumatic stress – from both the war and the assassination – and as time passes he even seems to have a dissociative disorder. Sometimes he doesn’t recognize people. Elsewhere he gets confused about what year it is, thinking he’s still a young man before the war. He becomes obsessed with history in general and in particular with destroying Lincoln’s reputation. He locks himself up in his study writing a neverending treatise on history that no one is allowed to read, and he subjects his children to daily lectures on history that sometimes go on for hours. If Clara were alive today, we would call her a classically enabling spouse, protecting Henry when his poor behavior draws public notice and allowing the family to withdraw into its own private misery. This second half of the novel really is quite good. Both Henry and Clara are sympathetic as characters even when they make poor choices. I’m not going to summarize any more of the novel because the second half really is quite suspenseful, and I think you might be annoyed with me if I discuss the ending.

I’ve wanted to read this book for a long time. It is the first in Mallon’s long series of historical novels, and I definitely plan to read the rest of the series. Mallon is a historian first and a novelist second, though I felt his prowess as a fiction writer growing as this novel progressed. The sense I get is that this novel is extremely well-researched and true to fact. At the same time, it feels entirely new. I recommend it and look forward to the next in the series.