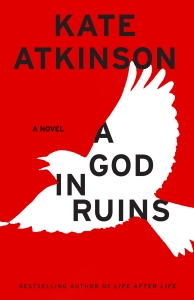 Let me tell you a little bit about A God in Ruins. Its protagonist is Teddy Todd, and the narrative swoops around, diving at will into various moments in Teddy’s life. We know his parents are Hugh and Sylvie and that he has two brothers – Maurice and Jimmy – and two sisters – Ursula and Pamela. He marries his neighbor Nancy Shawcross, and they have one daughter, Viola. Viola grows us to be a bit of a hippie; her children are Sunny and Bertie. She is also a bit of a bitch. Right now, she is busy checking Teddy into an assisted living home so she can move into his house and sell off all his stuff.

Teddy is a war hero. We know that he was a pilot in World War II and that he was shot down over Germany and taken prisoner. We also know that in general he does not talk about these experiences, though he thinks of them often. Whenever he contemplates his daughter’s selfishness or the helpless way her son Sunny floats through life, he compares them to his own endurance and courage as a young man – but not in a nasty way. He’s detached – but not from his memories of the war. He’s detached from the present. This detachment is clear to me as a reader but somewhat baffling to his family members.

I am still having some trouble distinguishing these characters from those in Atkinson’s Human Croquet. I do appreciate that A God in Ruins is told in the third person instead of in the weirdly off-putting first-person omniscient of Human Croquet, but I keep feeling like a guest who wandered into the wrong party. Where is the child molesting neighbor? Will Malcolm Lovat ever return the protagonist’s awkward affections? Will the party dress still be hanging on the door in the morning? These are two distinct novels, but some impalpable part of their reality is the same. It goes beyond simply having the same author. Most authors have character types and themes that they explore over the course of their careers. If I were inclined to jump to conclusions based on these two novels (which I am, sort of – but I’m trying to withhold judgment), I would say that Atkinson is a one-trick pony. I have it on good authority that the ending of the novel is fantastic, and I certainly appreciated Human Croquet more at the end than I did at its midpoint.

I did jot down a quotation that I liked: “The whole edifice of civilization turned out to be constructed from an unstable mix of quicksand and imagination” (116). This statement comes from a scene in which Teddy and his family share a meal right after war is declared. Teddy’s sister Ursula is privy to some inside information because she is dating a married naval officer. Teddy remembers that at the time he was shocked that his sister would be someone’s “other woman.” Teddy reminisces that by the end of the war, not much shocked him at all. Teddy’s statement above reminds me of a similar (but more sublime) statement in The Great Gatsby – whose narrator is a WWI vet – “…a satisfactory glimpse of the unreality of reality, a promise that the rock of the world is founded securely upon a fairy’s wing.” This sentence has a tendency to pop unbidden into my head every time I go off my antidepressants and then go out in public, particularly to big-box stores.

I also looked up a couple of words that intrigued me in A God in Ruins. The first is “growlery,” which is a room in Teddy’s childhood home that seems to be a study or a den for Teddy’s father. I more or less understood the word from its context, but I was curious to know whether Atkinson made it up or whether it was a bona fide word. When I googled it, I hardly expected to be directed first to the Frederick Douglass National Historic Site. According to this site, “a growlery is literally a place to growl. Charles Dickens coined the word in Bleak House, and Frederick Douglass apparently liked the word enough to apply it to a tiny stone cabin that sat at the back of Cedar Hill.” Google also directed me to an Atlantic article called “Save Growlery! The Social Networks of Old Words,” which is interesting enough to share.

The second word I looked up was “hirpled.” In the novel, it’s used in this context: “A woman hirpled along the corridor towards them with the aid of a walking frame” (153), so I assumed that it meant something like “hobbled” or “limped.” My Google search indicated that I was right, though Urban Dictionary adds that “hirple” is “pronounced to rhyme with ‘purple’ thereby denouncing the myth that nothing rhymes with purple.” And who doesn’t like denouncing myths?

I hope you enjoyed the little digressions I’ve included here in order to disguise the fact that I really don’t have much to say about A God in Ruins. I had a very busy week with little time to read, but the opposite is true of this weekend, so I’m hoping to be able to review the entire book on Sunday or Monday. I’m looking forward to the ending. My relationship with Kate Atkinson is a little strained at the moment, I’ll admit – but I do trust her to bring me to a good place.