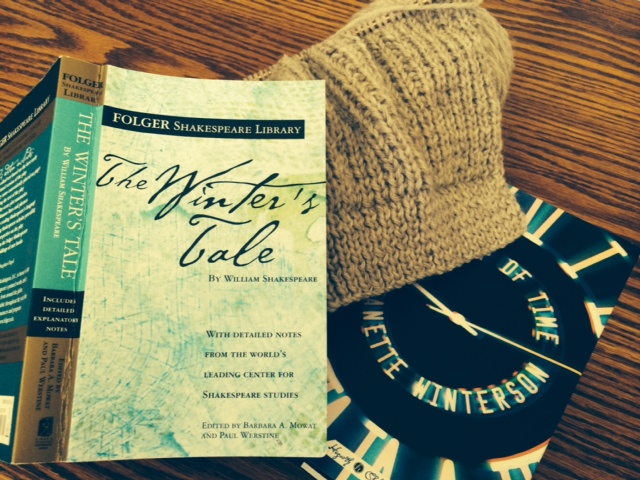 I haven’t been doing much knitting lately. I do still care about this project, but I’ve been reading more than usual and also working on another craft – beadmaking – that sucks me into its web once a decade or so. So the knitting project in the photo is nothing new, but that’s OK because I can take this time to tell you about a new reading challenge that I’m kicking off this week.

I learned via promotional email from Amazon that Hogarth Press is commissioning best-selling novelists to write modern re-tellings of all 37 of Shakespeare’s plays within the next several years (as far as I can tell there is no specific timetable published). The first novel in the series was just released: Jeannette Winterson’s A Gap of Time, a re-telling of A Winter’s Tale. I am reading A Winter’s Tale now and will start the novel once I’m finished. The next two novels in the series will be Howard Jacobson’s re-telling of The Merchant of Venice and Anne Tyler’s re-telling of The Taming of the Shrew. I am excited beyond belief about this project, which I think of as state quarters for book nerds, except the books will look better than the quarters when lined up on a shelf. And look how nice the two books look alongside my knitting!

I would LOVE it if some of our readers – or, of course, Jill – would like to read along.

Yarn Along is hosted by Ginny on her blog, Small Things.

6 Responses to Yarn Along