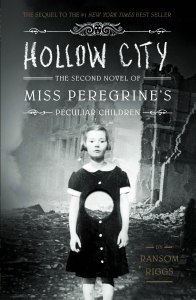 I’ll admit that I’ve been putting off writing my review of Hollow City. Not because I didn’t enjoy it, because I did. Mostly it’s because it’s the second book in either a trilogy or a series, and I haven’t felt like figuring out how much time to devote to summary of the first book what I thought was going to be a trilogy, but now I’m not so sure, based on some of the things I just read on Amazon.   Summarizing book one is complicated by the following: I read it in 2012 and I own a copy, but it is currently in circulation so I can’t reference it. But then I remember that it’s been fully a month since I wrote anything for the blog and I feel really guilty about that. So I’m going to just do the best I can.

If anyone knows anything about the first book in this series, Miss Peregrine’s Home for Peculiar Children, that person knows that it’s full of weird pictures. The author, Ransom Riggs, is a collector of old, bizarre pictures, and he uses them to craft his stories about these “peculiar” people, which is what he calls mutants or supes or witches. The primary protagonist is Jacob, a sixteen-year-old boy, who knows nothing of peculiardom until his grandfather is killed by a monster (which we later learn is called a hollowgast, or hollow) that only he and Jacob can see. He travels from Florida to an island off the coast of Wales with his father—I don’t remember why they go there—and ends up finding a school out in the woods filled with strange children and their teacher, Miss Peregrine. Turns out that most peculiars live in time loops to stay safe from the evil people of peculiardom, called wights, who are out to kill all “good” peculiars, especially the children. Groups of peculiar children are sequestered with protectors in time loops. The protectors are called ymbrynes—peculiar women who can manipulate time and take the form of birds. A time loop is just what it says, a constantly recycling loop of time. Miss Peregrine’s loop is in 1940, but as we learn in Hollow City, there are lots of loops in many different times. Jacob’s grandfather lived with the kids in Miss Peregrine’s loop when he was a boy, so they accept him quickly. At the end of the first novel, Miss Peregrine’s loop has been destroyed by wights, Miss Peregrine is trapped in her bird form and captured by the wights, the loop is destroyed, and the kids are on the run. They manage to get Miss Peregrine back from the wights, though she is stuck in her bird form. Jacob decides to stay with his new friends, primarily because he is in love with one of them, a girl named Emma, who can make fire with her hands, and who was in love with Jacob’s grandfather back in the day.

At the start of Hollow City, the kids are fleeing the island in boats, headed toward the mainland to seek help in London (apparently the capital of all things peculiar). They have lots of exciting adventures and eventually get to a loop where they find an ymbryne who has not been taken prisoner by the wights, Miss Wren, who is sequestered in a building covered in ice. She is able to finally return Miss Peregrine to her human form, only to find…. It was never Miss Peregrine who was travelling with them! It was her evil wight brother, named Caul. Things go sideways really quickly after Caul reveals himself, and the group of peculiar children gets separated. As the book ends, Jacob and Emma end up back in the present day, their mission to save Miss Peregrine not yet completed.

The third book in this series came out right before I started Hollow City, and I stupidly gave it to my boss to read, and now I wish I hadn’t, because I would really like to know how things turn out for Jacob and his friends. Sometimes the plot of Hollow City seemed a bit disjointed, as if Riggs tried a little too hard in this one to make the story fit with the pictures he had at his disposal at the time. I don’t remember noticing this quite as much in Miss Peregrine’s Home for Peculiar Children, and I’m concerned it will be more pronounced in the third book (called Library of Souls, to be reviewed on the blog soon!), but I still want to read it, because I’m invested in these kids. I want to know more about the wider world of peculiars than what I’ve seen so far, and see Jacob come into his own with his abilities to see hollowgasts (and also—spoiler alert—tell them what to do).