Another PAT CONROY MONTH!!!! Bites the Dust: Final Thoughts on South of Broad (by Bethany) 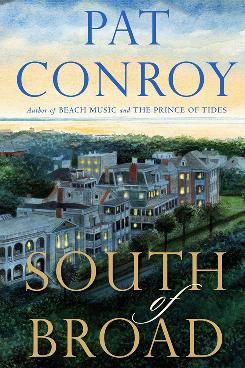 If it weren’t for this blog and its tradition of celebrating PAT CONROY every September, I would never have reread South of Broad. When I read it for the first time in 2009, I was highly attuned to its flaws. These flaws haven’t gone away – and I’ll outline a few of them below – but this time I thoroughly enjoyed my escape into Pat Conroy’s Charleston, where light dances off the river at sunrise, where good and bad are sharply delineated, and where the characters say one another’s names with every single line of dialogue. This isn’t an especially artful book, but I didn’t mind.

A vein of goodness and a vein of evil pulse under the surface of this novel, and by PAT CONROY’s standards these channels are managed fairly subtly. Evil takes the form of Trevor and Sheba Poe’s murderous psychopath father (who is not subtle at all, but he only appears on the page occasionally), the insidious racism and elitism of Chad Rutledge’s family, and the ongoing presence of Father Max Sadler, a priest and trusted family confidant whose abuse of Leo King’s brother Stephen led to Stephen’s suicide when he and Leo were only children. I remember that when I read this novel the first time, the discovery of a videotape of this abuse at the end of the novel seemed to come out of nowhere, but when I reread it I realized that it does not come out of nowhere at all but is instead clearly foreshadowed from the beginning when Max tells eighteen year-old Leo, in reference to his mother’s love for James Joyce, that “one must always forgive another’s passion” (20) and again a page later, more darkly, when Leo receives communion from Father Max and contemplates his lifelong relationship with Catholic mysticism. Note what Conroy does with pronouns here, especially with “he” and “him”: “When the priest called for water, I provided him with water. When he needed to cleanse his hands for the coming mystery, I emptied cruets over his fingers. When he called for wine, I supplied him with wine in the gold shine of chalices. At the moment of consecration, when he turned the wine into the blood of Christ and the bread into the body of the same God, I rang the bells that had been sounded beneath altars for two thousand years. When I opened my mouth and received the unleavened bread from the consecrated finger and thumb of the priest, I felt the touch of God on my tongue, His taste in my palate, His bloodstream mingling in my own. I had come back to Him, after a full-fledged embittered retreat, after He stole my brother from my bedroom and killed him in my bathtub” (21).

Do you see that? The narration is saying that capital-H He – God – took Leo’s brother Stephen, because that is what Leo thinks at this point in the novel. When I reread this passage having already read the ending, I recognize, of course, that “he” should be in lower case, as it is the priest, and not God, who pushed Stephen to suicide. I don’t mean to sound condescending, but I almost feel proud of PAT CONROY here. This subtlety goes above and beyond what I usually expect from him.

The vein of good in the novel, however, is not handled quite as shrewdly. The “good” characters in the novel practically pulse with heavenly light. The central figure in this league of extraordinary gentlemen is Leo himself, who bounces around from place to place waging war against hate, prejudice, violence, and pretension. He endures his mother’s grim frigidity with good humor, takes a years-long punishment for a crime he did not commit, puts himself in harm’s way confronting Trevor and Sheba’s father, single-handedly stops his high school from breaking out into a race war, punctures the pretensions of Chad Rutledge and his family, cleans up the pee and poo and vomit of an elderly man for whom he does court-ordered community service, and marries Starla Whitehead even though he knows she is too emotionally damaged to do anything but hurt him in return. It is true that Leo is damaged himself – we are told that he spends three years in a state psychiatric hospital after his brother’s suicide – and that people who are damaged and recover reasonably well can sometimes develop a precocious level of empathy and compassion for the suffering of others. But in Leo’s case, he seems to have recovered too well. Leo is the novel’s first-person narrator, and we should have access not only to his observations and experiences but also to his patterns of thought, the trajectories of his feelings, yet nowhere in the narration is there the kind of intensity I would expect from a protagonist with Leo’s psychiatric history. He doesn’t feel like someone who is conversant with darkness and demons, in spite of the fact that the narration continually insists that he has this kind of history.

This novel’s greatest flaw, though, is its tendency to disguise exposition as dialogue. If an author is going to write a novel about a group of friends who have known one another for years, are the godparents to one another’s kids, and have keys to one another’s houses, that author can’t write dialogue like “I envy you, Leo… You’ve got a wife who’s never there, and you write a gossip column that ruins someone’s life every six days” (177) and “Molly, you’re married to one of the most successful lawyers in the city. He’s from one of the oldest, most distinguished families in Charleston. You were destined to marry Chad Rutledge the day you were born” (168). While long-winded people certainly exist, most dialogue among adults takes place in a sort of shorthand. Even if people don’t know each other well, they skim over backstory and facts (consider the prevalence of idioms like ‘long story short’), and if they do know each other well, every conversation is a continuation of one that began in 1983 and has contained hiatuses of years or decades without losing integrity and momentum. This is the kind of relationship Conroy is trying to capture here, and in other aspects of his characterization he succeeds, but overall the dialogue in this novel is a disaster. Dialogue among intimates is hard to replicate on the page because its center keeps shifting from speaker to speaker, the heart of the conversation appearing and disappearing like so many fireflies. I sympathize with writers who can’t make plausible dialogue work, and I admire those who can. If I could magically make one thing in this novel better, it would be the dialogue.

But enough. During the ten days or so that I was reading this novel, I craved it on my drive home and wrapped myself up in it like sweatpants and a soft old blanket when I got home. Even if it’s true (and it is) that this isn’t one of PAT CONROY’s best novels, Leo King contains so much of each of Conroy’s earlier protagonists that I could almost trick myself into thinking I was reading The Lords of Discipline or The Great Santini or The Water is Wide. I don’t know if PAT CONROY “can’t” write about different sorts of protagonists or if he has just chosen to continue to explore the familiar, and ultimately it doesn’t matter. I love Pat Conroy’s protagonists: their vulnerability, their humor, their loyalty, their tirelessness, their kindness and decency born of suffering, their ability to seek out and destroy bullshit. I will keep reading no matter what.