Here’s Your One Chance, Fancy: Thoughts on the First Third of Edith Wharton’s The House of Mirth (by Bethany) 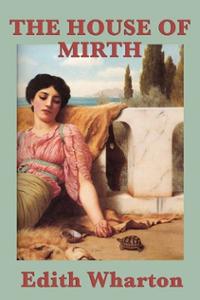 This may be the most irony-dense book I’ve ever read. I really don’t want to write a review – what I want to do is quote entire passages (page-long paragraphs in some cases) and then say “Isn’t this just horrible? And yet so honest? And yet so hilarious?” I’m not ashamed to admit that the point-and-grunt school of literary criticism sometimes has its appeal.

Our heroine is Lily Bart, who falls into the same general category as Ellen Olenska in The Age of Innocence and Isabel Archer in The Portrait of a Lady, which is to say that she has been raised wealthy and taught to live like a person of tremendous privilege but does not actually have any money herself. In Lily’s case, her father came home one day, said, “I’m ruined,” and then commenced his “slow and difficult dying” (30). Mrs. Bart spent a bit longer than average in Kübler-Ross’s first stage of grief – denial – insisting that Lily should continue to live like an heiress. For a while, Mrs. Bart and Lily “wandered from place to place, now paying long visits to relations whose house-keeping Mrs. Bart criticized… and now vegetating in cheap continental refuges, where Mrs. Bart held herself fiercely aloof from the frugal tea-tables of her companions in misfortune” (31). Eventually Mrs. Bart kicks the bucket as well, leaving Lily, who “became the centre of a family council composed of the wealthy relatives whom she had been taught to despise for living like pigs. It may be that they had an inkling of the sentiments in which she had been brought up, for none of them manifested a very lively desire for her company; indeed, the question threatened to remain unsolved until Mrs. Peniston with a sigh announced: ‘I’ll try her for a year’” (33).

Hang on. I want to say that one more time. Why? Because I can. Mrs. Peniston.

I’m joking around, but there is no question that the situation Lily is in is a grave one. It was through Wharton’s later novel The Age of Innocence, which I love, that I came to understand how the daughters of ultra-wealthy families in late-nineteenth and early-twentieth century were raised with blinders on. Men in these families were encouraged to look forward to introducing their wives to the world (to great art, to literature, to travel, etc. – and also to sex, of course, which is rarely even euphemistically mentioned), and young women then were kept distant from all of these subjects in order not to deprive their future husbands of the pleasures of educating them. One of the larger points made in The Age of Innocence is that in so carefully guarding their words and actions to make men think they are innocent, young women (and older ones too) are actually less innocent than men, who are innocent enough to believe that their wives have no opinions except the ones they have given them. So far in The House of Mirth the situation is graver: Lily really is innocent – dangerously so – and is also the locus of her family’s resentment at how Lily’s mother treated others. She is also 100% devoid of skills, except those involving flirting and manipulation. I think of Dorothea in Middlemarch exclaiming to Will Ladislaw with what she thought was audacious abandon, “We shall be married – and I will learn what everything costs!” As adorably innocent as this statement sounds, it reflects a knowledge of the world that Lily does not possess.

Except for the chapter spent on the backstory on how Lily’s parents lost their money and died, the first 80-some pages of this novel all concern a party held at the home of Gus and Judy Trenor somewhere in upstate New York. In chapter 1, Lily is in New York City waiting for the train to take her to the party when she meets Lawrence Selden, an acquaintance, who invites her up to tea and reveals that he lives in such squalor that he is required to turn his lamps off and on by himself. Their conversation in this scene is animated and honest, and I predict that Lawrence will be the Ralph Touchett of this novel – the decent, generous man the heroine embraces as a friend but passes up for marriage in favor of someone richer.

Next, Lily goes back to the train station and leaves for the party. On the train she encounters Percy Gryce, a rich young man who collects bric-a-brac. Gryce is the second bric-a-brac collector I have encountered in literature, the first being some yahoo in The Portrait of a Lady. Is ‘collecting bric-a-brac’ a fin de siècle euphemism for being a hoarder? I don’t know. Let’s just say that Percy Gryce is the guy who hid little doo-dads in attics all over New York, doo-dads that a hundred years later would be unearthed and trotted in front of the cameras on Antiques Roadshow.

With Gryce’s arrival, Wharton’s language becomes a bit… Darwinian. “She began to cut the pages of the novel,” Wharton writes, “tranquilly studying her prey through downcast lashes while she organized a method of attack. Something in his attitude of conscious absorption told her that he was aware of her presence: no one had ever been quite so engrossed in an evening paper! She guessed that he was too shy to come up to her, and that she would have to devise some means of approach which should not appear to be an advance on her part. It amused her to think that anyone as rich as Mr. Percy Gryce should be shy; but she was gifted with treasures of indulgence for such idiosyncrasies” (16). This kind of inner plotting continues for several pages, wherein we also learn that the Gryce fortune comes from Percy’s father, who invented “a patent device for excluding fresh air from hotels” (21) and that Percy’s mother is “a monumental woman with the voice of a pulpit orator and a mind preoccupied with the iniquities of her servants” (20).

There’s more, of course. We meet any number of Lily’s shallow acquaintances and learn the ins and outs of avoiding church when one is a young wealthy individual in the upstate New York of the early 20th century. Lily toys with Percy Gryce’s emotions at the party, is offended when she is summoned to her hostess’ room in the morning to help Mrs. Trenor answer her mail (apparently this is what happened to guests of this era who could not foot their own bill at parties) and (rightly) upset to the point of tears when she is pressured into playing cards and loses a significant amount of money to a guest she knows to be extremely rich, and then shocked when Lawrence Selden shows up, even after he said he wasn’t planning to, and seems determined to keep Lily company throughout the weekend.

So there you go. This novel is beautifully written though sometimes difficult to read because of some of the cringeworthy behavior of Lily’s social set. I’m reading it slowly, but I can always jump back in and feel well oriented even if I’ve been away from it for a week or more. I’m looking forward to reading more.