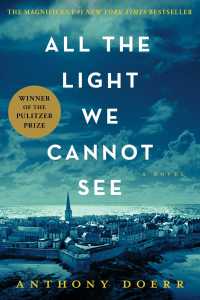 Long before this book became the 2015 Pulitzer Prize winner, to me it was a book with a pretty cover that Powell’s Indiespensible book club sent me. And then it was everywhere. And continues to be, over a year after it was first published. You know a book is popular when the paperback release date gets pushed back to two year after the release of the hardcover version. I, as is customary, got to this super-popular novel in my own damn sweet time, not because I wanted it to be less popular by the time I read it (that’s so something I did back in my twenties), but simply because it got buried in line behind other books that I enjoyed less, and some that I enjoyed more.

I’m sure most of the book-reading world knows by now that All the Light We Cannot See takes place in Europe during World War II. There are two protagonists: Marie-Laure LeBlanc, a young French girl, and Werner Pfennig, a young German boy. Their paths do not cross until the very end of the novel, in the French coastal town of Saint-Malo. The novel starts in 1944, right before Marie-Laure and Werner meet, and quickly jumps back to 1934, when Marie-Laure is six and Werner is eight. Marie-Laure lives in Paris with her father, who is the locksmith for the Museum of Natural History in Paris. She develops cataracts and goes blind shortly after her sixth birthday, so her father makes her a very detailed model of their neighborhood that she can learn where things are based on feel. Marie-Laure is generally a pretty happy kid. She goes to work with her father, she reads Jules Verne in braille. Werner, on the other hand, lives in a mining town in Germany, in an orphanage, with his sister. He discovers a propensity with radios at a young age, and he and his sister listen to voices far and near and it’s their means of escaping their dreary little town.

In 1940, everything changes for Werner and Marie-Laure. With the invasion of Paris, she and her father flee to Saint-Malo to stay with Marie’s shut-in uncle Etienne and his housekeeper Madame Manec. The story of their journey to the northern coast of France is not a pleasant one. At the same time, Werner is accepted into the National Political Institutes of Education; it’s a military school for the Third Reich. It’s kind of awful. The beauty of Saint-Malo and the bleakness of this school are well-juxtaposed in these sections. Eventually, Werner gets conscripted into the army at the age of sixteen (one of his teachers tells the army that he’s older than he is so he can use his talents in the war), and eventually ends up driving around Europe looking for illegal radio transmissions, which is how he ends up in Saint-Malo in August of 1944.

I don’t feel like doing any more plot summary, so I’m going to stop now. I enjoyed this book. Does it confuse me that a fairly simple historical novel won the Pulitzer Prize? Kind of. There were some subplots that I didn’t mention, of course. Werner’s friend from military school, Frederick, who is beaten half to death in an “exercise” late one night, and loves birds, is a tragic figure who has stuck with me. Etienne’s PTSD from The Great War that he works to overcome over the course of the novel is another subplot that I enjoyed. The hiding of the mysterious Sea of Flame diamond and the German officer’s never-ending quest for it, which is how Marie-Laure and her father ended up in Saint-Malo in the first place. He is charged with keeping it safe from the Nazis. (His name is Von Rumpel—he’s the face Doerr gives to Nazi Germany. And it’s not a friendly or a reasonable one.) It seems lately that lots of authors are presenting the Germans of the Third Reich as being equally as much victims of Hitler as the rest of the world. I always sort of thought that all Germans were happy followers of Hitler, but some of the books I’ve read over the past few years paint a different picture. Here, Werner is not a willing participant in Hitler Youth shenanigans, but he doesn’t have a choice in the matter. In The Book Thief, Liesel and her family and the other residents of her town are almost as terrorized as the Jews (that’s an oversimplification, of course, but they don’t really thrive under Hitler’s leadership). I know there are more examples, but since Bethany was just talking about The Book Thief it’s fresh in my mind. All the Light We Cannot See is, perhaps, deceptively simple, so deceptive that I didn’t realize how much goes on in its pages until I started listing off subplots in this very paragraph. It’s beautifully written without being too flowery. Its characters are well-developed, though I feel like Marie-Laure was not as well-rounded as Werner and some of the supporting characters. Mostly she was just Blind, and missing her father. She is brave, of course, but she never, for me, got beyond being a brave Blind girl.

I do think most people will get something out of this book and recommend it highly. Do I think it should have won the Pulitzer? It’s not for me to say. It’s definitely less of a downer than The Goldfinch. But it’s not a sweeping tale like, say, The Known World. It doesn’t “deal with American life,” like the Pulitzer folks say their winners “preferably” do. In fact, there aren’t any Americans in the novel, with the exception of the ones who bomb Saint-Malo practically to smithereens. And none of them are mentioned by name. But then, The Amazing Adventures of Kavalier and Clay won back in 2001 and that was a book about comic books. I guess there may not be any rhyme or reason to the Pulitzer Prize after all…. I half expect this book will be turned into a movie sometime in the next few years, and I’ll go see it if it is.