A Used Book Mecca Right in the Milwaukee Airport: Who Knew?

I wrote the following post around 1 am this past Saturday morning, after a long day of snafu-ridden travels. I was impressed with both the day I’d had and with the bookstore I discovered in the Milwaukee airport, which is the primary subject of this post. At some point I got up to do something else, and when I came back the post was gone. I did the usual things – checked for auto-saves and so forth, but with no luck, so I patched together a much-condensed version, posted it, and called it a night. The next day, I logged into WordPress, and there it was, so I’m happy to be able to post it now. More than 48 hours later, I can say that my weekend was a Choose-Your-Own-Adventure novel from start to finish. Now, at 3 am Pacific time on Monday morning, I am less impressed by the moderate chaos of Friday. Friday was for lightweights. However, Renaissance Books in the Milwaukee airport is just as exciting as ever. Here’s the post I meant to share with you on Friday:

Long story short, today was a day. My objective was to make it from San Francisco to Baltimore. I accomplished that objective, but the itinerary I ended up following bore little resemblance to the itinerary I started with. Let’s just say that I went states and states out of my way. But everything is OK, because 1) I made it to my destination safely, and 2) I happened upon an awesome used bookstore in the Milwaukee airport. Yes, really! Can we find whatever administrator who is responsible for putting it there and convince him/her to run for president?

There is a drama section…

… which is not to be mistaken for the “Drama, Circus” section:

There’s some evidence of a rivalry between certain Midwestern states:

And then there’s, um, THIS:

I didn’t buy it. Why didn’t I buy it? I can be such an enigma sometimes. I mean, not wanting to explain why I owned a half-priced Scientologist S&M comic book every time I went through security is a good reason, but still.

And finally, I promise you that I didn’t stage this next photo. This copy of My Losing Season was just sitting there on top of these serious-looking tomes, looking a bit out of place but still charming. It was just waiting for the folks at Postcards from Purgatory to happen upon it. 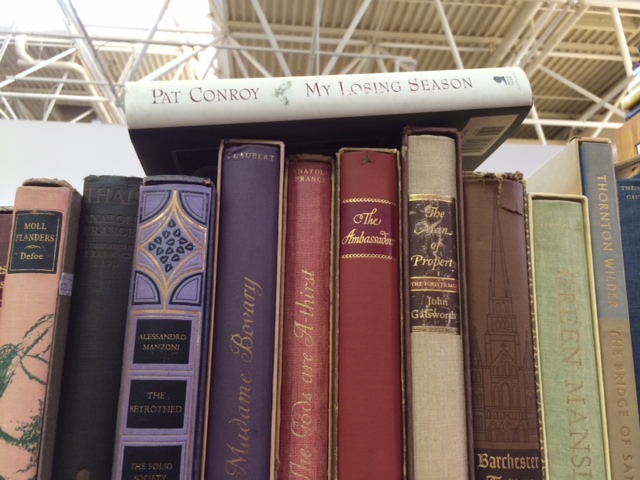 Next time you’re passing through Milwaukee, stop in and see it for yourself!

This entry was posted in Bookcase Art, Favorite bookstores, Glimpses into Real Life. Bookmark the permalink.

7 Responses to A Used Book Mecca Right in the Milwaukee Airport: Who Knew?