Review of Sebastian Barry’s The Temporary Gentleman (by Jill) 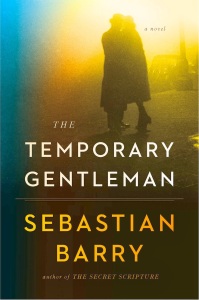 Remember the McNulty family of County Sligo? I bet you thought it couldn’t get worse than Poor Eneas McNulty being banished from his homeland by an IRA death sentence, or Poor Roseanne McNulty (neé Clear) from The Secret Scripture being kept in the local mental institution for most of her adult life, despite the fact that she was probably as sane as you or I. You were wrong. Because Barry’s latest novel introduces us to Jack McNulty. The difference with Jack is that his horrible life is about 99 percent his own doing, which is a departure for this family. I’m being generous by giving outside forces one percent of the responsibility for the mess that Jack’s life turns into. He’s a terrible human being, but somehow sympathetic. It’s good that Jack’s story is told in the first person because if anyone else had been responsible for telling the tale of his life there’s no way he would have been in the least bit sympathetic.

Jack is the second son in the McNulty family, and was a minor character in The Secret Scripture and The Whereabouts of Eneas McNulty. I don’t really remember much about him from those two books besides that he was there. I’ve spent the past hour looking up those two books online and haven’t been able to find any mention of him besides in my review of TWEM from last year. And all I said was that Eneas had a brother named Jack. If only I had my own copies of the books. I’ve been resisting buying the Kindle versions of them both for the past few days.

Barry starts The Temporary Gentleman off with a bang—within ten pages of the opening (or at two percent into the book, since I read this on my boss’s Kindle), Jack is in a shipwreck. I was surprised to find such an action-packed first chapter in a Sebastian Barry novel, but it got me sucked into the book with surprising effectiveness. Barry’s books are usually fairly quick reads, but this one was especially so. Jack’s misadventures hooked me about as quickly as Adam Stenson’s mental decline in The Harder they Come did. The shipwreck happens in the middle of Jack’s story, during WWII. After that we jump both forward and backward. The present-day of the novel finds Jack in late 1950’s Ghana, shortly after it became independent from British rule. He’s recently lost his job and really should go home to Ireland, but has remained in Africa because he doesn’t have a whole lot to go home to. He begins writing the story of his courtship and marriage to Mai Kerwin in a little notebook that he keeps with him always. The novel is a combination of that story and his life in Africa while he is writing of his marriage.

Barry keeps Jack’s true nature (his father-in-law called him a scoundrel) fairly under wraps for maybe half the book. There’s mention of his drinking, but then all of a sudden it comes out that he’s gambled away Mai’s inheritance and lost her parents’ house to the bank. Somewhere along the line Mai has become a closet drunk, Mai who never touched a drop of alcohol when she and Jack were first together. Around the time Jack loses the house, Mai “comes out of the closet,” as it were, and things devolve from there. Mai’s alcoholism is compounded by post-partum depression (or whatever they called it back in the 1930’s and 40’s), and soon enough her drinking problem is much worse than Jack’s. It’s awful to read. Of course, Barry manages to make it all beautiful, because he’s talented like that, but oh dear, what a mess Mai makes of herself. And Jack just keeps running off to war or Africa or anywhere, leaving their two daughters at home to take care of their mother. You remember how I said that Eneas McNulty’s name should have been “Poor Eneas?” Jack’s should have been, “Jack, you fool.” The worst part of it is that Jack and Mai really do love each other, despite how horribly they treat each other as their circumstances deteriorate over the years. Their marriage is a tragedy of the first order, almost Shakespearean.

Let’s see, now. What else do I want to say about The Temporary Gentleman? I don’t know. It was beautifully written and so sad. I loved and hated Jack McNulty, but I didn’t wish him ill. I simply wanted things to have turned out differently for him and for Mai and their daughters.