Early thoughts on Diana Gabaldon’s Dragonfly in Amber (by Jill) 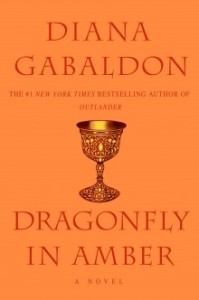 I’m so pleased to be back in Claire and Jamie’s world! I love it here. I must admit to “cheating” a bit with this series of books. I’ve read about all of them on Wikipedia and elsewhere, and I’ve devoured all of Bethany’s posts about the books in the series. I’ve actually been planning to read the Outlander books since 2009 (that means I bought them all then) but avoided starting them because of the length and because I knew at the time that I would have a hard time stopping reading them once I started. Now, of course, I am much more disciplined a reader and I know that it’s best to spread out a series like this for maximum page views.

I’m only about sixty pages into the book, but I’m enjoying it so far. This book is not told entirely in the first person, though I know it switches to Claire’s voice once we go back to the 1700’s. The bulk of what I’ve read thus far is third person limited to Roger Wakefield’s point of view. Roger is an Oxford history professor who was raised by a good friend of Frank’s, Rev. Wakefield. Claire and Frank actually spent time with him in Inverness in Outlander before Claire went through the stones at Craigh na Dun, and met a very young Roger briefly. Rev. Wakefield has passed away, and Roger is cleaning out the house. I’m not sure how Claire knew to find him in Inverness, now that I think about it, but I assume I’ll learn more about that later. Claire comes to Roger with a proposal for a research project, and a list of names. It’s a list of men (and their wives) who may have been killed at the Battle of Culloden. This battle was a major turning point in the Jacobite uprising in Scotland: in short, it was a rout, and the uprising is basically squashed after this battle, or at least that’s the impression that I get about the whole thing. I’m hardly an eighteenth century Scottish history scholar. She wants to know what happened to all of these folks, who were all from Jamie’s family estate, Lallybroch.

Claire brings her twenty year old daughter Brianna Randall with her to meet with Roger Wakefield.  Brianna is American, Frank and Claire having moved to Boston at some point after Claire returns from her life in the 1700’s.  Claire has also become a doctor in the intervening twenty-ish years, which I like.  I think this may be Brianna’s first trip to Scotland?  It seems like it is.  I think starting the book in the twentieth century was an interesting device on Gabaldon’s part.  It was disorienting, but in a good way, though I’m getting impatient to get back to Claire and Jamie’s story.  All these vague half-truths Claire is telling are beginning to annoy me.  Get on with the real story, damnit!

As an aside, Roger and Brianna are definitely attracted to each other, and it’s adorable in a childish sort of way. I mean, Brianna is twenty, and I have no idea how old Roger is, maybe late twenties? And when did people in their twenties begin to seem like children? I hate getting old sometimes. Anyway. It looks like I have about thirty pages to go till I get to go back in time again, so I’m going to get on it.