And now for something entirely different…. My Review of Jen Lancaster’s The Tao of Martha (by Jill) 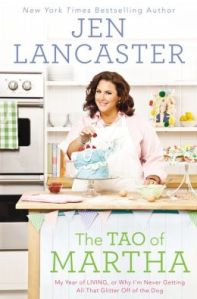 As I’ve been reading Jen’s latest memoir this week, I realized that I’ve read a pretty big variety of books so far this year, from popular teen literature to a Man Booker Prize winner. What’s been absent has been nonfiction, and also humor. The exception is that a few of the stories in the McSweeney’s anthology were amusing. But generally I haven’t read anything that’s made me laugh out loud this year. I’m way overdue for some Jen Lancaster. In fact, I’d go so far to say that my reading schedule owes me some Jen Lancaster. I have very mixed emotions about Martha Stewart, and the fact that my favorite blogger/memoirist/light fiction author decided to spend a year trying to embrace the Martha way of life made me a bit nervous. I was worried that Jen was going to change, and be some sort of tidy and organized serious person. So far that hasn’t happened, and I’ve been enjoying Jen’s latest book.

I wrote that paragraph Thursday morning at like 8am, never thinking that I’d have enough time throughout the day to actually finish The Tao of Martha. Why I didn’t know that I’d be able to finish it is actually something of a surprise. I can usually plow through Jen Lancaster given a few hours and a comfortable chair. And after I finished, I promptly started a movie on On Demand, opened up my laptop to start my post, and fell asleep before the opening credits were done. Hence the lack of a post on Thursday. Sorry.

So the good news is Jen does not become a Martha Stewart clone at the end of the book. She’s still Jen, just a somewhat more organized Jen. I don’t know why I expected anything else. The book opens at the end of 2011, which was apparently not the best year ever in Jennsylvania. She decides that to make 2012 a better year, she should try living according to Martha Stewart’s basic principles: be organized, be crafty, be well decorated. Some of Jen’s projects are relatively easy, like cleaning out the junk drawer and organizing her desk and linen closet. Some go sideways really quickly: like the tasteful 4th of July celebration that morphs into a white trash hootenanny when Jen gets carried away purchasing decorations online when she doesn’t have time to make her own. But sometimes they go perfectly: like her Christmas party that sounded like it was so fun and beautiful that I wish I could have been a guest.

The non-Martha Stewart thread running throughout the whole year is the story of Maisy, Jen’s wonderful dog. She has been treated for multiple types of cancer over the past few years, and in the midst of her 4th of July preparations, Jen and her husband Fletch find out that Maisy has gone into kidney failure. (The veterinarian in me, of course, wants to know why this happened. Was it because of the cancer? Because of all the chemo she got? Or just because she’s an old dog and kidney failure happens sometimes? Where are her bloodwork values, Jen? Don’t you think some people want to know how Maisy’s creatinine is doing?) The parts of the book in which Jen writes about Maisy are my favorites, and also I think her best. Jen Lancaster loves her cats and her dogs, and that’s one reason why I will love her forever. If me buying a copy of each of her books allows her to take good care of the Thundercats and Loki and Maisy and Hambone and Libby, I’ll do it. Maisy was her first dog, and she appeared on the scene somewhere in the midst of Jen’s first book, Bitter is the New Black. Maisy is Jen’s loyal companion through all of her memoirs, and was often mentioned on her blog back in the day, usually with pictures of all the horrible destructive things she did when she was a puppy. I’ve known this dog her whole life, albeit virtually, but I didn’t know any details of her death until Thursday. And I was so sad to read about it, almost as sad as I’ve been when I’ve lost patients who I’ve known for a long time. Jen put into words everything I felt when I lost my dog Spinner in January, and also how it feels to watch your precious dog decline and you are powerless to stop it. “I figured that since I’ve been actively dreading this moment for the past three years, I’d somehow be better equipped to handle it. I’ve been trying to prepare myself ever since her diagnosis. Yet was we sit on this cold tile floor, holding my precious baby, I can’t for one second imagine my life without her (146)….” And then, towards the end, “Everywhere we look in the house, there are signs of Maisy, whether it’s the ottoman she chewed long ago or the E-Collar I used to help steady her while we gave her fluids. Each time I walk past her love seat and she’s not there, I break into tears. The worst part of all this—outside of missing my girl every second of every day—is that I feel like I wasted three years of my life worrying about this moment. I mourned her long before she was gone. Despite all my anxiety, the worst happened anyway. I thought somehow I was bracing myself against the sadness by preemptively fretting, yet all I did was waste the time I could have had being happy. That is, except for the past two months. I knew we were on borrowed time, so I made the most of every single moment, and when Maisy left this realm, there was no question in her mind as to how much we adored her (186).” I love this passage so much. I want to put it on my wall. Or on a T-shirt.

In the end, the blonde that ties the stories in The Tao of Martha together is not so much a certain media mogul, but a fat blonde and white pit bull with the cutest half cocked ears. And I loved it because of that. Now, lest we think that Jen’s book is flawless, I do have a couple of concerns. It tended to be a tad disjointed, reading more as a series of essays than a whole book. Her last few books have tended to be this way, and it’s always sort of annoyed me. This one is actually better than My Fair Lazy was, because these tasks all had to be related to Martha Stewart in one way or another. In the earlier book, the connection was much more vague: stuff Jen thinks she should do to become a better, more cultured and well-rounded person. Also, and this makes me feel terrible to say, but there was a bit of over-mentioning of Jen and Fletch’s more humble origins: they were both unemployed, completely broke, without electricity, and almost a place to live following the dot.com bust of the early 2000’s, back before Jen decided to become a blogger/writer. I get it, we know, you are living in a fancy house in Lake Forest, Illinois now, but just a few years ago you were worse off than most people. You aren’t entitled. You’re a real person who has overcome adversity. You appreciate everything you have. But maybe don’t mention it every forty pages? I will give props to Jen for always varying the way she said it each time, as well as that when it came up it was germane to whatever else was going on at that moment. I know that was a big event in Jen’s life; it practically changed everything about her. As if I don’t think about/talk about vet school every day. As if I don’t think, “if I hadn’t gone to vet school, my whole life would be so different now” at least three or four times a day. Okay, I take back what I said before about that annoying me about the book. Jen can talk about the events of Bitter is the New Black as much as she wants to. As long as next time she talks about Such a Pretty Fat, too. That one was my favorite! The issue with posting reviews about books written by bloggers one has followed for the better part of a decade is that one (i.e. me) feels like she is insulting a friend when she criticizes writing style, etc. But I doubt Jen will ever read this blog post, even though she does follow me on Twitter (or at least she used to), because I started following her ages ago, back when people always followed people who followed them. Regardless, of how much Jen wants to talk about her success and her “cutting garden” and her pool guys and her gardener, she will always be the “Bitch from Bitter” to me. And that bitch is hilarious.

This entry was posted in Jen Lancaster, Nonfiction - General, Reviews by Jill. Bookmark the permalink.