A Review of John Renehan’s The Valley (by Bethany) 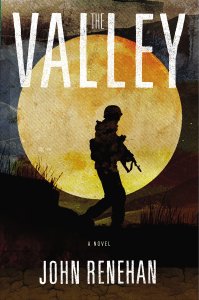 One of the few good things to come out of the long, ambiguously-defined war of the last thirteen years is a small but notable selection of good fiction. The first round of September 11-themed fiction was as strident and shrill as might be expected, but now that time has passed and veterans and other insiders are starting to transmute their experiences into fiction, this sub-genre is becoming incredibly rich and varied. John Renehan’s The Valley is probably the best novel I have read about this war and is on equal footing with some of the best novels from other wars. The novel I thought of most while I was reading is Karl Marlantes’ Matterhorn, which I loved.

The Valley is about Lieutenant Black, who returns to his desk job in Afghanistan after R&R leave and is soon assigned to investigate a complaint filed by Afghan villagers about a soldier who fired warning shots into a crowd and partially damaged a family’s home. This investigation requires Black to travel into “the valley,” a remote, rugged mountain location. The outpost he is sent to (called Vega) is the farthest point the Americans have reached in this part of Afghanistan. The area teems with Taliban fighters, who use the rugged terrain to their advantage, but it also contains anti-Taliban villagers who view both the Taliban and the Americans as their enemies. When I started the book, I thought it was going to be hard to avoid comparisons to Heart of Darkness (and Apocalypse Now). While it’s true that the premises of the two novels are identical, I soon stopped thinking about Conrad and Coppola and was more than happy to take this novel on its own terms.

We know from the outset that Something Bad happened to Black before this novel begins. The very first chapter of the novel contains a dream Black has when he is still in the U.S., and we get the sense that his R&R leave was designed to distance him from his previous traumas. Periodic flashbacks to Black’s land-navigation training in Officer Candidate School help to unify Black’s present-time plot with his past experience via the techniques of land navigation under cover of darkness – a skill set that plays an important role in both incidents. We’re also told that Black was given his current desk job because he is considered unfit for combat – and when his commander presents him his orders to go to the Valley, he offhandedly mentions that “maybe this will be the way to feel good about your service again.” Do you find that sentiment uplifting? No, Black didn’t either.

Because a convoy bearing supplies and personnel only risks the trip to Vega once a week, Black plans on a seven-day journey. The same convoy that brings Black to Vega departs soon afterwards bearing (without Black’s knowledge) Lieutenant Pistone, Vega’s platoon leader and only resident officer. Obviously Pistone is an important person for Black to interview, and Black is annoyed that his visit to Vega has been so poorly timed. Black meets Sergeant Merrick – the highest ranking NCO and second-in-command after Pistone – and Sergeant Caine, who at first mistakes Black for an Afghan fighter wearing a stolen U.S. uniform.

This episode, in which Caine tackles and interrogates Black until Black’s flawless English persuades Caine that Black is in fact an American, has implications that reverberate throughout the book. First, it characterizes Caine as an outstanding fighter: alert, ruthless, and strong. Later we witness the platoon making a hasty retreat after an incident in the village; during this retreat, Caine demonstrates not only his ability to sprint up steep mountain trails but also to do so while haranguing less-fit soldiers to maintain a quick pace. Caine’s confrontation with Black also characterizes him as tense and suspicious (this is a rational state of mind for a combat soldier, of course, but we see throughout the novel that Caine is more tense and suspicious than most). This scene also plants in Black’s mind the fact that the infiltration of Vega by Afghan fighters in stolen U.S. uniforms is a real threat, and the novel later proves this threat to be real indeed.

In his first days at Vega, Black meets a variety of individuals with knowledge of the incident in the village: Oswalt, whom the others describe as “special”; the cheerful, nervous Corelli; the hostile, recalcitrant Shannon; Brydon, a medic nicknamed “the Wizard” who confides in Black but also proves himself to be traumatized and fragile; an Afghan civilian interpreter named Danny; and a mysterious Special Forces officer known only as “the Monk.” Black is quartered in Lieutenant Pistone’s hooch, and by the end of his time at Vega he has read Pistone’s journal and even thumbed through his high school yearbook, the inscriptions in which suggest that the adolescent Pistone was friendless and victimized.

In some of my reviews I speak candidly of the endings of novels, but in this case I’m going to demur. This novel is driven by suspense, and I have a couple of things to say about the way Renehan creates this suspense (see below), but I do think that this is the sort of novel that can be “ruined” by a reviewer divulging too much of the plot. I’ll just share a few details: the plot revolves around a brick of heroin, a separate and secret investigation being conducted unofficially by Sergeant Merrick, and a mysterious soldier named Traynor. Traynor is listed on all official platoon rosters as an active-duty soldier at Vega, but all of the other soldiers Black interviews insist that he’s dead. There is also an attempt at using Coleridge’s “Kubla Khan” to give some texture and mystery to the novel. I sort of snickered at this. I know that “Kubla Khan” is about Afghanistan and was written after an opium dream (and opium is another plot strand in this novel), but it’s just too well-known to use in this way. I knew at the first reference to “Xanadu” all that Renehan would be able to do with this motif, and I was right: he didn’t come up with anything that surprised me. In fact, the “Kubla Khan” references start to fizzle out about 2/3 of the way through the book. It almost feels as if Renehan saw that his attempt to connect his war novel to Romantic poetry was headed nowhere and decided to abort the mission.

While I enjoyed this novel and often had trouble putting it down, ultimately I’m not sure how well it holds together. Any novel that is driven by suspense has to find a workable way to reveal information to the reader. If a novel has a first-person narrator (this one doesn’t), the reader often learns the facts of the case right along with the protagonist. In The Valley, the point of view is usually limited to Lieutenant Black, but it does sometimes veer away from him. For example, the reader knows about Tajumal, an Afghan child determined to destroy “infidels,” long before Black meets her. Most of the time, though, we are with Black, and it can be easy to forget that the novel is written from the third person. I felt entitled to all of Black’s thoughts and was annoyed when they weren’t provided. For example, when the Special Forces officer known as the Monk is leaving Vega on an extended mission, he hands Black an envelope addressed to a woman in the U.S. and asks Black to mail it when he returns to his headquarters. Black keeps the letter, but several days later, for reasons that are not clear, he opens the letter and reads it. We’re never told exactly what Black learns from the letter – although we do know (or at least strongly suspect) that it gives Black the information he needs to find a hiding place for Corelli when he is in danger and/or to help defend Vega during a massive attack that takes place when both Sergeants Merrick and Caine are off the base.

In other ways, the suspense works well. One of the key questions of the novel concerns Black’s growing understanding of the two sergeants. In simple terms, he has to figure out which one is the good guy and which one is the bad guy (he knows at least one of them has got to be corrupt). Renehan sustains this mystery all through the novel and reveals the facts the reader needs to know in a perfect order and at a perfect pace. Elsewhere, details are “left flapping” (an expression from the novel that means that someone is left isolated and without support or backup). We never learn, for example, why Pistone brought his high school yearbook with him to Vega (I mean, who does that?). And there are some revelations about “the Monk” at the end of the novel that I don’t believe for one moment. But overall this novel is well worth a reader’s time, and I recommend it.