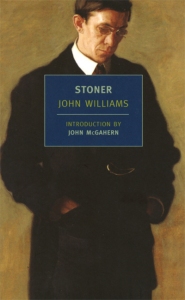 I bet everyone has heard of at least one of these books, and I bet it isn’t the one by the guy with the same name as the guy who composed all the music for all the Star Wars movies. (No, it isn’t that John Williams. It’d be cool if it was, but it isn’t.) Let me tell you how I ended up reading these two very dissimilar books at the same time. After I finished my slog through Death with Interruptions, I picked up the next in the pile of books my boss Cathy gave me from her friend Jerry. She really enjoyed Stoner, actually, and said I’d like it too. I’m also on deadline to finish this one so she can get it back to Jerry. I think she’s seeing him on Saturday, actually…. Ooops. Stoner was originally published in 1965, and was re-released in 2003 by the New York Review of Books. It takes place in the early twentieth century, primarily on the campus of the University of Missouri, were William Stoner is a student, then graduate student, then professor of English Literature. So far, it’s been the simple story of an everyman, but it’s simply and clearly written, with standard punctuation (quite a relief after reading the last book I read). The story is no less compelling for its simplicity. Williams is describing a place and time that is long since gone, and his protagonist pulls at my heartstrings, even though if I’d known him I might not have liked him very much. He’s gotten himself into a loveless marriage to a cold fish named Edith, who may possibly be crazy, and back in the first few decades of the last century men didn’t get to express their feelings. So he just sucks it up and is unhappy in silence. I actually just got to a point where my stomach has gotten tied up in knots over what his wife is doing to sabotage the relationship between Bill and their daughter Grace, and I had to put it down for a bit.

So I started Stoner right after Death with Interruptions. And then we watched the movie adaptation of Divergent, which was actually pretty good, in case you were wondering. Like The Hunger Games, but without the fight to the death on television stuff. I’ve had Divergent (the book) for a while, because my friend Lauren told me to read it. She is a lover of dystopian young adult fiction, and I do always love what she tells me to read (I read The Hunger Games trilogy on her recommendation, as well as The Handmaid’s Tale, among other things). I’ve been putting off reading Divergent primarily because I wanted to read the whole trilogy sequentially and fast, because that’s how I like to read young adult trilogies, but the next two books haven’t come out in paperback yet! But the second one comes out in paperback next week, so there will be only one to buy in hardcover, because now that I’m committed there’s no way I’m stopping. Curse these trilogies and their addictive stories. I started this book because I wanted to see who was right on a plot point that came up when my husband and I were watching the movie (in case you were wondering, I was right), and I was hooked after the first chapter. I think it’s possible that the only thing Stoner and Divergent have in common is that they both take place in the Midwest, Stoner in Columbia, Missouri, and Divergent in a future/post-apocalyptic Chicago, where Lake Michigan is a marsh, and there’s a zip line through the top of the John Hancock building. The gist of life in our main character Tris Prior’s world is that at some point some people decided that to maintain peace in Chicago they needed to build a wall around the city, and divide people up into “factions” based on their primary personality traits. For example, the Erudite value knowledge; the Dauntless value courage; the Amity value kindness; the Candor value honesty; and the Abnegation value selflessness. This all seems like a play on the houses at Hogwarts in Harry Potter to me, but that’s okay if it gets kids reading and thinking about literature and the similarities and differences between different series of books. People choose their faction based on the results of an aptitude test that’s administered when they are sixteen (because we all know who and what we want to be at sixteen, right? God, sometimes I sound like such an old lady. Truthfully, I would have picked Erudite at sixteen, and I would probably still pick it now.) Tris starts out in Abnegation, and never feels like she fits in; she doesn’t think of others before herself with the ease that her parents and older brother seem to. She watches the Dauntless, and sees their joy as they run everywhere and jump onto and off of trains, and thinks that she wants to be one of them. When she takes the test, her results are surprising. The test administrator tells her that she’s “Divergent,” or she fits into three of the factions, Erudite, Dauntless, and Abnegation. Divergent people are rare, and some think, dangerous. The test administrator realizes that this could be dangerous for Tris, and manually enters her result as Abnegation. She tells Tris not to tell anyone, not even her parents, and tells her to go home. Tris ends up choosing Dauntless, though she vacillates between that and Abnegation, because she doesn’t want to leave her parents, though she knows in her heart that she doesn’t belong in Abnegation. Dauntless initiates have to get through a several week initiation/training period which I’m in the midst of reading. Tris is becoming stronger, but her co-initiates are starting to figure out that there is something different about her, and they feel threatened, so much so that a few of them just tried to throw her into “the chasm,” an abyss in the middle of the Dauntless compound. There’s also a love interest, named Four, who is one of the trainers of the Dauntless initiates. There is more about him, but I’m going to save some stuff for my actual post about Divergent.

I’m enjoying both of these books quite a lot, and I’m actually surprised that I’m having such an easy time switching back and forth between them. Usually I have a hard time doing that, or prefer one to the other and end up just really reading one of them. But it seems that the seriousness of Stoner and the fun/suspense of Divergent are the perfect combination for me right now. They’re both very accessible and entertaining and go quickly. I must also say that Divergent is pretty good for a first novel written by someone in her mid-twenties.

Perhaps 2015 will be the year of me reading two books at a time all the time. I guess we’ll just see what happens. It’s only fifteen days into the year. Anything can happen!

4 Responses to A tale of two books: Progress Report on John Williams’ Stoner and Veronica Roth’s Divergent (by Jill)