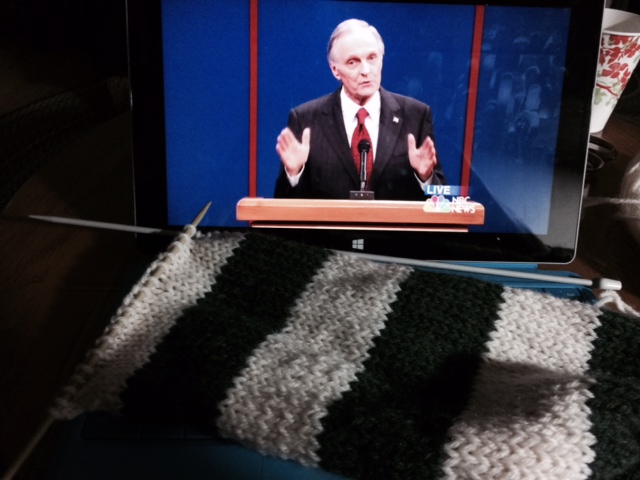 One of the highlights of my holiday season was when I found out that The West Wing has a seventh season. I thought the series ended after Season 6, and I was watching season 6 with some trepidation because none of the plot lines seemed to be coming to a close. I was racking my brain to remember how the series ended, but I’m pretty sure these final seasons originally aired between 2002 and 2004 – years that are more or less a black hole in my life when it comes to awareness of anything that happened anywhere on earth other than a particular prep school campus in Connecticut. Then one episode ended and another began, and the new episode was labeled “Season 7, Episode 1.” Who knew?

Season 7 is odd to say the least, if only because the plot rarely involves the president, and most of the original staff is off is off working on the campaign of the Democratic candidate they hope will be Bartlet’s successor. Alan Alda plays the Republican candidate. In the photo above, I tried to capture the fact that the elderly Alda is a dead ringer for Mr. Burns on The Simpsons, but the photo doesn’t really capture it. I think you have to see him in profile. The nose makes all the difference.

I am still finishing up a couple of Christmas  sweaters that just didn’t get finished during the holidays. I’m moving at a good clip now that I’m back to my usual routine. The photo doesn’t show it, but the dark stripes are a lovely forest green – one of my favorite colors.

The fact that there  is no book in this photo does not indicate a departure from this blog’s usual mission.  We are as pro-book as ever around here, although it’s true that it’s taking me longer than usual to finish the novel I’m currently reading. But no worries – both Jill and I will be back soon with more reviews.  Happy New Year to all our readers – we hope you are all doing well!

Yarn Along is hosted by Ginny on her wonderful blog, Small Things.

This entry was posted in Yarn Along. Bookmark the permalink.