A Review of Richard Rodriguez’s Days of Obligation: An Argument with my Mexican Father (by Bethany) 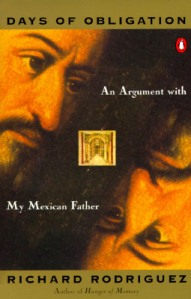 Richard Rodriguez’s memoir Hunger of Memory has been a favorite of mine ever since I first read it as a freshman in college. The American-born son of Mexican immigrants, Rodriguez wrote in that book about juggling two cultures: the close-knit, Spanish-speaking world of his family and the world of schools – a world he entered as a five year-old in Catholic school and on some level never left, since he remained in school long enough to finish a Ph.D in English and then remained as a professor.

If books could have college degrees, Hunger of Memory would have a bachelor’s degree. It is accessible, well-reasoned, and smart. His second memoir, Days of Obligation: An Argument with my Mexican Father, however, has a Ph.D – not so much in English but in cultural studies or anthropology, any subject that aims to look at the human race dispassionately, as if through a telescope. Most of this novel is very abstract and theoretical. I liked the abstract and theoretical parts best, though I suspect others will disagree.

Rodriguez begins with a poetic meditation on the ideas of comedy and tragedy (in the classical sense of these words, as defined by Aristotle) in the lives of Mexican-Americans. He argues that “Mexico plays the tragic part; California plays the part of America’s wild child” (xvi). He places the cultural battles and negotiations that went into the question of whether California would be part of Spanish-speaking Mexico or of the English-speaking U.S., pointing out that these negotiations took place in the aftermath of the Protestant Reformation (which is the era whose literature Rodriguez specializes in). He quotes Harvard professor Josiah Royce, who “believed that some epic opportunity had been given California – the chance to reconcile the culture of the Catholic south and the Protestant north; that California had the chance to heal the sixteenth-century tear of Europe” (xvi). Rodriguez identifies Mexico with the classical idea of tragedy and California with the idea of comedy, reflecting that “I think now that Mexico has been the happier place for being a country of tragedy. Tragic cultures serve up better food than optimistic cultures; tragic cultures have sweeter children, more opulent funerals. In tragic cultures, one does not bear the solitary burden of optimism. California is such a sad place, really – a state where children run away from parents, a state of pale beer and young old women, divorced husbands living alone in condos. But at a time when Californians are driven to despair by the relentless optimism of their state, I can only marvel at the comic achievement of the place, California’s defiance of history, the defiance of ancestors” (xvi-xvii). This passage comes close to putting its finger on my own ambivalence toward my home state. Rodriguez doesn’t capture my feelings exactly, and of course my own relationship to California has nothing whatever to do with comparing it to Mexico, since my family has no ties there (I might argue that all long-time Californians are impacted in some way by Mexico, even if they’ve never been there. But first I would have to do a little thinking and research, and who wants to do that?).

After the introduction, the first chapter in this book is called “India.” He uses this term to mean Mexico, in a reference to the fact that India is what Europeans first thought they’d found when they landed in the western hemisphere. He writes about both the United States’ and Mexico’s aboriginal people: “In the [American] public-service TV commercial, the Indian sheds a tear at the sight of an America polluted beyond recognition. Indian memory has become the measure against which America gauges corrupting history when it suits us. Gitchigoomeism – the habit of placing the Indian outside history – is a white sentimentality that relegates the Indian to death” (5). This new idea was not new to me, but I was surprised and fascinated by Rodriguez’s next idea: “whereas the United States traditionally has rejoiced at the delivery of its landscape from ‘savagery,’ Mexico has taken its national identity only from the Indian, the mother. Mexico measures all cultural bastardy against the Indian; equates civilization with India – Indian kingdoms of a golden age; cities as fabulous as Alexandria or Benares or Constantinople; a court as hairless, as subtle, as the Pekingese. Mexico equates barbarism with Europe – beardlessness – with Spain” (12). I had never quite considered this idea, and I don’t know my Mexican history well enough to judge the claim, but I am intrigued by it. I am also intrigued by this: “The Indian is forever implicated in the roundness of the world. America was the false India, the mistaken India, and yet veritable India, for all that – India – the clasp, the coupling necessary at the end of the quest” (7). And by this, which seems a stretch (albeit a fascinating stretch): “Where do the Beatles go when the world is too much with them? Where does Jerry Brown seek the fat farm of his soul? India, man, India!”

I am aware that I’m engaging in the “point and grunt” method of literary criticism – an approach I usually don’t condone. It’s hard to review a book that introduces ideas that I am not prepared to accept or reject. I know that Rodriguez is a controversial figure in the academic world; he has written many articles in favor of the western canon and in opposition to a multicultural curriculum and (most famously) to affirmative action. I know people who will reject anything Rodriguez writes without reading it because they so disapprove of his stance on affirmative action, calling Rodriguez a hypocrite who has the gall to criticize a system from which he benefitted, suggesting that these critics assume he would not have been admitted to Stanford, Columbia, and U.C. Berkeley (where he earned his bachelor’s, master’s, and Ph.D degrees respectively) without his Mexican heritage, which is a snotty – though probably statistically accurate – thing for his critics to imply.. Sometimes I am sympathetic with Rodriguez’s views. I agree that white privilege is a problem in our country (and elsewhere) and that, in a perfect world, colleges and universities (and K-12 schools too) ought to be intellectual utopias where everyone can interact as equals with everyone else and status is based on merit alone. At the same time, I am not sure that affirmative action as it currently exists is the best way to achieve this kind of utopian vision – though it’s also true that I can’t propose a better solution (at least, a solution better than a lot of people riding around in the backs of pickup trucks yelling through bullhorns, “Stop categorizing people based on the color of their skin, you idiots!”).

The book becomes less abstract after this first chapter; Rodriguez writes about California history, about a trip he took up and down the coast, visiting all of the original missions. He writes about Huck Finn, which he defines as the authoritative text on America’s “eternal rejection of school and shoes” (163). He writes about gay life in the Castro district during the early years of AIDS. He writes about his parents (although the “argument with [his] Mexican father” in the title remains ethereally vague, the idea becoming even more elusive when Rodriguez argues that Mexico is, in his mind, “female” while the United States is “male”) and his own exploratory excursions into Tijuana and other border towns, and about Asians (in their role as California’s “other” high-volume immigrant group). One chapter is about a legendary California outlaw named Joaquin Murrieta, who was beheaded after his death and whose head is still at large. I had never heard of Joaquin Murrieta (although I took a thorough course in California history in elementary school – those missions, holy crap, all those missions! – and used to stop often at the Jamba Juice in the town of Murrieta when I was on my way to San Diego in my own days living in inland southern CA). But at the same time, even though I learned something new, the chapter about Murrieta was perhaps my least favorite in the book. I like Rodriguez when he’s all abstract and ethereal and theoretical and Shakespeare-alluding. What do I need with cowboys and Indians?

I enjoyed this book overall, though I’m a little hesitant to recommend it because I know that this kind of book – the intellectual cultural memoir, with very few actual people in it – is an acquired taste. If you’re intrigued by what I’ve written here, I recommend that you read Hunger of Memory. I’ve known people to have very negative reactions to that book, although I’ve never understood why. When you finish it, ask yourself if you’re content with the bachelor’s degree or if you want to go on for the Ph.D.