A Review of Susanna Kaysen’s Cambridge (by Bethany) 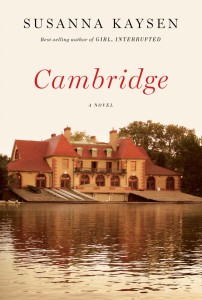 Through no conscious design of my own, I appear to have been reading a lot of books lately that walk the shifting line between memoir and autobiographical fiction. I am aware, of course, that to a writer of either of these genres, the distinction is a moot point. The writing process – character development, the unfolding of action through conflict and dialogue, a protagonist who learns and grows, a narrative voice that withholds some information in order to let readers judge the characters for themselves, and so forth – is the same whether one is writing a work that will be marketed as “truth” or one that will be marketed as “fiction.” Like more and more novels these days, Cambridge proclaims on its cover that it is a novel. Have you noticed this? Right now, I am reading Michael Cunningham’s The Snow Queen: A Novel, and soon after that I will begin to read Mona Simpson’s Casebook: A Novel. Is it just me, or have novels become a lot more self-conscious in the last couple of decades? The twenty-first-century novel is so sure we will misjudge it.

Cambridge proclaims itself a novel, but it seems unaware of the blinking neon sign over its head announcing MEMOIR MEMOIR MEMOIR. I’ll work through my reasons for this statement, none of which is evidence, exactly – they’re really just elements of a vibe this book gives me, a certain je ne sais quoi that suggests memoir. First and lamest is the fact that Susanna Kaysen is a noted memoir writer already. This fact is lame because of course it’s possible for a writer to work in multiple genres. However, when a memoirist releases a new book in which her protagonist at the outset is a six year-old girl named – wait for it – Susanna Kaysen, a reader can hardly avoid speculating that the label “a novel” on the cover is a misnomer.

At the outset of the book, six year-old Susanna is miserable because her parents have moved her away from Cambridge, Massachusetts. They are spending a year overseas – first in England and then in Italy – because her father, an economics professor at Harvard, has received a Fulbright. The time is the early 1950’s, and only occasionally have I seen Britain’s austerity years described so well. To six year-old Susanna, England is a land of scary toilets. The only toilet in the rented house where the Kaysens lives is in the basement, at the end of a long, dark hallway, and it is so high that mounting it requires (from a child) a running start. The toilets at school are not much better, and Susanna is generally resentful of school, where she is expected to learn the multiplication tables by rote and the teacher has organized a year-long unit on early man that requires endless pretending to start fires with flints. Susanna likes Italy better, but it isn’t until the family returns to Cambridge at the end of her Fulbright year that she feels at ease.

There is something wrong with the Kaysen family, and it’s hard to put my finger on what exactly it is. The household includes her father – who hates messes – and her mother – whose vague unrest seems to stem from the fact that she is not a famous concert pianist (though she is an excellent pianist and plays at home with such passion and fervor that Susanna instantly freezes up when she goes anywhere near a piano, convinced that she will never be able to play and even a little angry that she was not born with the ability to play any piece perfectly without effort) and also possibly from the fact that even though she is educated and intelligent, she is essentially a “housewife” without a sense of purpose – plus Susanna and “the baby,” whose name, Miranda, is mentioned only once and who is always described in infantile terms even when she is old enough to go to school – and, during the first half of the book, a Swedish nanny named Frederika whose love life is the object of endless experimentation and manipulation on the part of Susanna’s mother. Also present at times are two Indian brothers, Jagdeesh – a Harvard colleague of Mr. Kaysen – and Vishwa, an orchestra conductor hired by the Kaysens to try to coax Susanna out of her fear of the piano. Once Vishwa has become a fixture in the household, Mrs. Kaysen directs her attentions to arranging a match between him and Frederika, a match that succeeds for a while but falls apart on a tragic scale during a cross-country car trip. Mrs. Kaysen also interferes quite obnoxiously in Jagdeesh’s love life. Their social circle is rounded out by the Bigelows: married psychoanalysts and their son, Roger, who is Susanna’s good friend.

Many of the oddities of the way information is released in this book (the characterization of Susanna’s sister, for example) can be explained by the fact that the narrator is a child (six years old at the outset, eleven at the novel’s end). The problem, though, is that the narrative voice does occasionally reach into the future – to state that Miranda will eventually change her name to Jaye when she is an adult, for example. These little lapses – this one and maybe two or three more, none of which seems essential to the book – indicate that the true narrator of the book is not the child but the adult Susanna Kaysen. She finds the thoughts and feelings of her younger self closely accessible – perhaps more accessible than her adult sensibilities, as she never really reveals to my satisfaction what kinds of discontent are at the root of her family’s strangeness and sadness. In my training as a writer, I was taught to use flashbacks and similar jumps through time extremely judiciously. Flash-forwards were even more verboten than flashbacks. If there is a flash-forward in a novel, there had better be some kind of plot line happening in the future that is essential to the narrative. There’s no such future plot line in this book, unless of course you count the fact that Kaysen’s most famous earlier work is Girl, Interrupted, which is published as a memoir and relates the time Kaysen spent in a psychiatric hospital as a teenager. While I have not read Girl, Interrupted, and while it has been years since I saw the movie, it seems to me that Cambridge can be understood best as a prequel to this earlier work. It felt important to me as I read this novel to know that young Susanna – with her fierce likes and dislikes, wild imagination, staunch individuality, and strange aversion to both of her parents – would spend time hospitalized for mental illness five or six years after this novel ends. For this schema to make sense, though, we have to understand Cambridge as a memoir, not as a novel.

The book is organized around a series of places: London and Italy in the first chapters, then back to Cambridge for a few years, then finally to a summer on Cape Cod with the Bigelows and then to another year abroad, this time in Greece. Part of what makes this book interesting is how cut off the Kaysens are from what Susanna thinks of as “real Americans.” Their circle consists entirely of intellectuals and elites: Harvard professors, orchestra conductors, and psychoanalysts; even Frederika, the nanny, is described as some kind of Swedish royalty whose circumstances have been reduced. When Susanna attends a school on a U.S. army base during the family’s time in Greece, she describes this experience as “[her] first encounter with real Americans,” children who “chewed gum – totally taboo in our house. They ate sandwiches on soft white bread, another household no-no: whole wheat, please, or rye. The boys were tall and many were chunky. Most of the girls had breasts, or if they didn’t, they were pretending to by wearing bras they didn’t need. They had jingly charm bracelets with poodles and Eiffel Towers dangling off” (212). Fundamentally, this is a narrative about a girl who is always at odds with her surroundings. Highly aware of detail, she is acutely impacted by what is and is not “home” for her. She seems to share very little of these feelings with her parents, and to me the fact that she is, at least when her family is home in Cambridge, in the almost-daily presence of psychoanalysts yet is never treated with much sensitivity is a telling detail. Even if you don’t enjoy obsessing about the nuances of genre the way I do, there is much to enjoy in this book, which is well written and quirky. The bizarre ending – involving a soiled sanitary napkin and the ruins of the site believed to be the House of Atreus and thus the site of some of the bloodiest stories in Greek mythology – is worth the cost of admission in and of itself. I recommend it – novel or not – to a wide variety of readers.