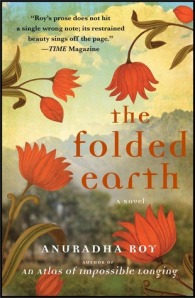 The ending of this book punched me in the gut when I read it last night. It was so sad, and took me by surprise. I’m not going to say anything else spoiler-ish about the ending because I actually think doing so would take away some of the power of the ending. After I read it, I thought back and these “shocking” discoveries were perhaps not entirely unexpected if one was being a very careful reader, which I was not being for the most part. I was so caught up in the beautiful language and the stories of Charu and Maya and Diwan Sahib that I forgot stuff. I guess that’s okay from time to time, isn’t it? One minor complaint about the ending that I have is as follows: I was very much expecting this novel to have a tidy no loose ends ending. I was fully expecting to learn how things end up for the major characters. But that was not to be. Roy got kind of arty at the end, and that almost always annoys me. This time, it was cool. Too often I let the ending of a book ruin the whole thing for me. This time it didn’t happen. I think that means I must be growing as a reader.

I did have a few small thoughts about the rest of the second half of The Folded Earth, but the time I set aside for thinking about them today while I was at work was taken up by ruminating on the ending. I wanted to talk about Charu’s flight down the mountains to Delhi to find her true love, Kundan. I wanted to make fun of Mr. Chauhan some more. I wanted to discuss the back of the book blurb and these alleged “power hungry politicians” who were supposed to be the major antagonists of the novel. They never showed up in any significant way. Granted, there is an election that happens towards the end of the book, but it is merely a thing that is happening in the lives of the characters we are following. I didn’t find that Maya was “determined to protect” her “beloved mountain community.” Yes, it is her home, and she wants to protect the people she cares about, but after I read the back of the book I thought she was going to be marching against some sort of dictator, not teaching school and spending time with an old drunken former public official. But I did not have time for any of that today. It didn’t help matters that I was busy at work today and my lunch/playing solitaire on my phone/thinking about the book I’m reading was taken up with thinking about the amazing and just so sad ending rather than thinking about anything that would make up an interesting blog post for anyone but me. And possibly Bethany, but really just me.