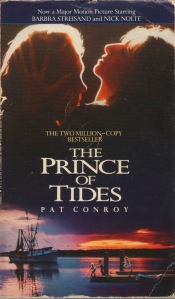 I was thinking that it’s really bad that we’re already over halfway through PAT CONROY MONTH!!! and I haven’t posted anything about Pat Conroy yet, but then I looked back in the archives and discovered that last year I didn’t post anything about actual books I read for our special month until December. So now I feel better. This year I think I’m only going to read The Prince of Tides as an official PAT CONROY MONTH!!! selection, though I need to go back through My Reading Life and pick some books out of there for future “inspired by Pat Conroy” reading options. Bethany is hard core and reading War and Peace. That book scares the crap out of me, mostly because of its length. That being said, I have wanted to read more Tolstoy since I first read Anna Karenin(a). Maybe someday.

But wait! I was supposed to be talking about The Prince of Tides! I first read this book in probably 1992 or 1993? After The Lords of Discipline and before The Great Santini. I have seen the movie version more times than I can count, but not in many years. I remember enjoying it at the time, but as time has gone by I can only focus on how absurd a romantic relationship between crazy Nick Nolte and the legendary Barbra Streisand seems when I remember the movie. In addition, all I remember about the movie is said relationship, and not any of the typical Conroyvian family drama, of which there is plenty in the novel. When I was younger I did enjoy this book quite a bit, but I don’t remember the details of the plot other than the relationship between Tom Wingo and Susan Lowenstein, and that’s probably because it was such a focus of the movie.

I haven’t picked up The Prince of Tides in a few days: work has been really busy and I’ve been getting home late and I have found this book really heavy, more heavy than Conroy’s other books that I have read/reread in the past few years. I’ve not been in the best mood lately so that may be coloring my viewpoint, but I don’t think it is. I believe from the memoirs Conroy has written since this book was published that he was not in a good place when he was writing The Prince of Tides, and that is shining through for me.  Tom Wingo seems to have no joy in his life.  He says the typical sarcastic sorts of things that all Conroy protagonists say, but they aren’t said in a happy (that isn’t quite the right word but it will have to do for now) way.  It comes off as bitter and angry and sad, and that isn’t usually the case.  The other interesting thing to me is the portrait Conroy paints of the mother character this time: it’s not a positive one, and historically, for example in The Great Santini, the mother figure is practically a saint, but not here. Here, she is selfish and distant and self-involved. In Conroy’s non-fiction he speaks this way about his own mother. I admit, I preferred the saintly mother of Santini. This one is not a nice lady.  The father is the typical Conroy father, though we haven’t seen much of him in the present day story line yet.  I know Don Conroy redeemed himself a bit at the end of his life, but I can’t remember if the Shrimp Boat Captain version of him did.

Here’s something else.  This is the first book of Pat’s that is written looking back on the events of a miserable childhood.  The Lords of Discipline is written looking back but there is no present day narrative.  We just know that the events at The Institute took place a while ago.  And The Great Santini is written in third person without a narrator to say that any time has gone by.  Beach Music and South of Broad are also written with a present-day narrative interspersed with flashbacks.  As such, it seems that he is able to insert more of his own emotions into the story, you know, as they are at the time he’s writing. I’m wondering if this is good or bad or what.  And I think I know what I’m reading for next year’s PAT CONROY MONTH!!!!, or maybe I’ll even get into one of those this year.

So that’s it for now. I’m falling asleep as I type, so I’m going to close for tonight.

4 Responses to Welcome to PAT CONROY MONTH!!!, 2014 edition–Jill’s first progress report on The Prince of Tides