And now it’s Saturday and I still haven’t read enough in K&C to do a proper update. Most recently, Joe and Sammy have been dragged to a Greenwich Village party with a bunch of odd types. Salvador Dalí is there, hooked up to a primitive SCUBA suit, and Joe saves his life with his lock picking skills. And he meets a girl! And that’s about all. I made the mistake of reading the Wikipedia page about this book, and got some spoilers that I found a bit disappointing, so that might be why I’m less enthused about reading right now. All I was doing was trying to figure out which characters that Chabon is trying to make seem like real folks are actually real historical figures, and then I found out some stuff about the woman Sammy marries and I got kind of bummed out. I did figure out how to pronounce the author’s last name: it’s Shay-Bon (like Shea Stadium and Bon Jovi according to a quotation from the author himself), which is how I guessed it was pronounced but I’ve never been sure. 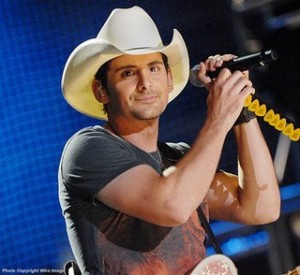 Tonight I will be at a concert (Brad Paisley, who is pictured above, at Sleep Train Amphitheater in lovely Wheatland, California), so I won’t be able to read much of anything for the rest of the day, which is why I’m posting now rather than trying to power through some of my book. Were we not going with friends I would definitely be reading in the car on the way there, and possibly also at the concert before the music starts. It’s okay though. Tomorrow I have another car trip to look forward to. The point is that I’m still liking The Amazing Adventures of Kavalier and Clay, despite my apparent inability to make a dent in it. Thank heavens my Numbers Challenge book for August is a quick one.