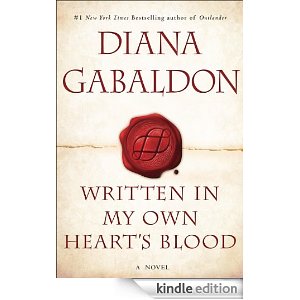 This is going to be a quick post – I am scrambling to finish a freelance editing job that’s due on Wednesday, and my weekend was busy with Father’s Day activities on both Saturday and Sunday, so I haven’t read much at all in the last few days. But I do want to take a couple of minutes to check in about Written in My Own Heart’s Blood.

I’ve read 14% of the book – which I think may correspond to about a hundred pages. I am reading it on my Kindle, and this is one of those annoying books that won’t tell you what page you would be on if you were reading a paper book. I hate that. Tomorrow morning I will be passing by a bookstore (ha! As if I could ever just pass by a bookstore!) and plan to look at the paper edition and find out how many pages are in it so I will know approximately how many pages I have read. Because if there’s one thing my life needs right now, it’s more math.

I hate to say it, but the opening of this novel feels a lot like the opening of The Fiery Cross – and this is not a good thing. All of the major characters are isolated from one another. Lord John Grey is being held prisoner by the militia. Jamie Fraser left him with the rebels and was waylaid on his journey home by a back injury; at the moment he is hanging out with some Quakers and try to stave off his unspeakable frustration at not being able to go home to Claire and hear from her what he has already heard from Lord John: that Claire and Lord John have had sex. Claire has saved Lord John’s brother – Harold, Duke of Pardloe – from a near-fatal asthma attack and is now dosing him with laudanum and holding him prisoner for a reason that – unfortunately – I have forgotten. He is an English officer and Claire (secretly) sides with the Americans, so this may be the only reason she’s refusing to let him go – but I forget.

Other major characters from the past novels have barely even stepped on stage: Ian Murray and his beloved, Rachel Hunter, have only appeared in one short chapter so far. Brianna and Roger and their children haven’t stepped on stage once, although it’s true that they’re back in the 20th century (a friend told me that when they finally do reappear, the chapter is titled “Meanwhile, Back at the Ranch”). William Ransom, whom I continue to find an absolutely lifeless and boring character, has literally spent the first 14% of the novel roaming around Philadelphia getting increasingly drunk and complaining to prostitutes about the fact that he is a bastard (a fact that we the readers have known since Voyager).

Isolating all of the characters from one another may heighten the tension for them, since they are terribly worried about one another and desperate to reunite, but it does nothing for the reader. Gabaldon should either have summarized each character’s journey briefly, bringing them back into one another’s presence for some direct conflict within the first 10-20 pages of the novel, or she should have forgotten about the journeys altogether and opened the novel right where An Echo in the Bone ended: on the front steps of Lord John Grey’s house in Philadelphia, where Jamie Fraser and Jenny Murray appeared (in spite of the fact that they were supposed to be dead) to find that Claire has married Lord John, and where William learns that Jamie Fraser, and not Lord John, is his father. Hal could have stopped by as well, since I like the sparks that fly when Lord John and his brother fight.

One of the things I learned when I heard Diana Gabaldon speak last week is that Written in My Own Heart’s Blood will NOT be the last book in the Outlander story as it was originally intended. “The story isn’t over,” Gabaldon said. “There will be at least one more book.” That’s fine and good, but I do think Gabaldon could stand to be just a bit more efficient in her storytelling. I would be very interested to see this storyline and characters written by someone like Deborah Harkness, who also writes wild, implausible plots but manages to keep them efficient and under control.