A Review of Leif Enger’s Peace Like a River 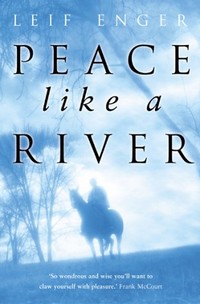 An evil ex-boss of mine loved this book, and for this reason, I’ve always been prejudiced against it. This boss was sort of a wispy person, as if she were made of spiderwebs, and I’ve always imagined that this book was made of spiderwebs too. And in a way it is: the language is lyrical and ethereal, the plot largely internal and tied to the narrative voice, which is that of an adult looking back at his childhood experience with occasional references to the future (which is, of course, the narrator’s present). It’s bleak and dismal, with occasional glimmers of almost-transcendence. The writing is outstanding, although many of my favorite passages come not from the narrative itself but from the excerpts of the metrical poems about cowboys and outlaws that the narrator’s nine year-old sister Swede likes to write. I broke my long-standing promise never to read this book because a fifteen year-old friend recommended it to me (I’m not sure why, but when kids recommend books to me, I almost always read them; when adults recommend books, I often buy them, but more often than not I relegate them to a shelf and save them for Purgatory), and when I mentioned to her that I found the plot a little slow, she looked at me in surprise and said, “Oh, didn’t I tell you that? The plot’s not very good. I just recommended it to you because of the language.”

So there you go. We should all have fifteen year-olds in our lives who recommend books to us because of the language.

Reuben Land, eleven years old when the events of the novel take place, suffers from breathing problems. When he was born, his lungs failed to take in air, and the doctor pronounced him dead. Reuben’s father Jeremiah took Reuben out of the doctor’s hands and commanded him to breathe, and he did – he breathed enough to save his life but not enough to save himself from a lifetime of severe asthma. Jeremiah – a janitor at the local high school until he is fired because the superintendent suspects him of being drunk in church and accuses him of this transgression in front of a cafeteria full of children (including Land’s own), and Land refuses on principal to defend himself in front of children – is known for performing miracles. His first is his resuscitation of Reuben in the hospital; later he pulls off a loaves-and-fishes routine when an overbearing guest (“the wind blew over his big besmirched cheeks and exposed earlobes with no effect. He was like a small, hot, talkative planet” [115]) arrives for dinner , and he even heals the superintendent’s chronic skin condition right after the superintendent fires him. He can’t always perform miracles on demand, however, and his ability to channel the divine (or whatever) doesn’t save him and his children from the suffering they endure in this novel.

Reuben’s siblings are seventeen year-old Davy and nine year-old Swede. The initial conflict in the novel is the fact that two local hoodlum types attacked Davy’s girlfriend in the women’s locker room at school. Jeremiah Land – in his role as janitor – intervenes and uses force to protect the young girl. Immediately the family becomes extremely tense, knowing that the boys will retaliate against Jeremiah and possibly against his family. When the boys do enter the Land house, they head straight for Reuben, and Davy – who was waiting for them – shoots and kills them. The bulk of the novel, then, concerns what happens when Davy is tried and convicted but escapes from prison and goes on the run, pursued by a Captain Ahab-like federal agent named Andreeson. In one of the novel’s less plausible moments, the obnoxious traveling salesman who earlier showed up for dinner and prompted Jeremiah’s loaves-and-fishes miracle dies shortly after Davy breaks out of prison, and in his will he leaves the Land family his brand-new Airstream trailer. This is a tough plot development to take seriously, but I suppose that once an author has established that a certain character can perform miracles (or that spiritual energy tends to align itself in fortuitous ways around him, or whatever), the usual rules of plotting no longer apply.

So Jeremiah, Reuben, and Swede Land take off to search for Davy. They don’t have any leads about where he might be, but on a hunch they go to the home of a hunting buddy of Jeremiah’s, who reveals that Davy did stop by his house soon after he escaped. This friend gives Jeremiah some suggestions about where to look, and the Lands set off again. Jeremiah’s special spiritual joo-joo allows them to evade police officers in every town, who find it suspicious that the entire Land family left town soon after Davy escaped and are staking out major intersections in each town. All the while, Swede is writing an epic poem about the Wild West (her protagonist is “Sunny Sundown”), portions of which are included in the book and complement or comment on the journey the Lands are taking. Jeremiah – who nearly died of pneumonia before the family left town and is basically a coat filled with loose bones by this point – asthmatic Reuben, and the irrepressibly cute, implausibly wise, and dutifully attentive Swede spend the entire middle section of the novel moving painfully slowly through the bleak winter landscape of Minnesota and the Dakotas.

At times this book is so bleak that it reminds me of Cormac McCarthy’s The Road. There’s no nuclear winter in this novel, and no one actually cooks and eats a human baby – but other than that, this is very much a novel in which a father’s devotion to his children (and his children’s devotion to him) is tested in almost every possible way. The Lands face ongoing near-starvation, temperatures far below freezing, the stress of being pursued and hunted, the fear and worry for Davy’s safety, and the hopelessness of trying to find a single young man in an entire wasteland of snow and ice.

More than halfway through the novel, the book’s only truly compelling characters make their appearances. The Lands’ car – which is pulling the Airstream trailer – runs out of gas (so much for the loaves and fishes) in front of a house that has a boarded-up service station in front of it, and Jeremiah knocks on the door to see if someone is home who can sell him some gas. The person who answers the door is Roxanna, yet another strange, alienated character whom life has beaten into semi-seclusion. Reuben initially describes Roxanna as ugly, but when she takes the family in, gives them some gas, cooks for them, and lets them spend the night, he slowly, detail by detail, begins to see her as beautiful – and this transformation (which Enger handles in a way that almost approaches magic realism) is well done. It becomes clear early on that Jeremiah is going to fall in love with Roxanna, which he does, and they get married – but not until later.

Early in the Lands’ stay at Roxanna’s, a storm passes through and dumps several feet of snow across the region. Once trails have been plowed into the snow, Reuben is able to move around Roxanna’s property unseen, because he is shorter than the tops of the piles of plowed snow. One day when he is out, he sees a man on horseback watching him from a distance, and he moves closer to find that the man is Davy (again, not the most plausible move – I can’t help wondering if Enger decided to give Jeremiah Land the ability to perform miracles only because he needed some way to legitimize the novel’s outlandishly implausible plot). Davy takes Reuben to a cabin in the woods, where he has been living with a man named Jape Waltzer and a young girl, Sara, whom Waltzer has purchased and intends to marry as soon as she comes of age. You know – like you do.

You can call me a superficial philistine of a reader who can’t grasp the subtleties of an interior plot, but I don’t mind admitting that Jape Waltzer is the best thing about this book. He reminds me of a character from Lost who got – well, lost – and ended up in Peace Like a River. He could be Ben Linus’s weirder, creepier older brother. Also like the characters in Lost, Jape Waltzer’s weirdness is never really explained. All we know is that he is solitary and weird and believes that some kind of fundamental change is about to happen in the world – “I live here because it is a cheap safe place to wait for the world to change” (227), he says – and that he takes Davy in because he is happy to take any opportunity to defy the legal system. The only thing missing is the ‘Don’t Tread on Me’ flag from the wall of his cabin.

Waltzer is the most fascinating element of the novel, but he is hardly a hero or savior. He bullies Reuben, scaring him on purpose (although he does seem affectionate toward him at times), and let’s not forget the girl that he plans to marry, whom he treats like a servant (at one characteristically odd moment, the girl accidentally steps on the tail of a pig named Emil who lives with them. Waltzer berates her for this act of thoughtlessness in front of Reuben and Davy. And then, the next time Reuben visits them for dinner, Emil is the main dish). There is something in Waltzer that is rounded and human and able to force the reader to take him on his own terms, which I can’t say is true about the rest of the characters in this novel.

I acknowledge that this novel is a well-crafted work of art. As a morality tale in which a child learns that the world is not fair, it is neither the best (To Kill a Mockingbird, Bless Me Ultima, and Montana 1948 are better) nor the worst (Wingshooters is worse) I’ve read in recent years. Enger is a master at crafting lyrical, mysterious sentences, and I’ll be on the lookout for his work in the future – although I don’t think I’ll buy another book of his without reading the first few chapters in the bookstore to see if I find them compelling. But if you are more patient than I am about what Jill calls “beautiful nonsense,” then by all means, check it out.