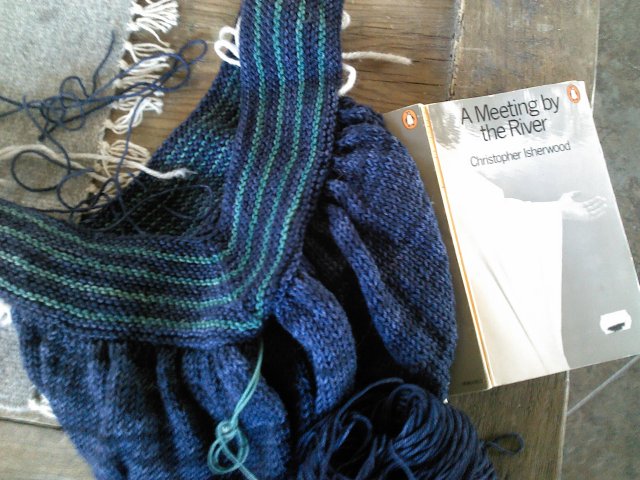 Once again, I’m working on a tank sweater that was commissioned by my friend Dawn. The picture looks a lot like last week’s, but I’ve actually completed about six inches more since I took that photo. Now that I’ve finished the neckline and the process of picking up stitches around the neckline to form the gathering in the front of the tank  (I had to rip it out three times before I got it right!), the rest of the sweater is like a long drive through Kansas: just a lot of repetitive knitting on circular needles. But I have no complaints: the midnight blue merino wool is so much fun to work with, and I love seeing the way what used to be a heap of yarn in my lap turning into a recognizable (almost) finished product.

The book in the photo is A Meeting by the River by Christopher Isherwood. I bought it when Jill and I went to Green Apple Books in San Francisco a couple of weeks ago. I’ve known for years and years that I would probably like Isherwood’s work, but up until yesterday I don’t think I had read a single word he had written, ever. This short novel is told in the epistolary form. Sometimes epistolary novels bug me, but this one is quite good. It helps that the characters are all lying to one another in their letters. Maybe that’s a rule of sorts about epistolary fiction: if the characters are all telling the truth, an epistolary novel is a snooze.

Here’s the rundown: Patrick and Oliver are brothers. They grew up in England, where their mother still lives and where Patrick lives with his wife and children. Oliver lives in a monastery in India, where is is about to take his final vows as a Hindu monk (N.B. the Hinduism in this novel seems an awful lot like Buddhism to me. I am no expert – like any red-blooded American, I got my training in eastern spirituality from J.D. Salinger, with a little of the Beatles thrown in for variety – and I would like to assume that Isherwood did his research, but I’m just saying. There are no references to reincarnation but lots to non-attachment, no references to multiple gods and goddesses but lots to meditation that leads to something similar to enlightenment [though this exact word is never mentioned]. Again – I could be wrong).

Oliver has been estranged from the family for six years before he contacts his brother to let him know that he is making his final vows as a monk. This sets off a flurry of letters from Patrick to his mother, his wife, and his American lover, Tom. Oliver is troubled by the fact that he still feels so much anger toward his brother, so he assigns himself, as a spiritual exercise, to write a journal exploring his feelings, and we get to read these journal entries too. Then Patrick visits Oliver in Calcutta, where Oliver starts snooping on Patrick’s letters, and then it’s more lies, more lies, and more lies. And it’s totally well written and compelling.

Have you forgotten yet that this post was supposed to be about yarn? As a reminder, I invite you to visit Ginny’s blog, Small Things, where Yarn Along is hosted every Wednesday.

This entry was posted in Yarn Along. Bookmark the permalink.

1 Response to Yarn Along