A Review of Tobias Wolff’s The Barracks Thief 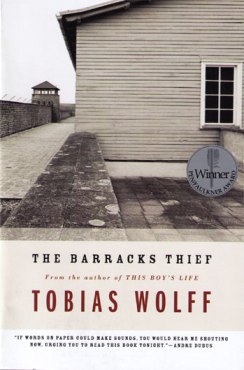 I’ll say it so you don’t have to: I broke out the short books this weekend. I was feeling bummed that the list of books I’ve read so far this year is so short and that I hardly ever finish books anymore. So I slammed my way through How to Get Filthy Rich in Rising Asia, finished A Room of One’s Own at long last, and then picked up The Barracks Thief because it was short and because there was a good chance it would be good (and it was, with a couple of qualifications) and because it has been sitting on my shelf unread since sometime in the month or two after the movie adaptation of This Boy’s Life came out in 1993, when I – along with much of the reading public – figured out who Tobias Wolff was. And another reason was this: Woolf and Wolff. Have you ever noticed how many famous writers have variations of this name – and that they all spell it differently? I never really thought about it until last year when I was cataloging all of my books in an Excel document. You will be pleased to know that I own 25 books by authors named Wolfe, Wolf, Woolf, Wolff, and Wulff. And – as always – I am a little behind on reading them.

Part coming-of-age narrative, part morality tale, and part dress rehearsal for the stories and novels Wolff would write later in his career, this novella is the story of Philip Bishop. Philip and his mother and brother are abandoned by Philip’s father, Guy, when Philip and his brother are in high school. The first chapter – oddly – is told in third person from Guy Bishop’s point of view, and we read of Guy’s inability to settle in any one place, of his seemingly inescapable need to have affairs, and of the peace he feels when he watches his sons sleep. It seems as if the novella is going to be about Guy Bishop. Chapter Two, however, is told in the first person, from Philip’s point of view. Philip is in the army by this point: at jump school at Fort Benning. His mother calls him to report that his younger brother has run away from home and begs him to ask for an emergency leave and come home to look for his brother. Philip refuses, insisting to his mother that the army probably wouldn’t give him leave while admitting to himself that the main reason he refuses to go is that he doesn’t want to have to start jump school all over again when he returns.

After jump school, Philip is assigned to an airborne unit that expects to be sent to Vietnam soon. He and two other men – Hubbard and Lewis – are the newbies in the group and are given the undesirable assignment of guarding an ammunition dump in the middle of the woods while the rest of the unit is given the day off for the Fourth of July. Hubbard is established as a kind, decent guy who feels his recruiter tricked him into enlisting. Lewis is more of a braggart who regales the others with stories of his sexual conquests and boasts about his hometown of Lawton, Kentucky. Lewis is also established as a man who can’t handle insults to his pride. He becomes angry and dangerous when his virility is challenged. Hold on to that thought.

This novella has two parts, not including the weird first chapter from the perspective of Bishop’s father. The first part is the night these three men spent at the ammunition dump, when a local police officer tells them they should leave because a nearby forest fire could ignite the ammunition and cause a huge explosion. A little while after the police officer leaves, a group of antiwar protestors challenge the three men, probing their consciences in hope of inciting them to speak out against the army and the government. In the face of both of these adversaries, the three men dig in their heels. They refuse to speak against the war, and they refuse to take the police officer’s advice – which they admit to themselves is sound – because it comes from a civilian and not from their own superiors.

The second part of the novella begins when first one man, and later another, reports his wallet missing from the barracks. The predictable things happen, all of which may feel more cliché to me than they would to you, unless you have also been a dorm parent for ten years. This part of the novella didn’t interest me as much as the first part, but there are the obligatory speeches about teamwork and the importance of trust, and then there is the obligatory shower room scene. There is always an obligatory shower room scene.

But then the point of view shifts again. Chapter Five is told from Lewis’ point of view, and Lewis is the thief. Over the course of the day described in this chapter, we become aware of just how incendiary he is as a person. Lewis is like the ammunition dump: one spark could send him up in a blaze of heat and violence.

I suppose it was helpful to know all of this about Lewis. But the point of view shifts felt unnecessary to me. Worse, I couldn’t help but feel that Wolff was cheating a little bit. I know, there are no “rules” when it comes to point of view. Books and stories can be told from the point of view of dogs, deities, inanimate objects. The fact that the novella starts in Guy Bishop’s point of view and then drifts to Philip’s and then to Lewis’ and then back to Philip’s would be fine – if it worked. But I don’t think it does.

Ultimately this is a novella about Philip’s failure to take responsibility. An abandoned son himself, he abdicates responsibility for his younger brother (in a scene that contains the echoes of Wolff’s later story “The Rich Brother”) and fails to step up and insist to Hubbard and Lewis that they evacuate the woods as advised, even though we know from the first-person narration that he knows the police officer is right. It seems as if Philip’s enlistment – the choice to wear a uniform, a mask that suggests responsibility when thousands of other young men his age, including his brother, were leaving the country, burning draft cards, and going to prison – is a disguise meant to distract others from the fact that he has essentially abdicated from his family. Because this is the conflict at the heart of the story, I don’t mind too much that the first chapter focuses on Guy Bishop. We need to know Guy’s failures before we can understand the reasons behind Philip’s. But the LONG chapter from Lewis’ point of view – with all the anger and prostitutes and lionization of everything related to Lawton, Kentucky – is just unnecessary.

Sometimes imperfect books are more fun to read than perfect – or nearly perfect – ones. I liked the youthful energy of this novella. Overall it’s a good read. I wanted the tension ratcheted up for Philip, and it seems to me that the fact that Chapter 5 gives us a lengthy break from Philip’s point of view relieves that tension instead of heightening it. But the book is still good. I recommend it – although I recommend Wolff’s short stories and his later novel Old School – quite a bit more.

This entry was posted in Authors, Fiction - general, Reviews by Bethany, Tobias Wolff. Bookmark the permalink.