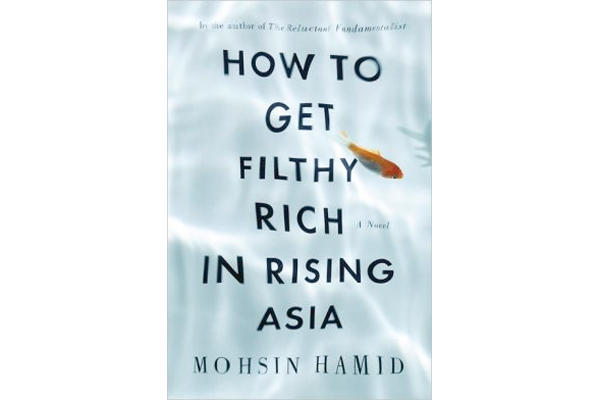 My first undergrad creative writing professor told us never to write ‘bathtub stories.’ A bathtub story, she said, was a story in which the protagonist is in some kind of static location – like a bathtub – recollecting all the events that make up the plot of the story. I knew Wordsworth’s definition of poetry then, I think (“poetry is a spontaneous overflow of powerful emotion reflected upon in tranquility”), but it didn’t occur to me that Wordsworth’s famous statement essentially described a bathtub story. Maybe I was too busy being personally affronted by the professor’s admonition to make the connection with Wordsworth. I was nineteen. Pretty much everything I wrote was a bathtub story. Pretty much everything all nineteen year-olds write is a bathtub story.

I read Mohsin Hamid’s The Reluctant Fundamentalist sometime last spring, during the Era of Not Blogging. I didn’t really have much to say about it. When How to Get Filthy Rich in Rising Asia came out, I was intrigued but decided that I was in no hurry to read it. This policy suited me fine until about a week ago, when I saw it in the library and checked it out on impulse.

The Reluctant Fundamentalist is a bathtub story in the sense that its plot is essentially over when the story begins, and the protagonist is sitting in a café corralling any Westerners he sees to sit down with him and listen to him, à la the Ancient Mariner. The essential structure of any bathtub story is this: 1) Zoom in on the protagonist, about whom there should be some notable quality (missing leg, embarrassing tattoo, virulent misogyny, etc.); 2) the narrator (which is usually first person, but not necessarily always) begins telling the reader and/or some other character who serves as a stand-in for the reader the story of how he or she developed the notable quality. Heart of Darkness is a bathtub story, if you exchange the bathtub for a yacht, and I think Lord Jim might be one as well, though I can’t remember exactly where Marlow is when he tells that story. All I remember about Lord Jim is the guano island. And also the guy who kept screaming about pink toads.

And that’s pretty much it. A bathtub story is a monologue and not much more, although some authors do a better job than others of helping the reader to forget about the form. But if you film any of these stories and remain true to the author’s original, all you’ll film will be a guy talking. And who really has any use for talking guys?

How to Get Filthy Rich in Rising Asia is another bathtub story, though structured in a way that is innovative if not effective. The title sounds like the name of a self-help book, right? That’s the structure. Hamid wants us to believe that the book in our hands is somehow a self-help book called How to Get Filthy Rich in Rising Asia AND a novel about an unnamed person who is intended to serve as a sort of Pakistani Everyman. This is one of those rare novels told in the second person. The narrative voice (which is the omniscient voice of the self-help book) is speaking to “you,” a nameless, faceless figure who enacts the process of becoming filthy rich in rising Asia.

I admire innovation even when I don’t enjoy it. I think that human beings should always be trying to do things in new ways, and I appreciate the fact that Hamid has reworked the bathtub story into something entirely new. I appreciate it, but I didn’t enjoy the book much. I want to read about characters. I want to know their names and their family members’ names and the names of their elementary school teachers and love interests and the child molester who lives by the train tracks. I want to feel that the actions of the characters mean something – that their lives are not predetermined by self-help books or by any other factor besides their own choices and the choices of others in their lives. I do know that Mohsin Hamid is well aware that many of his readers will have this bias. Although Hamid lives in Pakistan, he writes in English, and I think he knew well when he wrote this book that he would come up against this kind of opposition: against a whole army of readers saying Can’t this PLEASE be more like a Dickens novel? Can’t there PLEASE be someone locked up with a moldy wedding cake, or someone with a moat around his house, or someone who is constantly knitting? It’s a little alarming, I think, the degree to which we rely on visual characterization. My grad school professors were always saying, “Film it. If you can’t film it, there’s no story.”

And there is story here, I know. Given the device he constructed for this story, Hamid has done a fairly good job of creating a protagonist (albeit one with an imaginary bag over his head) and a series of conflicts and a love interest. The “you” of the novel is born in the country, and the first chapter of the novel is called ‘Move to the City.’ This chapter traces the protagonist’s journey to the city with his father, mother, sister, and brother and their struggle to survive there in substandard housing. The protagonist goes to school, and he is aware from the beginning that his schooling – though appalling by my standards – has already started to separate him from the rest of his family: “When the show is done, the credits roll. Your mother sees a meaningless stream of hieroglyphs. Your father and sister make out an occasional number, your brother that and an occasional word. For you alone does this part of the programming make sense. You understand it reveals who is responsible for what” (33).

Each of the twelve chapters in this novel focuses on a single hypothetical instruction: ‘Don’t Fall in Love,” “Avoid Idealists,” “Work for Yourself,” “Befriend a Bureaucrat,” “Dance with Debt,” etc. Between each two chapters, we jump ahead in time. The young protagonist reappears as a late-night delivery boy trying to stay awake during the day in order to finish school; as the would-be suitor of “the pretty girl” (the only name she is given), a girl whose beauty will propel her out of the slums but not all the way out of the protagonist’s life; as a salesman working for a corrupt boss; as an entrepreneur starting up his own bottled water business; as an aging tycoon, wealthy and miserable, his family long dead or moved away. The protagonist never came alive for me, never seemed rounded and dynamic enough for me to sympathize with, and I realize that on some level Hamid has undoubtedly done this intentionally. He doesn’t want to go easy on his reader. He may have anticipated that his Western audience wanted another Slumdog Millionaire, another novel like Rohinton Mistry’s A Fine Balance or Khaled Hosseini’s The Kite Runner, and it may be that Hamid thought that route a bit too easy. Many Western readers, liberal in sentiment, pride themselves on how many books they have read about the non-Western world, and maybe Hamid wanted these readers to find his protagonist hard to reach. This person is different from you in critical ways, Hamid may be saying to his readers. I’m not going to let you get too close. There are barriers between your world and his that you will never, ever cross.

And maybe I am imagining all of this. I don’t know Hamid personally, nor have I read a single article or interview of his – nothing except The Reluctant Fundamentalist and How to Get Filthy Rich in Rising Asia. I don’t know what kind of relationship he has or wants to have with his readers. I do think, though, that on some level I fell right into his trap. When I felt annoyed at the novel, I sensed Hamid around the next corner laughing at me. Could it be that he understands me more than I understand his protagonist? That’s not how the reader-writer-character dynamic is supposed to work; his protagonist should be fully fleshed out with details, and I should be the stereotype: late 30’s, single, educated, moderate politics, no religion to speak of, no children, two cats. Has Hamid somehow gotten into the machinery (what do you mean, what machinery? THE MACHINERY.) and monkeyed with the basic realities that govern reading? All by writing in the second person and not telling us the damn guy’s name?

This entry was posted in Authors, Fiction - general, Mohsin Hamid, Reviews by Bethany. Bookmark the permalink.