Requiem for a Hard Drive, and also my long-awaited review of Kim Harrison’s Ever After

I will not deny that I’m a pretty clumsy person.  I once fell in the shower and broke my finger.  I once fell in the shower and gave myself a giant bruise on my inner thigh.  Last week in Yosemite I fell on the way down from the top of Upper Yosemite Falls and skinned my knee and bruised my chin.  I once rode my bike into a ditch.  I routinely stab myself with needles at work.  I can’t catch anything, even if it’s thrown directly at my head.  I’m always amazed if I try to toss something in a garbage can and it actually goes in.  But there are some things I don’t do—I don’t break electronics.  Often.  The last time I broke anything was in 2005 when I spilled water on my laptop two nights before my National Boards and fried the motherboard.  It was annoying.  But the people I took it to were able to harvest most of my data (which was not much besides old school work) and my mom bought me a new laptop.  It was fine.  Not cause for tears or angst.  On Saturday, my husband dropped my laptop and broke the hard drive, and as of yet nothing has been retrievable.  There have been a lot of tears and angst since Saturday.  I am absolutely devastated that my stupid computer broke.  And my husband is going to shell out as much money as he has to to retrieve our digital life.  What’s the difference this time?  Do you realize how much has changed since 2005?  I hadn’t until this happened.  In 2005, we took our film to Long’s to have it developed.  And pictures were something that happened on special occasions or occasionally when the cats did something cute.  Now, I take pictures every day.  And I take them on my phone.  In 2005 it was a big deal when I got a cell phone with a color screen.  Now my phone has a better resolution camera than my first digital camera did and cost less than half what that camera cost.  I am online every night.  My laptop sits on my lap most of the time I’m at home on the couch.  And all my pictures are gone.  My Christmas card list is gone.  (BTW, if you read this and we usually send you a New Year’s card, can you please email me your address?)  I had to re-enter all my bill reminders on my calendar.  I don’t even want to discuss how I’m probably going to have to re-upload all my CD’s (remember those?) to my laptop again.  Fortunately, I haven’t bought an actual CD in over three years, so maybe that’s not such a rush.  The list goes on.  It fascinates me how dependent we have become on the matrix in the past nine years.  I don’t think much about it.  Thank god I haven’t given up on real books.  There are advantages to not keeping everything in a single compact spot.  Sure my books take up a heck of a lot more space than a Kindle, but I am pretty sure my books won’t be unreadable if I drop them on the floor.  This whole episode makes me nostalgic for the days of address books and photo albums….

And now….  What you all really came here for.  My review of Kim Harrison’s 2013 Hollows novel, Ever After. 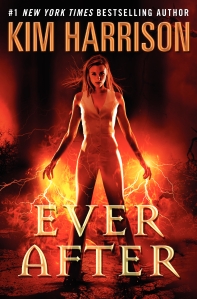 This book came out last January, while I was reading something of very high literary merit, like The Portrait of a Lady.  I figured I’d get to it soon enough, never dreaming that it would be over a year before I got to it.  Ultimately I’m glad that I waited because it gave me the opportunity to “marathon” a few books in this wonderful fantasy/horror series.  Some series are less enjoyable the more you read of them in a row, but I marathoned the first seven books in this series back in 2010 and they got better the more I read.  This is still the case.  I know I’ve gushed about The Hollows more than you guys want to read about, but I just love this series so much.  The thirteenth and final book in the series will come out next year and it makes me sad.  Unlike last year when I read the last Sookie Stackhouse book and I was relieved that I would never feel compelled to read another word written by Charlaine Harris, I’m looking forward to what comes next from Kim Harrison.  She has gotten better, her world has gotten richer.

But the point was to update you guys on The Hollows.  Ever After spends most of its time with the demons and the elves, which was actually fine with me.  Ivy was absent most of the time, which was also fine with me.  When the vampire characters turn back up in the last third of the book, albeit in a very limited fashion, I was bored and annoyed.  I wanted to get back to the demons!  They were much more interesting than vampires trying to scare each other with their bloodlust.

The big bad in this book is Ku’Sox Sha-Ku’Ru, a crazy demon who Trent Kalamack accidentally released from his prison beneath that giant arch thing in St. Louis back in Pale Demon.  I don’t remember all of that very well, so I’m not going to comment on Ku’Sox’s prior activities, but he’s pretty nuts.  Rachel created a ley line at some point in the past few books and she realized it was causing a small “leak” in the ever after, so this was causing the ever after to shrink, but at a very slow rate.  Ku’Sox somehow damaged Rachel’s line so it started leaking much, much faster, causing all of the demons to notice.  Rachel gets stuck with the job of fixing her line, even though it isn’t her fault, because all of the demons are scared to cross Ku’Sox (demons are wimps).  The punishment if she isn’t able to fix it is death.  Being under a death sentence is no big deal to Rachel, but she still wants to stay alive.  She and Al go to her line, try to fix it, and Al is badly hurt.  Then Ku’Sox kidnaps Trent’s daughter Lucy and Ceri.  And Rosewood babies are disappearing.  This book has a bit for everyone: visits from characters we haven’t seen in a while, tragedy, laughter, action, history of the Hollows, fancy magic.  I don’t want to spoil it, so I’m going to leave it at that.

There are a few awesome fight scenes in this book, and good character development for Rachel and Trent.  The chemistry between those two is freaking palpable and the only thing that happened between them was one stinking kiss.  Kim Harrison knows how to build tension of many kinds.

I really enjoyed learning more about the distant past and the war between the elves and the demons.  Apparently demons used to be the slaves of elves, and they had these cool srings that allowed demons and elves to share power, both as equals (wedding bands) and as master and servant (slave rings, or slavers).  Al, Trent, and Rachel use these rings to finally best Ku’Sox, and it was amazing to read.  It was cool to see Trent and Rachel use wild elven magic, too—that stuff is crazy.

Just so I don’t make this the least critical review ever, I wanted to mention a couple of Harrison’s writing “tics” that seem to be getting more pronounced as the series goes on.  She uses the word “spill” a lot.  And not in reference to liquids coming out of containers.  I actually made a bet with myself when I was reading the book that when the time came to write my review I’d just open it to a random page and look for an example of Kim’s overuse of “spill.”  I thought I’d be able to find one pretty quickly.  Turns out, not so much.  I just looked through about twenty pages and either I missed seeing the word in my quick skimming, or it’s a bit less common than I thought.  I really should have marked a couple.  An approximate example is “warm springtime air spilled in through the open window.”  Or, “her hair spilled down her shoulders.”  I assume it’s an attempt to make things vaguely sexual, and it kinda works, but after a while I got annoyed.  Oooh!  I found one.  “I stiffened as the energy spilled up through me, shaking off the smut of the curses around it and shining with a dull gleam in my mind (419).”   Here’s another one!  “Let a thin ribbon of [your aura] spill down into your hand (173).”  Also, Harrison makes what I perceive to be weird use of prepositional phrases.  I should also have marked a few of these.  Much as these two idiosyncrasies grated on me (and I’m sure they really will be by the time I get to the end of The Undead Pool in the next week or so), it was kind of cool to be like, “Oh, there she goes again with her unique turns of phrase.”  It kind of makes me happy to know a writer’s style well enough to pick out things like this.

So, here’s the deal, gang.  I want to read The Undead Pool now.  I’m going to call it quits.  Everyone who enjoys, or might enjoy, urban fantasy needs to read these books.  I loved Ever After, and I hope that the last two books in the series live up to the first eleven.  I am almost positive that they will.

3 Responses to Requiem for a Hard Drive, and also my long-awaited review of Kim Harrison’s Ever After