Thoughts on Richard Hugo’s “To Women” 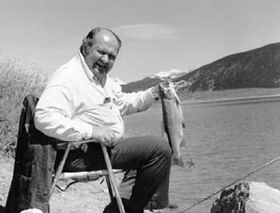 Richard Hugo’s poem “To Women” was included in the Norton Anthology that we used as a poetry text in A.P. English. We weren’t assigned to read this poem, but I found it anyway when I was flipping through the book to kill time. It alarmed me. As I’ve mentioned earlier, by the time I read this poem, I had been exposed to feminism that was militant and even hostile. I don’t remember if I ever questioned how men might feel about women burning bras and demanding equal rights; if I thought about it, I probably thought they resented it. I think I saw my society’s changing relationship with gender as an abstract version of the Super Bowl: there were two sides locked in mortal combat against each other, and everyone with a brain was expected to pick a side and cheer.

This poem changed that attitude – possibly singlehandedly. There is something wonderful about leafing through a poetry textbook, reading the poems your teacher didn’t assign. I felt I was discovering something entirely new. I had never heard of Richard Hugo – for all I knew, he was the series editor’s nephew – though within a few years he would be established in stone as my favorite poet. He still is, I think, except that he now shares that title with Philip Larkin. His Collected Poems, called Making Certain it Goes On, was the first book I ever bought from Amazon when it opened in 1997. Today, that copy is structurally sound though quite battered, and it’s an absolute treasure trove of weirdness and marginalia: slips of paper stuck here and there as bookmarks with drafts of poems scribbled on them, a name tag that reads “Stuttgart Junior High VISITOR” with my name inked below. A third grader in a Writers in the Schools workshop raised her hand once and asked, “Wait – is it the First Baptist Church and the Mid-South Bank, or is it the Mid-South Church and the First Baptist Bank? I can never keep those straight.” I jotted the anecdote on the title page of Making Certain it Goes On.

This poem begins, I suppose, by apologizing to women. The first two stanzas are written in the first person plural, so presumably the speaker is representing men in general. “We have misused you, / Invested you with primal sin. You bleed / For our regret we are not more,” the speaker states, almost as if part of some kind of expiation ritual: a binding of Isaac, a Last Supper. This is the part of the poem that didn’t surprise me much, since what the speaker is doing here, essentially, is choosing sides. And I assumed that choosing sides was what feminism was all about.

The second stanza knocks the wind out of the first by making clear that the speaker’s claim (or apparent claim) to speak for all men is false. No one can speak for all men or all women. Hugo’s use of the one-word sentence “Whatever” here is brilliant. “Whatever” itself is a broad, sweeping term – it can include anything in the universe – yet we use it most often to be dismissive.

You have the right to veer off flaming

In a new direction, mud flat and diamond mine,

Clavicord* and dead drum. Whatever.

It’s a new game every time, one on one.

*A note on “clavicord”: Microsoft Word tells me this word is misspelled. I’m retaining Hugo’s spelling, though I have a feeling MS Word is probably correct. I don’t know exactly what the “clavicord” and the diamond mine and the mud flat are all about, exactly, but I like the mystery of these images placed here together. I don’t know what a “dead drum” is either, but I did go diamond mining once. It was in Arkansas. I didn’t find any diamonds.

This stanza was enormously important in shaping my ideas about gender. Those last two lines – holy crap. They’re about the fact that individuals and society in general can’t be measured with the same yardstick. Society changes; time passes. It becomes unacceptable to refer to grown women as “girls,” to make sexual advances in the workplace, to pay women less than men, to exclude women from professions like medicine and law. But this larger social trend, which plays itself out over many decades, does not change the fact that individual human beings continue to be born during these decades, and these human beings have to face the questions that human beings have always had to face. A boy grows and recognizes one day that he is taller than his mother, his sisters, the female teachers at school. He’s stronger too. He has to figure out what this means. He has an advantage. No matter how progressive the lessons his society has taught him, the time is going to come when he will be angry at one of these women, or – possibly worse – feel ashamed in her presence, for something that may or may not be her fault. What will he do? Will he cry? Will he attack, seizing the advantage of size that he was given without asking for it? If so, how will that feel? Will it make him want to do it again sometime? Will the feeling it gives him be a hard one to leave behind? We are part of a society, but we experience the world as individuals, and societal trends are essentially abstractions. We can study abstractions, but they don’t determine our gut reactions. No societal trend will ever overpower the fact that the essence of human life is this: We have bodies. We step out into the world in these bodies, and we see what happens.

The poem’s third stanza – in which the speaker shifts to the first person singular, speaking for himself only instead of for all men – astonished me even more. It says,

When I imagine some good woman young

I no longer imagine her cringing

beating corn leaves aside with a club.

That is release you never expected

From a past you never knew you had.

The speaker is an individual here, but the “you” that refers to women still addresses the entire gender. This would be a different poem if it were written in French or Spanish or German or any other language that uses different words for the singular “you” and the plural “you.” Because the language of this stanza is so specific and so striking, it’s easy to be tricked into thinking the “you” here refers to the singular – that the speaker is addressing some specific woman he knows, a woman who hid in the cornfield from the cruel father like Jenny in that maudlin scene at the beginning of Forrest Gump. But it doesn’t: the “you” refers to “some good woman.” The cruel father, then, is symbolic, not necessarily of all men, but of a subset of all men, the subset that likes the feeling of flexing his muscles, who is a little bit addicted to rage and power, who will always choose to scare or belittle if his only other choice is to be scaredor to be belittled. In some ways, the cruel father is the new locus for the “we” of the poem’s first two stanzas; he has become the generic male. There’s something almost Jungian about the images in this stanza, as if the girl in the cornfield and the cruel father with the club are part of the universal subconscious, part of some mythical story that appears and reappears in every ancient tradition.

And then there are those chilling last lines – not quite the last lines of the poem, though they might as well be. “This is release you never expected / From a past you never knew you had.” These lines mirror the statement Hugo makes about men at the end of the second stanza: “Please know our need remains the same. / It’s a new game every time, one on one.” The purpose of these lines in Stanza 2 is to remind the reader (as well as the speaker) that our identity as individuals matters more than our identity as part of a society; the purpose of the lines in Stanza 3 is to backpedal and suggest that we also owe a debt to the past, to the people who have lived lives similar to our own, but in harder, crueler times. It’s worth asking whether gender matters here: the lines in stanza 2 refer to men, while those in stanza 3 refer to women. Does Hugo mean to suggest that men are individuals but that women are something more – metaphors or symbols or representations of all the women who have come before them? I want to say no, but then I remembered the last sentence of the poem: “You are free.” The singular “I,” the male, ends the poem by setting free the collective “you.”

While this poem intrigued me from the first time I read it, I was also troubled by its ending, which made me feel that I was somehow supposed to feel grateful to men – grateful, I guess, for having finally come around, for banding together – all however-many billions of them – and said, “Oh, all right – you can vote! You want to me doctors, to be astronauts, to be Marines? Go ahead! That day in the cornfield, with the club – you didn’t think I actually meant any of that violence, did you?”

The tension between the “I” and the “we” in the speaker’s voice – and the corresponding lack of tension in the women for whom the poem is written – is what makes the poem so complex. This is a poem of abdication. First the speaker abdicates responsibility for the behavior of his fellow males; later, it admits its own inability to summon the energy or power to take up the freedom that it has freely offered to women. “My horse is not sure he can make it / to the next star,” the poem said, just before its final “You are free.” The speaker of this poem is exhausted. He passes a baton of some kind to women (hence the title), and then – well, and then I think he dies. There’s nothing in the poem to indicate for sure that its speaker is moving toward death, but the “you” in the last line feels exclusive to me: “You are free” seems to contain within it the opposite statement, “I am not free.”

This poem astonishes and puzzles me as much today as it did in A.P. English. I wish we had studied it back then – I would love to have heard what Fr. Murphy had to say about it. If I hadn’t decided to play along in the Classics Club’s Feminist Literature challenge this month, who knows when I would have remembered this poem, pulled it out, and allowed myself to be challenged and shaped by it again?