Thoughts on E.L. Konigsburg’s A Proud Taste for Scarlet and Miniver 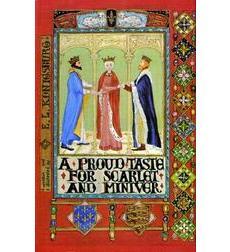 I read A Proud Taste for Scarlet and Miniver (otherwise known on my to-do list as A Proud Taste for S&M) last summer when I was trying to give myself an introductory course in what’s been published in the world of Middle-Grades and Young Adult fiction since I left those sorts of books behind in the eighth grade or so. I remember liking Konigsburg’s much-earlier novel From the Mixed-Up Files of Mrs. Basil E. Frankweiler quite a lot when I was in the fourth grade or so, and this book came highly recommended for seventh and eighth graders, many of whom I was tutoring at the time. In fact, I found this book listed on the curriculum page on the website for the K-8 school that I went to, and since I got a great education there, I thought the book was probably worth reading.

I guess it is worth reading, but I was disappointed anyway, for complicated reasons. The novel tells the story of Eleanor of Aquitaine’s life as narrated by Eleanor herself (making this the second novel I read last summer that is narrated by a dead queen) from heaven. The idea is that Eleanor’s erstwhile husband, King Henry II of England, is being released from Purgatory and brought to heaven to be judged. Eleanor is hanging out in heaven with Henry’s mother, Queen Matilda, and various other incorporeal souls, killing time until Henry arrives. Eleanor is bored: “Even after more than five hundred years in Heaven, Eleanor of Aquitaine still missed quarreling and dressing up. Eleanor missed strong, sweet smells. Eleanor missed feeling hot and being cold. Eleanor missed Henry. She missed life” (4). She looks forward to bringing Henry up to date on the goings-on on earth, since in this version of the afterlife, souls in heaven can watch people on earth, but souls in Purgatory cannot (in spite of the fact that here in OUR Purgatory, we watch people on earth all the time. That’s pretty much all we do. Well, besides reading.)

As a young adult novel that brings with it a tidy little lesson in history, this book is fine. I have no complaints about it. A reader in the 12-14-year-old demographic who hasn’t had much of a background in medieval history will learn a few facts – names and dates and events that perhaps with intrigue her and therefore stick around until such time when she does have a decent class in medieval history. The story is light and amusing, without shying away from the fact that Eleanor both embodied the feminine ideal of the Middle Ages (and even helped to shape it, through her patronage of Sir Thomas Malory) while simultaneously being thwarted and restrained by the powerlessness of medieval women. Fine. But no complaints are not the same thing as praise. Here’s the problem:

I remember well when I learned about Eleanor of Aquitaine. It was seventh grade history class at the same school that now assigns this watered-down novel in its English curriculum. My teacher was an arch-feminist, socialist-leaning, five-foot-tall dynamo who moved through her classroom like the Tasmanian Devil. A few years later, when I read The World According to Garp, she was my model for Jenny Fields, and she even looked a little bit like Glenn Close in the movie adaptation of that novel – though she was less glamorous than the Hollywood star (but aren’t we all). If the greatest compliment I can pay a teacher is the fact that she has remained with me throughout my entire life, then this teacher is the best one I have ever had – tied with the greats from my grad school years and even a tiny, tiny bit better than Fr. Murphy (but he shouldn’t be offended – he was up against tough competition). I’ve written about this teacher in this essay on my personal blog, and she plays a role in a short story that I am working on right now. At a recent dinner with some of my classmates from that school, our attitudes toward this teacher were polarized. Some remembered (accurately) that she played favorites, that she assigned too much work, that she talked frequently and openly about her menstrual cycle and her sex life. And it shouldn’t surprise anyone that the two of us who remembered her as a great teacher were two of the ones she liked and validated and praised.

But it was in this class that I felt for the first time the urgency of learning. I raced to keep up with her lectures, filling page after page in my notebook. It was the first time that I felt in my own gut the connective tissue of history – the way the classical Greek and Roman ways of thinking that we had studied in the fifth and sixth grades shifted and merged and morphed into medieval thought, how certain harbingers of intelligence and independence – like Eleanor of Aquitaine, like Peter Abelard and Heloise, like Chaucer and Giordano Bruno and Galileo – came into being, existed simultaneously in their own times and in the very first glimmers of the future. She changed my life, I think. I never studied history formally, aside from the required courses in high school, and at some point between college and today I realized that the reason I never took history courses in college is that I worried I would be disappointed – that no college professor could ever be as good as that seventh grade history teacher, with her loud irreverence and contagious passion.

So that’s why this book made me a little sad. I don’t like to think of smart seventh graders learning history from watered-down novels like this. Who knows – maybe their English teacher filled in some of the gaps and made them love history, and maybe that teacher didn’t also bash men and hate half the class and tack a rubber lobster up on her bulletin board to indicate that she had her period. But, unfortunately, I kind of doubt it. Not enough people take kids seriously these days – and taking students seriously is the one quality that every single teacher I have ever loved has had in common.

1 Response to Thoughts on E.L. Konigsburg’s A Proud Taste for Scarlet and Miniver