In which Jill waxes philosophical about memory, and also talks about Pat Conroy’s The Death of Santini 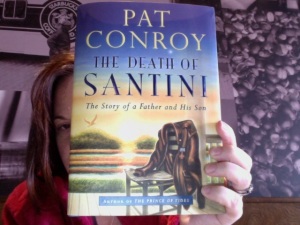 I’ve said it before and I’ll say it again: Pat Conroy should stick with being a memoirist.  I read this book faster than I’ve read anything in a while, for a multitude of reasons, not the least of which is that it’s cold out and I don’t want to be outside.  Okay, it’s cold for Northern California.  [Addendum: I started this post back when it was actually winter in Northern California.  It is now spring.  In January.]  Not cold for anywhere else on the planet.  I wanted to take a minute to wax philosophical about the act of writing.  I don’t profess to be a writer like Bethany is a writer.  Writing has always been something I enjoy doing, but I’ve never really wanted to make a career of it, mostly because after a while it isn’t fun, it’s work.  When we started the blog, writing posts about books was really, really fun.  It was like exercising a muscle I hadn’t remembered I had.  But like all exercising, sometimes your muscles get sore, and I’ve been having a hard time lately coming up with interesting things to say about the books I’ve been reading.  True, I’ve had less time to blog in the past year because of exercising and focusing on fitness, but also the work of writing has been outweighing the fun of writing for me.  I worry about disappointing our legions of followers with a poorly constructed post, or that I’ll say something stupid and Bethany will laugh at me behind my back with her writer friends.  I’ve been thinking about it and in trying to put a more positive spin on this frustration I’ve been feeling, it occurred to me: now I really am a writer/book-blogger.  Because this shit isn’t easy, but I’m continuing to do it, because I love it, even though it’s hard work.  I always say that working in the veterinary field isn’t for the faint of heart.  It is emotionally draining and at times we get all kinds of nastiness on our persons.  There are moments of pure joy, of course, like when a good client gets a new puppy, or when a pet was hospitalized for days and days and gets to go home 100% better.  But there are also hard, sad times.  Compassion fatigue is a very real thing, and 2013 has been the year of having to look it in the eyes and tell it to get out of my way, because I may have lost a lot of patients this year, but there are more that need me and I’m not going to bond any less to them just because I’ve lived through losing others.  So my point, friends, is that I’m going to push through, and keep working, because it’s worth doing.  Because if being a book-blogger was easy, everyone would be doing it.  (I acknowledge that there are actually quite a few book-bloggers, but not nearly as many as there are people who read books.)

But back to Pat and Don Conroy.  I’m really glad I reread The Great Santini this year for Pat Conroy Month, because it was important to have all those details fresh for reading this book.  The Death of Santini is much more than the story of Don Conroy’s death.  It was definitely that, but it also put together the pieces of the Conroy family’s history that Pat has peppered into his novels.  I actually would like to reread The Prince of Tides now, too, but I think I’ll save that one for next September.  The book is divided into three parts, with a general time frame for each, though he jumps around a bit too.  Part one is childhood through the writing, publication, and movie making of The Great Santini.  Part two focuses on Peg Conroy’s family and her death, and also the mental illness of Tom Conroy, the youngest of the seven Conroy kids, and his eventual suicide in 1994.  Part three belongs to Santini, and also to Carol Ann Conroy, the inspiration for Mary Ann Meecham in The Great Santini.  I wish Pat had spent more time with the other Conroy kids (Kathy, Mike, Jim, and Tim), but they play supporting roles only.  Their lives seem, to me, both more and less interesting than those of Peg, Don, Tom, Carol Ann, and Pat.  How did they all turn out relatively “normal” and undamaged?  Perhaps he is saving their stories for his next memoir?

Sitting here in Panera Bread several months after finishing this book, I am having a hard time remembering exactly what all went on within the pages of The Death of Santini.  Feelings I remember.  Pat has this very convoluted and confusing relationship with his entire family.  I am glad my relationship with my immediate family is not as convoluted.  He loves his parents and his siblings and his various wives and daughters, that much is certain.  But there is so much more bubbling along with the love.  Especially with his parents.  There is fear and anger and rancor.  I wonder what Pat’s family would have to say about him, especially the ones who aren’t speaking to him.  Especially Carol Ann.  I would love to hear what she has to say about her brother Pat.

Carol Ann Conroy and Mary Ann Meecham are two halves of the same coin.  Or something like that.  Carol Ann is who Mary Ann grows up to become.  And I wonder how much of her persona in The Death of Santini is truly how she is and how much is Pat and his flair for the dramatic.  For example: “Even as I write these words criticizing Carol Ann, I find myself filling up with apprehension and dread.  Her talismanic powers over me extended into the deepest realms of self.  The Family Crazy has complete control of any family’s hard-earned serenity.  Carol Ann had threatened suicide so many times it became as rote to me as a weather report in South Carolina calling for high temperatures in the summer.  But I write this with pure certainty that Carol Ann will turn these words into the bituminous fire of her anger.  When she reads this, will I get a call that Carol Ann has leaped from a building in New York, set herself on fire, hanged herself in a closet, or cut her wrists until her body is bloodless and accusatory and something I have to live with the rest of my life (p. 217)?”  I want to believe as gospel everything that Pat Conroy says and writes.  But I have a hard time believing that Carol Conroy, a poet and independent woman, spends her whole life being angry at her older brother, waiting for him to write something so she can commit suicide over it.  Perhaps Pat is a bit narcissistic?  Or maybe Carol Ann really is that crazy.  No one else in the Conroy family is talking, so all I have is Pat’s version to go on.

Which brings me to yet another tangent.  What is truth?  What is memory?  Pat talks some in My Losing Season about truth and memory.  I don’t have that book with me, or else I’d try to find a quotation to reference for you guys.  When I was younger, I believed in the permanence and absolute accuracy of my memories.  As I’ve gotten older, this has gotten harder to do.  Take, for example, an argument Bethany and I had about our AP English reading list back when we were first starting the blog.  She was absolutely convinced that we read George Eliot’s The Mill on the Floss for AP English.  I was absolutely convinced that we didn’t.  And I knew that because I remembered reading it for the first time in 2001 when my finger was broken.  Bethany absolutely remembered reading it for AP English.  We had to phone a friend to figure that one out.  Actually, I believe Bethany dug out her AP English syllabus to determine that I was, in fact, correct.  More recently, I was absolutely convinced we read The Great Gatsby in sophomore English.  Bethany insisted it was in junior English. That time she was correct—I looked in my text from junior English and lo and behold, notes all over The Great Gatsby.  I now know that Mr. Grady “taught” me The Great Gatsby, even though I clearly remember Mr. Barmore talking about lovely Daisy Buchanan and the billboard with the eyeglasses.  This also says quite a bit to me about the quality of the teaching that went on in sophomore vs. junior English….  But maybe we’ll talk about that some other time.

And now I want to talk about a day in the lives of your two favorite book-bloggers to wrap up my thoughts on the impermanence of memory (can you tell I’m out of stuff to say about The Death of Santini?).  We have called it The Missing Day for twenty years.  We have called it The Missing Day since the day it happened.  So here is the deal.  Sometime in the Spring of 1994, we had to turn in term papers to Fr. Murphy.  These term papers were to be about specific authors.  I picked Maya Angelou.  Bethany picked John Steinbeck.  Other people picked other authors.  One girl in our class, who shall remain nameless, picked a certain Chilean author who now lives in Marin County.  She interviewed her for her paper and was convinced that she should get a really good grade because she was the smartest of them all (she was pretty shocked when I got a better score than her on my term paper—whatever).  So she got her term paper back at the beginning of class, and saw her score and said, I believe, “What is this shit?”  And then another person was eating in class, which Fr. Murphy was apparently quite annoyed about.  And then another student got up and left in the middle of class.  All this happened on the same day.  But I don’t remember any of it happening.  I have no idea where I was that day.  I may have been in counseling.  I may have been in San Diego visiting colleges.  I may have been abducted by the Borg.  We just don’t know.  I swear I was at lunch shortly after all this nonsense went down because I remember rehashing everything and being shocked that I missed all of it.  Or do I?  Yes, this is all a ploy to finally talk about The Missing Day on the blog.  But this day has been a frequent topic of conversation over the years between Bethany and I because it was the first time in our young lives our memories totally failed us.  And those of you who know one or both of us know that we pride ourselves on our excellent memories.  So if the two of us can’t be relied upon to remember what day it was that Dion was eating, Katie was swearing, Chrissy left, Michelle was looking for Man-Kit and Jill was abducted by the Borg, how can we truly trust anything that Pat Conroy says about Carol Ann?

2 Responses to In which Jill waxes philosophical about memory, and also talks about Pat Conroy’s The Death of Santini