Up until recently, I worked at a chain of tutoring and learning centers in the Bay Area. Modeled on the Asian-style “cram school,” these centers offered one-on-one tutoring,   SAT-, ACT-, and AP-prep classes, and other classes for younger students designed to get them ready for upper-level work. At this job, I found myself in a position that I hadn’t been in for almost a decade: having to teach books that I myself did not choose. One of the courses I taught was a tenth-grade reading class. The first book on the syllabus was The Things They Carried – a book that I have taught many times. The second was Travel as a Political Act, a guidebook disguised as a collection of travel essays. My 24 year-old frat boy boss told me before the course began that Travel as a Political Act was his favorite book. This comment should have tipped me off about a few things.

Apparently Rick Steves is famous for his series of guidebooks and for filming TV specials about travel. I, however, had never heard of him. I took the title literally and assumed that the book would be a collection of travel essays that dealt with the kind of issues that can influence a person’s political stance: immigration, health care, poverty, women’s rights, and that sort of thing. And on one level, that’s what it is. It’s certainly what Rick Steves wants it to be. On another level, though, this book is a time capsule, preserving a certain American way of seeing the world that I think and hope is finally starting to die.

Rick Steves is a yahoo – and I mean that literally, in the Gulliver’s Travels sense of the word. He writes joyfully about deliberately eating in front of Muslims during Ramadan. He complains that mosques smell like dirty feet. He watches women putting their head scarves on before their plane lands in Iran and notices “how striking long hair can be – how it really does grab a man’s attention” (162). He complains fussily about nude beaches in France and health spas in Germany. Every once in a while his sentences get lost, their subjects never finding their verbs. Once he used the word “ancestors” when he really meant “descendants.” Rick Steves is an affable, red-faced, smiling yahoo – the paradigm of the word “avuncular.” His book – which looks more like a guidebook than like a book of essays – is full of photographs, many of which are selfies, like this one: 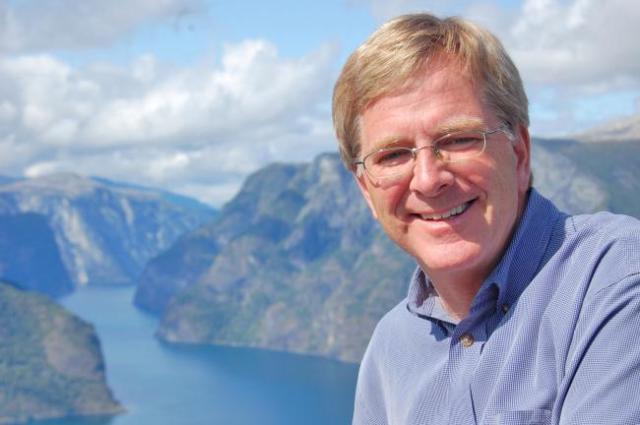 Here’s Rick Steves in the act of taking a selfie:

And here he is taking a selfie while someone holds out a phone in hopes that he will take another selfie:

You get the idea. The author photo on the back cover is a cropped version of this one –  self-satisfied American male whose face is several shades redder than his hand strikes the “thinker” pose with a posse of young women in chadors:

Rick Steves kind of embarrasses me. My countrymen and women embarrass me fairly often, but Rick Steves is different. Rick Steves embarrasses me the way my dad did in 1989 when we were taking a tour of the high school I would later attend, and when the ninth grade girl giving the tour asked if there were any questions, my dad asked, “How long are your periods?”* Rick Steves embarrasses me in the same way, most likely because something about his cluelessness reminds me of myself. He represents the U.S. that I was born in, where cultures other than my own were understood metonymically: Japanese people eat raw fish, Italian people eat spaghetti, Russian people wear fur hats. There was no malice involved in the way I was taught to view the world. At no time in my life** have I ever been told that my nationality or ethnicity is superior to others. My role models from childhood on up have always treated people well regardless of where they come from or what color skin they have. But always there was this metonymy – this expectation that people different from us (read: “us”) would always be flat and static characters on the world stage and that leading roles would always be played by white Americans.

Something really interesting happened when I was teaching Travel as a Political Act. I had four students in the class. Three were U.S.-born Chinese Americans being raised by immigrant parents; the fourth was a Caucasian boy with a Japanese name. I didn’t ask him why he had a Japanese name, and he didn’t volunteer the information. All four had traveled extensively in Asia, three of the four had been to Europe, and one had lived many years in Canada. They picked up on Steves’ biases and on the limitations to his point of view well before I did. First of all, they noticed – as I did not – that the book is profoundly Eurocentric. Of its eight chapters, four are about European countries and issues (the formation of the European Union, Denmark, the former Yugoslavia, and the European approach to controlling drug use). One chapter is a general introduction to the book, and the remaining three are about El Salvador, Turkey and Morocco, and Iran. There is nothing wrong, of course, with writing about Europe, but my students pointed out – and I agree with them – that a book published in 2009 that claims to be about how travel can influence Americans politically yet doesn’t even attempt to cover Asia, Africa, or the Israeli/Palestine conflict has got to be missing several points. My students were the ones to point out that so many of the photos were selfies. During one class meeting, a new teacher who had just been hired was observing my class as part of her training. She was 22 and had just graduated from college in Indiana. Before that, she grew up in Iraq. I lent her a copy of the book, and she flipped through it during our discussions and sometimes added her own comments. She was the one who pointed out Steves’ weird fixation on head scarves and other forms of body covering in Muslim nations. He rhapsodizes about how alluring he finds covered women in three different chapters. In one case, the caption on a photograph of a woman in a head scarf reads “and those eyes… truly a contact sport” (175).

The thing is – I think Rick Steves means well. I don’t think he means to offend anyone, and if he is aroused by covered women, who cares? It’s hardly the strangest thing a person has been aroused by. I think Steves is a joyous, happy guy who grew up believing he lived in the greatest country the world has ever seen and hasn’t done any serious questioning of that belief. His business of traveling the world to write guidebooks and produce TV specials has been successful, and he’s never been forced or even really nudged to see himself and his country from the outside in. I truly don’t think he knows how paternalistic  he looks in that photo of him with the throng of Iranian girls.

When I taught this book in class, we spent most of our time discussing history. As I expected, my students knew almost nothing about the history of countries whose present-day cultures they could discuss in great detail. They were annoyed that the first chapter of the book deals with the consequences of “some war that no one has ever heard of” – i.e. the religious war in the Balkans after the fall of the Soviet Union. So what we did was back up (I used this term a lot – each day, it usually took less than five minutes before I had reason to say, “Let’s back up”) and cover the history of each region Steves wrote about. We started at the Yalta conference and moved forward through the 20th century, through the division of Berlin, the Soviet control of Eastern Europe, the Cold War, and the power vacuum that remained in Eastern Europe after the Soviet Union fell in 1989. When it was time to cover Turkey, Morocco, and Iran, we backed all the way up to the death of Mohammad and the power struggle among his followers that led to the split between Sunni and Shia Muslims. Then we covered the Crusades, the rise and fall of the Ottoman empire, Churchill’s terrible judgment in redrawing the map of the Middle East after World War I, the power dynamics of the Cold War and the U.S. fixation on the domino theory, the Russian presence in Afghanistan, the U.S. support of the shah in the ‘50’s, ‘60’s, and ‘70’s, the hostage crisis in the late ‘70’s, the total change in U.S. policy that led us to support Iraq in the Iran-Iraq war until 1988, and our invasion of Iraq in 1991. I don’t consider any of this information to be specialized knowledge. I am not a historian, and the last time I took a history course was in high school. My students, though, were clueless, and as much as I admire their ability to think about geopolitics without worrying about centers and margins, I worry that they are growing up bereft of context – and I think this deficiency is our fault. “Our” in this case means “American educators.” In a world where we want kids to grow up without hating or distrusting people based on nationality or race, it feels dangerous to teach history, since history has a way of showcasing human beings behaving badly – and thus opens the door for feelings of hate and fear.

I became aware that of everyone in the room, I was the odd one out. I was born in the world of Rick Steves, but I am living my adult life in the world of my students. I can look at the world without an American bias, but I have to choose to do so. My natural frame of mind is to revert back to that childhood assumption that leading roles would be played by people of European descent, with all others part of some sort of global Greek chorus. To use language learning as an analogy, I still have to do some translating in my head. I’m not fully fluent in global thinking. Reading this book was an interesting experience – not because it’s a good book (it’s not) but because it’s almost an artifact of what I hope is a dwindling and dying way of viewing the world.

*He meant class periods, in case that wasn’t clear. My dad would never be rude on purpose.

**Well, there WAS that guy I met in the Army surplus store in West Memphis, Arkansas. But we don’t really need to talk about him and ruin an otherwise nice day.