For Those Who Prefer Their Life Lessons in the Form of Poultry Metaphors: A Review of Wendelin Van Draanen’s Flipped (by Bethany) 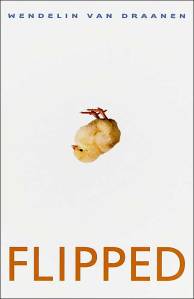 If you’ve looked at my book list recently, and if you know what’s what in the world of books and publishing, you may have noticed that I’ve read a lot of young adult novels lately. Young adult novels aren’t really my thing. I didn’t really like them very much back when I was a young adult. I remember seventh and eighth grade as very dry reading years. There was nothing new in the young adult section that interested me, and while I was intrigued by some books in the adult section, I found these dry when I picked them up and started reading. These years weren’t entirely devoid of books to love – I discovered The Catcher in the Rye and A Tree Grows in Brooklyn  in 1988 and A Separate Peace in 1989, and I snatched up other books by these authors and read them over and over and over. I also discovered Maya Angelou’s series of memoirs during these years, and while I don’t have much respect for her work now, these books were important to me back then and helped wean me away from the children’s section. Overall, though, those years were the only ones in my life when I could go into a bookstore and look around and not want anything. Those were sad years. For the most part I have no interest in reliving them.

But for the last six months I’ve been working at a learning center, teaching some classes and also doing one-on-one tutoring. My youngest student is eight; my oldest is nineteen. Most of the time, the one-on-one tutoring involves either SAT or ACT prep or helping students with school assignments and homework, but I do have a few students whose goals involve learning more about language, literature, and writing than they are learning in school, and for these students I have to put together little syllabi of sorts. For the high school students I generally use books that I’ve taught before but that aren’t taught in the Bay Area public schools – since I already have reams of teaching materials for these books on my hard drive – but for the younger students, I’ve really had to dig around to find books that are age-appropriate and challenging and worthy of discussion. And, overall, my general reaction is that most young adult books suck. There are exceptions, of course, but overall, young adult novels are exactly how I remember them from my own teenage years: dumbed down, cliché-ridden, and moralistic.

Wendelin Van Draanen’s Flipped is no exception. It is well-written and well-conceived, and I’ll be the first to admit that it’s better than much of the young adult fiction currently on the market. But this fact isn’t really a defense of Flipped; it’s a sad statement on the state of fiction geared at teenagers. Flipped is a study of point of view. Its two teenaged protagonists are Bryce and Juli, who live across the street from each other in the same bland suburban neighborhood that seems to be the setting of most young adult novels. The first chapter is told from Bryce’s point of view. He is six in this chapter, and his family is just moving into their house. His new neighbor, Juli, pops her head into the back of the moving van to say hello and promptly falls in love with Bryce. Bam – just like that: six year-old romance.

Bryce takes an immediate dislike to Juli – partly because he’s turned off by her aggressive offers of affection, but mostly because his father seems to find Juli annoying. Bryce’s father is sort of a menacing presence in the early chapters of the book. Nothing specific happens that should identify him as an antagonist, but he is finicky about his possessions as he unloads them from the moving van, and his family seems quick to agree with his every statement, probably because they don’t want to deal with whatever kinds of pressures or lectures that might be the consequence of disagreeing with him. He dislikes Juli because she roams around their new house touching everything (remember, she’s only six), and Bryce is happy to share his father’s distaste. In school, Bryce and Juli are in the same class. Juli raises her hand to answer every question, gets excellent grades, and continues her relentless pursuit of Bryce.

The next chapter is told from Juli’s point of view. Now we see Bryce through her eyes – how charming he is, how much she loves looking at him, loves his voice, loves his eyes. All of this seems a little overwrought to me, but I have known young children who have formed instant, obsessive attractions to other kids. I don’t think it happens often, but it does happen. Of course, from Juli’s perspective, she isn’t intrusive and annoying – she’s perfectly reasonable. From a literary perspective, I understand completely why sixth- and seventh-grade teachers are falling over themselves to teach this book. Because the pattern of alternating points of view continues throughout the book, kids who read it can get a clear, accessible look at how point of view shapes storytelling, and that’s great. But from a moralistic perspective, this technique gets old really, really fast. The point of the novel is clearly to teach kids that they shouldn’t judge others based on appearances and first impressions. Fine – good lesson. But I think that writers who want to teach lessons should write short stories or essays or even song lyrics. Novels that are driven by lessons have a way of becoming really tiresome, really fast.

Which brings me to the chicken metaphors. Let’s flash forward a bit: Bryce and Juli are now in middle school, and Juli is having trouble finding an idea for a science project. A teacher suggests that she get some chicken eggs and raise them in an incubator. Juli resists this idea at first because she is afraid that she might hurt one of the chickens. (By this point we have learned that Juli is really, really good. She is goodness personified and Bryce is selfishness and cowardice personified; this is yet another reason this novel annoys me.) Eventually, though, she hatches the chickens and does her science project and then gets attached to the chickens and keeps them. And then, long story short, Juli overhears Bryce saying something about how her family’s house and yard look trashy because they’re all covered with chicken crap. The child psychologist in me says that Bryce never would have noticed or said such a thing if it weren’t for the fact that his father is extremely critical of others. So Juli – ever the perfectionist – decides to clean up her yard, which prompts Bryce’s sullen grandfather to make one of his rare forays out of the house to help Juli because she reminds him of his dead wife, a fact that is recorded matter-of-factly, as if it weren’t creepy. And this begins the part of the novel where BRYCE LEARNS AN IMPORTANT LESSON about not judging people by their appearances.

I know that I promised to tell you about the chicken metaphors and that I haven’t really done so. Unfortunately, I don’t have my copy of the book right now, because on Monday night I had a book emergency. Or, more specifically, an eleven year-old acquaintance of mine had a book emergency, in that she needed to read a book and write a book report by Friday, and she didn’t have a book that she wanted to read, and I dug around in the trunk of my car and found Flipped. She was psyched about it. I hope she isn’t emotionally scarred by the number of times I wrote VOMIT in the margins.

Here’s the gist of the chicken metaphors: Flocks of chickens have an instinct to cull their weak members. If one chicken is small or weak or stupid, the other chickens peck her to death. (This same chicken metaphor, by the way, is used quite wonderfully in One Flew Over the Cuckoo’s Nest, a book that never once made me feel as if my intelligence were being insulted.) So it’s a metaphor for human cruelty and bullying and what-have-you. And it’s also a metaphor for the meanness of Bryce’s father and, sometimes, of Bryce. And then there is a hokey subplot involving a mentally handicapped individual, who of course, like Juli, is GOODNESS PERSONIFIED.

I know, I know – this book doesn’t sound that bad. I’ll be the first to admit that it has its strengths, and of course the idea that humans are often too quick to judge one another unfairly is a lesson that people need to learn, and if they have to learn it through dumbed-down young adult literature, at least they’ve learned it. I will readily admit that I have learned most of what I know about human beings from reading, yet the minute I feel that an author is trying to “teach” me something, I recoil – or, more specifically, I mock. But I really don’t think teenagers need to be preached at. When I was fifteen, I read A Prayer for Owen Meany and adored it. It immediately became my favorite book. I read my favorite parts over and over. And it was literally more than fifteen years later, once I started teaching this novel in my sophomore classes, that I figured out everything that is going on on a symbolic level in that novel. Sometimes I think that the most alluring quality in a book is the vague, nebulous sense that this book will teach me something in the future, that I am reading it now and storing it up so that when the crossroads or the challenge comes, the knowledge that I need will be there.

I know – this sounds like a bunch of pseudo-spiritual hoo-hah, right? Well, of course. Books are – if nothing else – my religion.