A Review of Adam Langer’s The Salinger Contract (by Bethany) 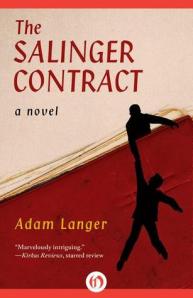 I’m not sure what made me buy this book and then read it right away – especially since I often let years pass between purchasing books and actually reading them. This book was an impulse purchase. I went into Barnes and Noble for two specific things – a guide to the U.S. History A.P. test and a Spanish-English dictionary – and managed to spend $90. This novel had been mis-shelved, and I found it in the fiction section under P for Pasternak (I bought a new copy of Doctor Zhivago because I’ve concluded that I’m never going to be able to read the copy I have because its translation isn’t good. You know me and translations.) instead of under L for Langer, and of course the word “Salinger” in the title caught my eye. I have an enormous soft spot for Salinger, in spite of the fact that his books are flawed (but beautiful) and that liking The Catcher in the Rye is such an embarrassing cliché.

This is one of those novels in which the protagonist has the same name as the author – along the lines of Arthur Phillips’ The Tragedy of Arthur and Tim O’Brien’s The Things They Carried and Philip Roth’s Operation Shylock. I’m pretty sure that Paul Auster uses this technique in at least one of those books that I read nonstop back in my senior year of college, when I should have been doing something more productive with my time, like getting a job or trying to get something higher than a B- in the bonehead physics class that I had put off until the spring of my senior year. I’m not sure how I feel about this technique. Obviously part of its intention is to blur the lines between truth and fiction. The Salinger Contract also blends the names of real novelists (Salinger, Harper Lee, Pynchon) with fictional ones, suggesting (I guess) that this novel exists in a world that in some ways is identical to the real one but in somehow skewed or distorted.

The Adam Langer who is the protagonist of this novel is a writer and stay-at-home dad (his kids’ names are Beatrice and Ramona – a reference that made me sit up straight in my chair and take notice; my [correct] assumption was that this novel would be playfully allusive and would reward a reader with a broad knowledge of a variety of literary genres). He has just moved to Bloomington, Indiana, where his wife Sabine has received a tenure-track job teaching at Indiana University. He and his wife run a blog called Buck Floomington (a great name for a blog, no?), in which they lampoon the various quirks and sins of Sabine’s university colleagues. Adam is a Chicago native with a tenuous relationship with his mother, who was angered and hurt by the content of Adam’s first (and only) novel, in which he used real names, places, and events, just as his real-life counterpart may or may not be doing in this novel.

Enter Conner Joyce. Conner is a successful writer of crime novels. Langer met him several years before the novel begins, when the magazine he was working for assigned him to profile Conner. Both men were left with favorable impressions of the other, leading Adam to attend a reading Conner gave in Bloomington. When they chat after the reading, Conner reveals that his work is at a standstill and that he isn’t sure whether he will continue to write the crime novels that have made him famous.

After this reading, Conner continues to get in touch with Adam and begins telling him a wild and implausible story about two mysterious men – the elderly, fastidiously dressed, and staggeringly wealthy Dex Dunford and the mysterious Pavel, Dex’s scary eastern European bodyguard. Dex is a manuscript collector who specializes in a specific type of manuscript: novels that have been written expressly for him by famous writers. He offers each author an enormous sum of money (in Conner’s case the sum is $2.5 million), and the writers are expected to write their novels longhand or on a manual typewriter so no copy of their work can be saved. Dex’s thrill comes from the fact that he owns the only copy of novels by many of the greatest writers of our century – J.D. Salinger, Harper Lee, Thomas Pyncheon, and others.

Of course, the $2.5 million payment does not come without strings. Conner agrees to Dex’s offer and writes his novel for Dex with relative ease, in spite of the fact that he finds the entire situation creepy. His novel involves the theft of USB drive containing an unpublished manuscript by the larger-than-life vampire-porn-writing multi-millionaire Margot Hetley, who seems to be a bit of an amalgamation of Charlaine Harris and Stephenie Meyer. As a skilled crime writer, Conner researches this scenario meticulously and writes a plausible novel that is essentially an instruction manual on how to commit this crime. And – not long after Conner delivers his manuscript to Dex – this exact crime is committed, in precisely the way that Conner outlined in the secret manuscript that no one knows about except Conner, Dex, and Pavel.

So now we start to understand Dex’s motives. Each of the private manuscripts he has committed is a crime story (Salinger’s is called The Missing Glass – I love that detail), and shortly after receiving each manuscript, Dex and Pavel committed the crime it described. He counts on his novelists for their creativity and research skills, and he gets a power trip both from manipulating the novelists and from committing the crimes themselves. So far he has never been caught.

There is more to the story (just wait until you find out who Adam’s real father is!), and this book is a good read, although I wouldn’t say that it stands out from all the other “good reads” that line the shelves of bookstores. On a scale from one to ten, it’s about a 6.1. What intrigues me about this book is not its plot or characters but the assumption that it seems to be making that people care enough about books to kill, maim, and steal over them. In real life, if you mention Thomas Pyncheon on the street to the average American, your reward would be a blank stare (I’m BUSY, dude. I’m on my way to upgrade my iphone, and you’re bugging me about some guy I’ve never heard of??). In this novel, literature is a matter of life and death – which makes the book, essentially, a comedy.

There is nothing earth-shattering or brilliant about this novel, but it’s entertaining enough. In addition to the plot I outlined above, it’s also about fame and creativity and hero-worship and marriage and the departmental politics of academia. It’s also about the relationship between artists and the public, and one of its consistent themes is the question of why some writers become recluses – a topic that has always fascinated me. I don’t entirely recommend this novel, but if you enjoy feeling smart as you decipher a wide range of literary allusions, you might enjoy it. This novel appeals to the kind of reader who enjoys Laurence Cossé’s The Novel Bookstore, another suspenseful novel about the silly idea that ordinary people care about novelists and novels.

This entry was posted in Adam Langer, Authors, Fiction - general, Reviews by Bethany. Bookmark the permalink.