It’s A Christmas Miracle! A review of Julian Barnes’ The Sense of an Ending (by Jill) 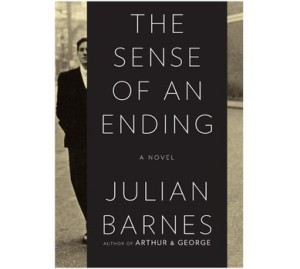 It’s interesting that this book came along when it did, while I am in the midst of re-reading a bunch of books I first read as a teenager.  It is a meditation on memory and is not that heavy on plot, though there is one that pops up from time to time.  This book won the Man Booker Prize in 2011 (so it’s gotta be good, right?) and is teeny-tiny at 163 pages.  It’s dense, though, and I found myself wanting to underline every sentence and mark every paragraph as something to look back on and reread later.  There’s not a word wasted, not a sentence that isn’t important.  Books like this are, for me, more difficult than long ones.  You really have to engage with every single word or else something gets missed.  And I’m not going to lie; sometimes I space out a bit when I’m reading, especially when it’s bedtime and it was a long day.

I did enjoy The Sense of an Ending.  I find myself not infrequently thinking about memory and time much like Tony, the narrator of this book, did.  How trustworthy is memory and how complete?  When I was a kid I wanted to write down every single mundane detail of every single day of my life because I did not want to forget anything that I said, did, or thought.  I never did do that, though I was a pretty dedicated diary-writer for quite a while.  I remember thinking that the important stuff would stay.  It didn’t, of course, but by now I’ve forgotten what I forgot so it’s okay, I guess.  But sometimes it still bugs me.

Tony, our narrator, is a retiree somewhere in his middle sixties.  He has lived his life, nothing special, really, but is at that age when time begins to press down on a person.  Here, for example, is one of the opening paragraphs of the book: “We live in time—it holds us and moulds us—but I’ve never felt I understood it very well.  And I’m not referring to theories about how it bends and doubles back, or may exist elsewhere in parallel versions.  No, I mean ordinary, everyday time, which clocks and watches assure us passes regularly: tick-tock, click-clock.  Is there anything more plausible than a second hand?  And yet it takes only the smallest pleasure or pain to teach us time’s malleability.  Some emotions speed it up, others slow it down; occasionally, it seems to go missing—until the eventual point when it really does go missing, never to return (pp.3-4).”  It’s just sort of beautiful and hopeless, don’t you think?  The first part of the book Tony spends in reflection on key memories of his secondary school and university years.  The most important folks in these memories are Adrian and Veronica; Adrian is a friend from secondary school and Veronica was his (and later Adrian’s) girlfriend at university.  There are other friends, but they don’t really stand out to me and don’t figure in the plot.

Veronica is something of an enigma to me; most likely because she is being remembered through Tony’s eyes, and everything a woman does is endlessly confusing to a man, especially a man in his early twenties.  He describes their relationship in some detail, but it just doesn’t seem to me that he liked Veronica much.  I didn’t understand why he stayed with her as long as he did.  I wish I could have gotten into her head a bit to get her impressions of events.  But not knowing what is going on in her head is kind of the point.  The gist of the Tony/Veronica situation is that they are together for a while, meet each other’s families, and then break up.  And then they have sex once.  And then Veronica takes up with Tony’s good friend Adrian, and then Adrian commits suicide.  These are the facts…  And they are undisputed.  (Quick!  What Tom Cruise movie was that from??)  It’s the gray areas between those big events where this novel focuses, the areas where everything that happens is a matter of perception.

The crux of the whole love triangle is reduced to a single line in Tony’s version of events: after Adrian writes him to ask permission to date Veronica, he is angry.  He writes a letter described as follows: “As far as I remember, I told him pretty much what I thought of their joint moral scruples.  I also advised him to be prudent, because in my opinion Veronica had suffered damage a long way back.  Then I wished him good luck, burnt his letter in an empty grate (melodramatic, I agree, but I plead youth as a mitigating circumstance), and decided that the two of them were now out of my life for ever  (p. 46).”  The big reveal about this letter is that it is so much worse than Tony remembers, thus determining that he is an unreliable narrator, though who would be a truly reliable narrator when looking back at events from forty years ago?  Here’s a snippet from the actual letter, which Veronica saved.  Let’s put it this way; after Tony finishes reading the letter for the first time in forty years he switches from wine to whisky.  “How often do we tell our own life story?  How often do we adjust, embellish, make sly cuts?  And the longer life goes on, the fewer are those around to challenge our account, to remind us that our life is not our life, merely the story we have told about our life.  Told to others, but—mainly—to ourselves (p. 104).”  Here’s another quote that I quite liked from Tony’s reaction to the letter.  “My younger self came back to shock my older self with what that self had been, or was, or was sometimes capable of being.  And only recently I’d been going on about how the witnesses to our lives decrease, and with them our essential corroboration.  Now I had some all too unwelcome corroboration of what I was, or had been.  If only this had been the document Veronica had set light to (p. 107).”

Now, really here’s the stuff from the letter.  “Well you certainly deserve one another and I wish you much joy.  I hope you get so involved that the mutual damage will be permanent.  I hope you regret the day I introduced you.  And I hope you break up, as you inevitably will—I give you six months, which your shared pride will extend to a year, all the better for fucking you up, says I—you are left with a lifetime of bitterness that will poison your subsequent relationships….  Adrian: you already know she’s a cockteaser, of course—though I expect you told yourself she was engaged in a Struggle with Her Principles….  If she hasn’t let you Go All the Way yet, I suggest you break up with her, and she’ll be round your place with sodden knickers and a three-pack, eager to give it away….  Compliments of the season to you, and may the acid rain fall on your joint and anointed heads… (pp. 104-106).”  I’m sure there’s more malicious things written in the English language.  But this is the most mean spirited thing I’ve read in a while.

The big mystery at the end is why does Veronica’s mother die and leave Tony five hundred pounds and Adrian’s diary?  Why won’t Veronica give it to Tony?  This part of the whole thing is much less interesting to me than the melodrama that unfolded when the characters were younger.  I really wanted to know why the heck Adrian committed suicide and what was in his diary and why Veronica’s mom was even involved (we find out the answer to that question, but Adrian’s death is left as a mystery never to be resolved).  The most interesting parts of this book to me are Tony/Julian Barnes’ mediations on memory.  They are most prescient to me these days as Bethany and I work through the AP English Challenge.  Memories of high school never were closer and also further away.  I never thought that I’d forgotten so much about the books I read, the discussions we had, the life I led.  The emotions are never far away; I can remember how I felt when I didn’t get into Stanford but I can’t for the life of me remember what I thought about Hedda Gabler.  I know I read it, because I remember all the books I didn’t finish in AP English.  It’s increasingly interesting to me that I remember more about books I never read than about books I actually read from cover to cover.  What the heck does that mean?  I don’t know.  But I do know that after reading The Sense of an Ending I’m not alone in this fascination with memory.  And that is reassuring.  I often worried I was a bit crazy.

Concluding thoughts?  I would consider buying this book so I can read it again someday.  That’s high praise for someone who used to swear that rereading a book was a waste of time.  2012 has been a wacky, wacky year.

Oh, and that quote was from A Few Good Men.  Said by Kevin Bacon’s character, Captain Jack Ross.

5 Responses to It’s A Christmas Miracle! A review of Julian Barnes’ The Sense of an Ending (by Jill)