In Which the Proprietors of Postcards from Purgatory Give Themselves an Early Christmas Gift: Pre-reading notes on Ibsen’s A Doll House and Hedda Gabler. (By Jill) 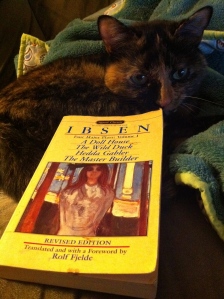 Here is what I have to say about our December AP English Challenge title: THANK THE LORD IT’S NOT A GIANT NOVEL.  It’s a total of 154 pages in a mass-market paperback edition of Heinrik Ibsen’s collected plays.  It’s like heaven.  We haven’t had a short book since we read Measure for Measure back in July.  It’s a good break before we get into our dead of winter reads, The Portrait of a Lady, Anna Karenina, and Great Expectations.

What I remember about these two plays from high school is not much.  I remember enjoying them, A Doll House somewhat more so than Hedda Gabler, but I couldn’t for the life of me tell you why.  I seem to remember that there was much discussion about whether or not the title was A Doll House or A Doll’s House; Fr. Murphy had many things to say about that particular issue, but I don’t remember what exactly he had to say.  I also know that definitely A Doll’s House, and possibly also Hedda Gabler, have strong female characters, which I always like, and possibly they portray women differently than they had been portrayed in literature prior. I have not thought much about these plays at all since high school, or about Heinrik Ibsen, either, except when I see my adorable patient, a Cocker Spaniel named Ibsen (yes, named after this Ibsen) whose nickname is “Ibby.”  How cute is that?  I may have written a paper about A Doll House.  I may have written about it for one of my essays on the AP English test.  I definitely wrote an essay about The Glass Menagerie for the AP English test that I was very proud of.  But surely I would not have written about two plays on the AP test?  I don’t know.

In other news, my high school copy of Ibsen, Four Major Plays: Volume I seems to have stood the test of time quite well.  It is not in horrid shape like Jane Eyre; it does not have a ruined binding like The House of the Spirits; it is not missing like Lord Jim. Nor is it yellow and musty.  Finding books with these characteristics on my shelves that I bought brand new makes me feel old.  It also, like my copy of Jane Eyre, contains a ticket stub from a 49er game.  Apparently I spent a lot of time doing homework at 49er games when I was a high school senior.  As my mom would say, at least I was outside getting some fresh air.

I am looking forward to reading these two plays by what is supposedly one of the greatest playwrights of the nineteenth century and one of the founding fathers of realism in the theatre, and not just because they are short.  I think that the length and pace of plays must make them inherently more difficult to read thoroughly like one would read a novel.  So this, for me, is also going to be an exercise in careful reading of something short.  And maybe I’ll also spend time thinking about Flaubert, and how he was the father of realism in the novel, and how Ibsen’s female lead characters compare to my arch-nemesis, Emma Bovary.

That’s my copy of Ibsen’s Four Major Plays, and that’s my cat, Scarlett O’Hara posing with it.  Isn’t she cute?