I Can’t Quite Believe I’m Beating Jill to the Punch on this One: Thoughts on Part One of Jane Eyre (by Bethany) 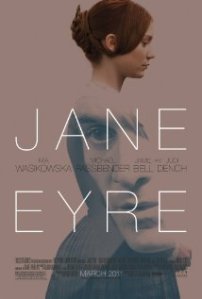 OK, the title of this post is a little misleading. I have no doubt that Jill has finished Jane Eyre by now – or at least is very, very close and will do so tonight while it is still November. Because it’s one thing to fail to finish books on time when one is eighteen – but at thirty-six? Totally, totally irresponsible. And Jill is never irresponsible.

I know, you don’t really want to hear my excuse. But I’m going to tell it to you anyway. I’m moving, and have been moving since pretty much forever. I’m in a Holiday Inn Express in Willcox, Arizona right now, and in a minute I’m going to tell you what I thought of Part I of Jane Eyre. And yes, this does mean that I haven’t finished Jane Eyre yet, and I am very sorry. I’m planning to finish it by Wednesday of next week – or Thursday at the latest. I am enjoying it quite a lot, but there is something about nineteenth-century novels that doesn’t mix well with endless trips to Wal-Mart for more boxes and tape and with eyes that are tired at the end of the day from squinting into the sun and with spending all 900 miles of I-10 in Texas being pretty sure that having Connecticut plates is against the law in that state. Strangely enough, Diana Gabaldon’s lousy The Fiery Cross goes just fabulously with all of the above. Go figure.

And did I mention that I injured both my knee and my thumb in the moving process? I did. These injuries have nothing to do with why I haven’t finished Jane Eyre, but they do provide a reason for you to feel sorry for me. Especially for the thumb – it still hurts.

The first thing that struck me about Jane Eyre (which I have not read or even thought much about since AP English) is how easy it is. It was first published in 1847, which apparently is just a few years too early for that dense, laborious sentence structure that seems to characterize the novels of the late 19th century. It’s funny how the novels of the early 19th century – Jane Eyre, Wuthering Heights, all of Jane Austen, Frankenstein – feel quite a bit more modern both in prose and in subject matter than the novels of the second half of the century. OK – maybe Jane Austen doesn’t belong on that list:  her sentences can be pretty indirect and heavy on the subordinate clauses. I’ll have to think about that one. But Jane Eyre definitely has a modern feel. Here’s the opening paragraph:

There was no possibility of taking a walk that day. We had been wandering, indeed, in the leafless shrubbery an hour in the morning; but since dinner (Mrs. Reed, when there was no company, dined early) the cold winter wind had brought with it clouds so somber and a rain so penetrating that further out-of-door exercise was now out of the question.

Sparse, no? Except for “indeed” and the British spelling of “somber,” that paragraph could almost have been written by Hemingway. I was surprised. The syntax does get a little more complex later on, but not much. I think part of the reason for the directness of the language is the fact that the novel is told in the first person by the much-older Jane Eyre, whose personality is dominated by directness. The whole point of Jane is that she doesn’t play games with the truth: that’s why she gets in trouble with Mrs. Reed in the opening chapters, and it’s why Mr. Rochester later finds her so appealing. When taken to extremes, convoluted syntax can be a way of playing games with truth. A sentence can be true and wise, but if it’s not clear, or if it’s so dense that it requires an advanced education to read it, the truth it contains is irrelevant. Not everyone in the nineteenth century knew that, apparently.

The maudlin display that is the life and death of Helen Burns struck me as fishy when I was seventeen and still strikes me as fishy now. I’ve already written that Pat Conroy is terrible at writing the voices of children, and I think I forgot to tell you (but I should have) that Diana Gabaldon is terrible at writing the voices of children in The Fiery Cross, but I think Charlotte Bronte may take the prize for Helen Burns, Jane’s thirteen year-old classmate at the Lowood School who appears briefly at the beginning of the novel to dispense spiritual wisdom, sing the praises of Samuel Johnson’s Rasselas, and then wither away and die (of consumption: Helen’s death is not to be confused with the typhus epidemic that carries off half the school –  obviously a terrible thing to have happen in real life, but in the novel it kind of made me giggle. As a former teacher and administrator in boarding schools, I was thinking What a PR nightmare!  That’s way worse than the bedbug infestation we dealt with back in ’09 – I wouldn’t want to be the one to take the parent phone calls about that one). And why can’t Helen Burns keep her drawers organized? These pathetic Lowood School kids have maybe three pieces of clothing apiece. This girl is Mother Teresa, for God’s sake – what’s so hard about folding a couple of sackcloth undershirts?

I know – mocking a dead thirteen year-old, even a fictional one, is low, and I agree. But remember, I’m moving. And my thumb hurts.

In all seriousness, once Jane Eyre is settled at Thornfield Manor as the governess to little Adela, the novel really does become quite wonderful. Jane meets her employer, Mr. Rochester, in Nick-meets-Gatsby fashion (knowing of him, but not recognizing him) when he falls off his horse and sprains his ankle, and he is immediately struck by her and suggests that she is some kind of “fairy creature” – by this, he is partly referring to how small and sparse Jane Eyre is, having spent much of her life in partial starvation, but also to the strange preternatural confidence she shows when she insists on helping Mr. Rochester with his injured ankle. He later seeks out her company often, insisting on knowing the details of her life (and accepting nothing less than candor) and telling her some of the details of his. Then she saves his life when Thornfield resident Grace Poole laughs her creepy laugh in the middle of the night and then – poof! – Mr. Rochester’s bed is on fire. The dynamic that is being set up between Rochester and Jane is very clearly the older-privileged-but-damaged-man meets younger-not-privileged-but-self-assured-woman archetype that has become almost comically familiar in popular fiction: sort of a proto-Fifty Shades of Grey, but without the helicopter. And without various other things as well.

Fairly soon after they get acquainted, Jane muses, “I knew the pleasure of vexing and soothing him by turns; it was one I chiefly delighted in, and a sure instinct always prevented me from going too far beyond the verge of provocation I never ventured; on the extreme brink I liked well to test my skill.”

(Too many semicolons, I know. I’m ignoring them and hoping they will go away.)

This dynamic also has a lot in common with the relationships in many vampire novels – and you know how much we like vampire novels here on Postcards from Purgatory (or if you don’t, you can read about them here, here, and here). Is this part of the reason that you like this novel so much, Jill?

I know that this is kind of a silly review – and silly is fine and good if one has actually read the entire novel, which I haven’t. But I am enjoying the book and will make it my top priority as soon as I arrive at my destination on Sunday night. I’ll post a real review soon, with less sarcasm and more insight, more textual references and fewer parenthetical asides about bedbugs. I promise.

8 Responses to I Can’t Quite Believe I’m Beating Jill to the Punch on this One: Thoughts on Part One of Jane Eyre (by Bethany)