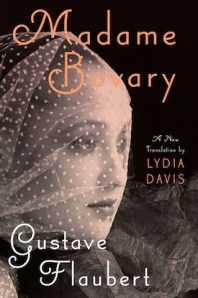 Let me tell you what I know about Madame Bovary.  There’s a married French woman and she has an affair.  This was assigned, as Bethany said, as extra credit at the end of the fall semester of AP English.  I bought it, intending to read it and take the test in order to get enough extra credit points to raise my high B to an A.  But life being what it was in the fall of 1993 (more on that another day), time got away from me and I found myself reading the Cliff’s Notes for the book the night before the test rather than reading the book itself.  And you know what?  I did well enough on the test to bump my grade up to an A for the semester.  At the time, that was the important thing.  But Madame Bovary has stayed in my mind over the years and I’m glad to finally be forced to read it.  Possibly my pulling off of a decent grade on a test I had not read the book for (this was something I had never done before, and realy haven’t done since) was one of the reasons why I finished so few of the assigned novels in the spring.  Either that or I had the dread malady that affects all high school seniors, called “senioritis.”  I hated that term, and I still do.  Why would imminent departure from a place make a person want to not work as hard as she or he always has?  I don’t get it.  But I digress.

I have no hostility, or even any particular feelings, for this book (unlike several others that are part of the AP English Challenge), which is a nice change of pace after last month’s emotional turmoil.  I’m hopeful that I enjoy it, and hopeful that Bethany’s suspicion that the translation I have (from 1950) will be difficult going is unfounded.  It’s the Penguin edition from 1993, or whenever, that I bought back in the day.  It is clean and tidy, and was obviously not carried around or otherwise abused by sixteen year old Jill (she was hard on books, that one).  The pages aren’t even yellowed!

I also meant to read this over Christmas break 1993-94.  I didn’t even try to, preferring to read several Anne Rice books I got for Christmas instead.  There will be more, much more, to come about what I did over that Christmas break when we read Crime and Punishment in a few months.  But for now suffice it to say I was not reading for school.

So that’s sort of all I’ve got to say about Madame Bovary for now.  I’m going to start it as soon as I finish Travels with Charley, which I am definitely enjoying.  It is an excellent reintroduction to John Steinbeck after staying far, far away from his books since I had to read Of Mice and Men when I was a freshman in high school.  He’s kind of a funny guy.  I don’t remember Of Mice and Men being funny.  But then it is a book that revolves around a mentally challenged man who makes friends with a mouse and then kills it.  That does seem like it would be amusing.  But more on Steinbeck in a few days.  For now, let’s all get pumped up for French novels read in various translations!